6 Anime To Watch If You Love Guilty Crown

The guilty anime crown is set in the future and follows a tragic story of an Apocalypse, which takes place because of a Virus. The virus spread deadly throughout Japan on December 24, 2029—the day that came to be called the “Lost Christmas”—killing off its population and ushering about complete anarchy in the nation. The UN sends the GHQ to help with the situation by suppressing the epidemic while abolishing all political independence in an attempt to re-establish order. Ten years later, the nation is still governed by them and incapable to overthrow their repressive regime.

A rebel group called the Funeral Parlor was disgruntled with the condi on of the nation and wanted to free Japan from the control of GHQ. The team plans to acquire a bottle carrying the “Void Genome” in order to forward their plans, under the idealized influence of Gai Tsutsugami. The Online singer Inori Yuzuriha receives the bottle, and the Anti-Bodies troops of the GHQ begin to pursue her. She finds sanctuary in a workshop after running out of places to go and befriends Shuu Oum- a shy high schooler who is crazy about her music and loves to hear.

When Shuu saves Inori, he is immediately drawn into the battle, and the Void Genome breaks in his palm, giving him the “Power of the Kings.” Shuu now has to struggle to free Japan from its terrible tyrants while understanding how to harness his absolutely fantastic power.

The anime is filled with action and drama. The anime is an amazing choice for those who are into action anime. The fiction-based plot wins the hearts of the watchers through its tight plot. The original television adaptation follows 22 episodes, with a duration of 24 minutes per episode. The anime can be found on Funimation and Netflix.

1. Darling in the Franxx The anime follows a tragic series of events that take place in order to save humanity. The plot is set in an advanced period of time when humanity is in crisis and on the borderline of disappearing. The creatures responsible for the chaos are the deadly monsters- Klaxosaurs. The ugly monsters are facing the left population to restrict themselves in huge fortress towns which are called- Plantations.

The children who are trapped inside these plantations are made mandatory to train as pilots to handle massive mechas called FranXX. The training is done in a pair of a boy and a girl. The giant mechas are the only method known to fight these monsters and keep everyone safe. This has made the children completely unknown to the outer world. Their knowledge only comprises the dynamics to operate the machines. They only survive to defend their people.

It’s not however easy to pass the test to become a pilot. The same happens with Hiro, who is an aspirant. His dreams are shattered when he fails to clear the exam. Due to breaking down, he escapes from his graduation ceremony and goes to a forest lake. There she meets a completely stranger girl. Her appearance was also different as she has two horns on her head.

She doesn’t tell him her real, instead uses her codename- Zero Two. She further adds that it is after a notorious pilot, who was known as Partner Killer. Before he could interpret anything, an attack by the deadly monster- klaxosaur breaks down upon the Plantation. Zero tries to help him into her FranXX but it turns out for the worse as it crashes near him. She offers to Hiro to join her and act as her partner. The duo puts an impressive fight against them and manages to take over the monsters. Hiro gets a new chance in life as he begins to work with a new partner.

The anime is well known for its uptight plot, comprising of real-life experiences. The characters are enthusiastic and keep the action and drama active. For lovers of action and drama, anime is a great choice.  The original television series was released in 2018, consisting of a total of 24 episodes with a runtime of 24 minutes for each episode. The anime is streaming on various platforms like Bilibili Global, Funimation, Crunchyroll, and Netflix.

2. Code Geass: Lelouch of the Rebellion 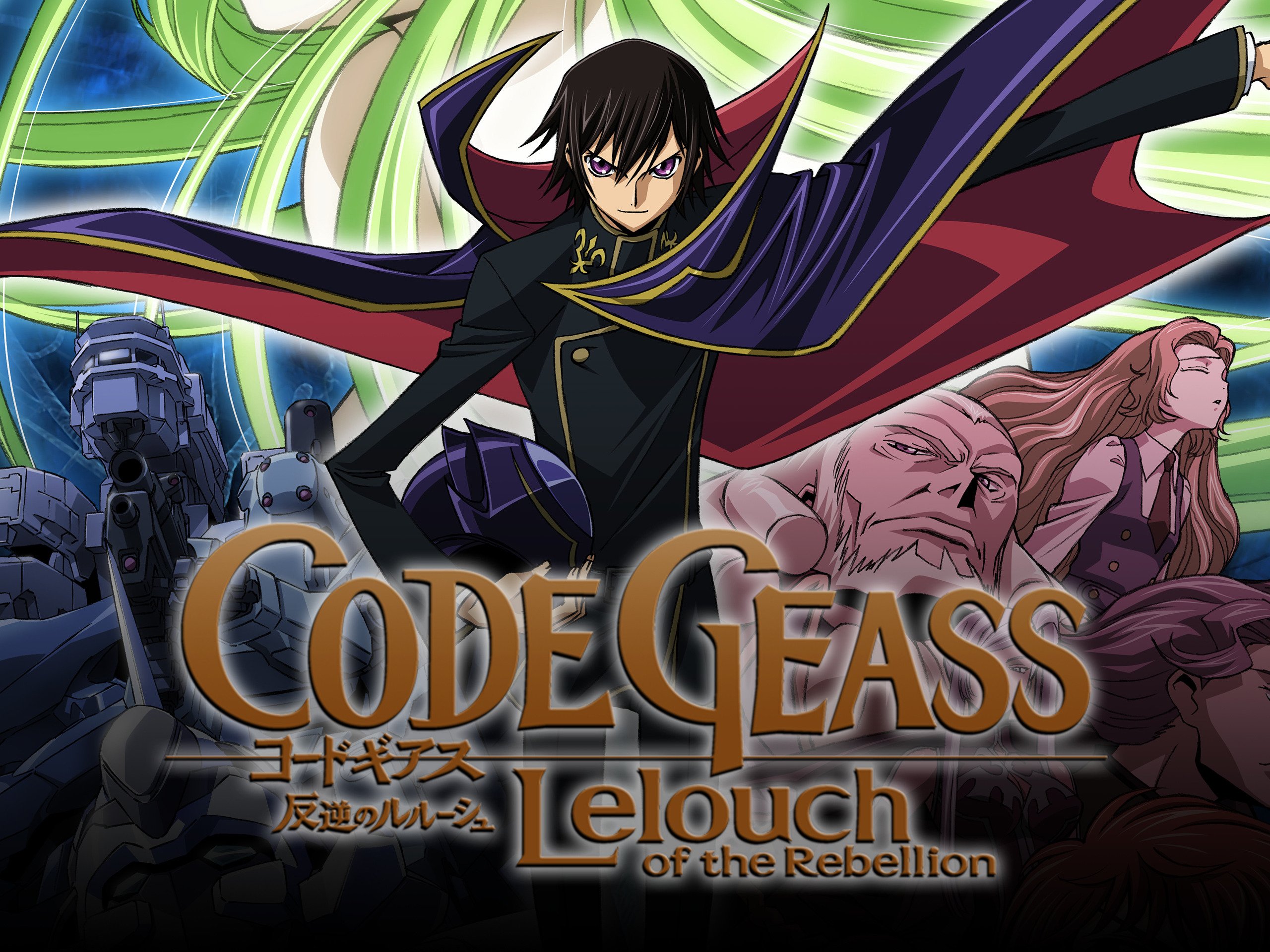 Right after the conquering of Japan in the year 2010, the Glorious Empire of Britannia asserted itself as a powerful armed force. After being swiftly defeated, Japan was given the new moniker Area 11, and it has faced stiff opposition from these despots in an effort to reclaim its liberty.

A teenager from Britannia named Lelouch Lamperouge unluckily discovers himself trapped in the conflict between the forces of Britannia and the Area 11. But he is capable of escaping when a strange female named C.C. shows up just at the right moment and gives him Geass, the “Power of Kings.” Lelouch sets off on a risky voyage as the hooded superhero called as Zero, launching a savage campaign against Britannia in order to get vengeance after recognizing the enormous opportunity of his newly discovered talent of unquestioning obedience.

The anime aired from 2006 to 2007. The anime series presents us with excellent action content as raging wars take place between opponents, in order to claim victory over Japan. The characters shown are also strong and lively, which adds more composure to the anime altogether. The anime is binge worthy if you love watching fiction and action. The original television comprises a total of 25 episodes, with a runtime of 24 minutes each. The fiction based anime can be found on Crunchyroll, Netflix, and Funimation. 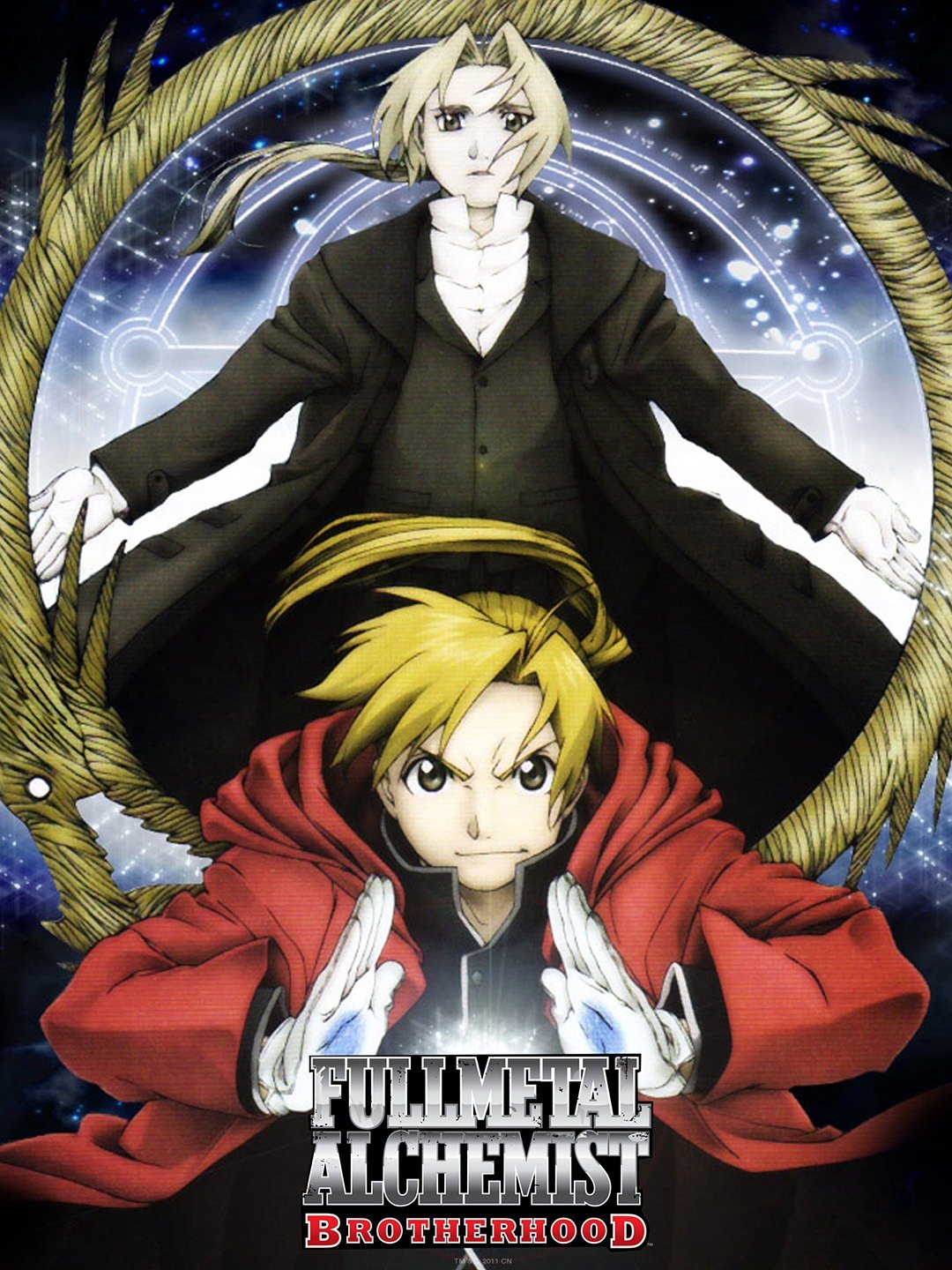 The anime was released all the way back in 2010 but is still highly loved because of its interesting plot, and evergreen theme. The anime follows a tragic yet adventurous story of a pair of brothers, who go to extreme lengths to carry out their experiment on alchemy. They completely ignore the rules and warnings, and despite them, carry on the experimentation to revive their dead mother.

They faced the consequences as well, as the mission ended up as a failure, causing massive damage to them. Alphonse’s whole body was broken down to pieces, and Edward on his part lost one leg. To make things more miserable for him, he had to sacrifice his one arm, to keep his brother- Alphonse’s soul together somehow. To a little relief, they receive help from their neighbor and his grand daughter. Winry who is a bio-mechanical engineer by specialization makes an armored suit for Alphonse, and limbs for Edward. The metal used was very strong- automail- the one which is used for the production of robots and in aircraft.

Disappointed by their physical losses. They decide to change to back to their normalcy. After a lot of research and patience, they finally perform another experiment, this time focusing on Philosopher’s stone. As they begin their journey they discover more potential dangerous exposing threats to the planet. The brothers in this way find themselves facing major problems.

The anime takes after manga and the television series has aired a total of 64 episodes. The duration of each episode is around 24 minutes. It depicts brotherhood, and passion for each other alongside action and interesting drama. The anime is streaming on multiple platforms for fans to watch like- Crunchyroll and Funimation. 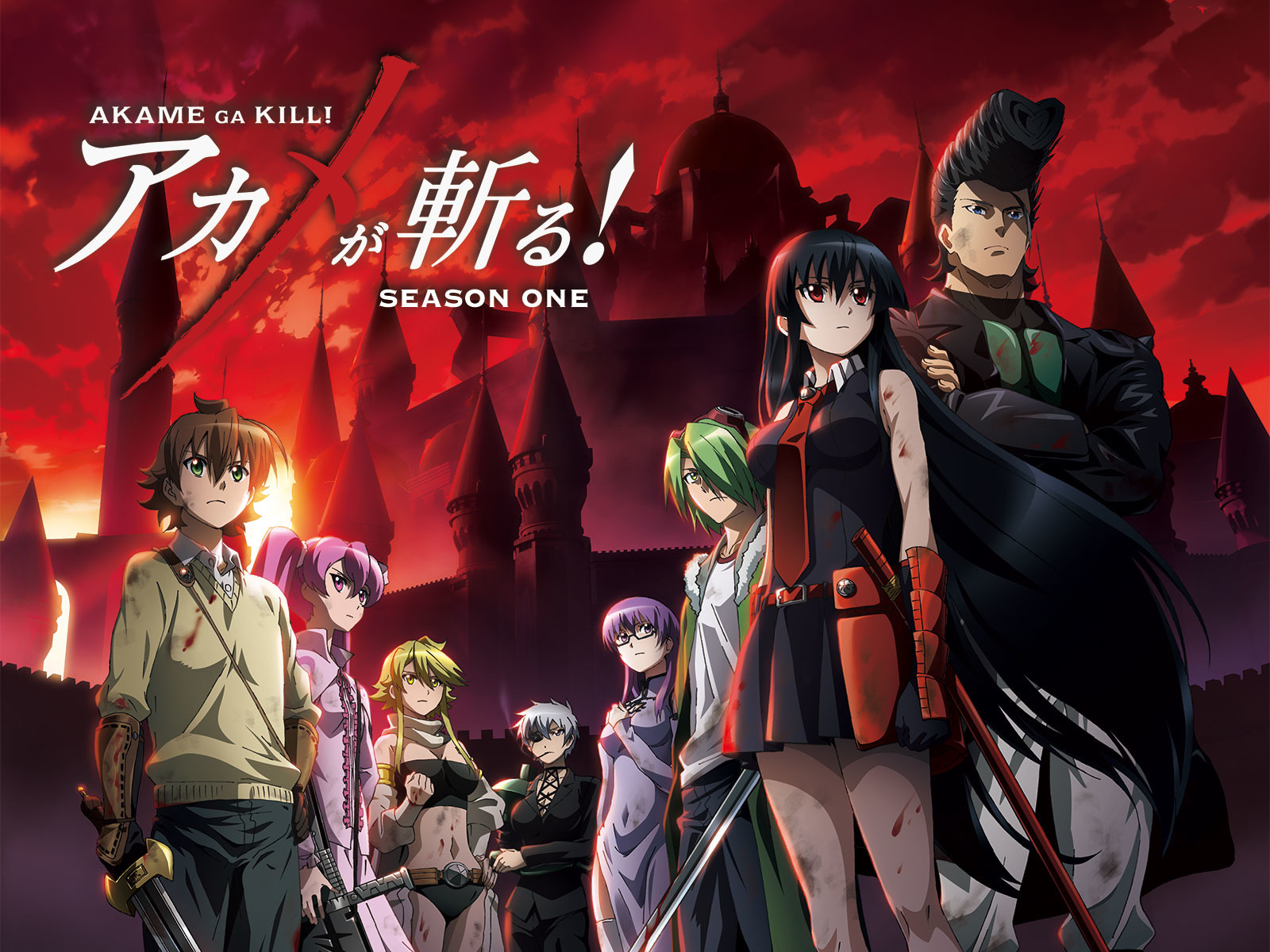 The sly Minister Honest conduces the nation secretly from the darkness with perverse principles and zero regard for humans. He takes advantage of the ignorance of the new, youthful Emperor. As a consequence, crimes, vices, and corruption have become pervasive in the country’s capital city. The end result is eventually, the powerful now maintain complete dominance over the weaker section of the society.

Nonetheless, a group called Night Raid, an undercover wing of the oppositional Revolutionary Army, continues to fight this widespread exploitation of power. It is made up of a small group of ruthless killers that assassinate anyone who encourages or covers up the horrible misdoings of the State.

Tatsumi is a naive, inexperienced man with a sword who is on a mission to defend his failing village.  The journey is not as easy as he thought. Eventually, he experiences direct brutality and terrible tragedies in the city. Hatred-filled Tatsumi resolves to accompany Night Raid and start on a challenging and hazardous operation to take vengeance on Minister Honest after becoming persuaded by their persuasive purpose. Tatsumi acquires many priceless lessons as he explores the morality of competing ideologies and considers issues of death and life. He also works to make society more compassionate. The anime Sword Art Online takes us into a world that completely exists virtually. Players from all across the world have had access to an entirely immersive virtual reality from the moment the revolutionary NerveGear was released. It is amongst the many newest videogames on the system, Sword Art Online (SAO), allows players to enter the marvelous realm of Aincrad- a colorful historical setting where their creativity only limits them. From the introduction of this global event, virtual gaming has become as authentic, as it could be.

Nonetheless, the creator of the virtual world SAO imprisons hundreds of gamers within the virtual game. the beautiful vision quickly turns into a violent dream, leaving one and all in surprise. The sole way out is to finish all the tasks which are one hundred in total and also to face extremely competitive stages of Aincrad because the “log-out” option has indeed been removed. All in-game kill becomes real, finishing the player’s existence in the real world. This rule adds more burden to the plate.

However, Kazuto “Kirito” Kirigaya had the blessed luck to participate in the competition’s beta testing, early only he realizes that, in spite of all his privileges, he cannot absoluetly navigate SAO’s dangers by himself. Kirito puts forth an effort to greet the apparently mindblowing challenges head-on by teaming up with Asuna Yuuki as well as other impressive players. But Kirito finds out that these things are much simpler said than done because non supportig superiors and dangerous shadow organizations are acting as hurdle for their growth.

The anime was released a decade ago and is well known for its action-based plot. The uptight storyline always gets the fan. For those who enjoy watching action-based anime, Sword Art Online is a binge-worthy series. Following a light novel, the television adaptation follows a total of 25 episodes, with a runtime of 23 minutes each. The anime is streaming on several platforms like Netflix, Funimation, and Crunchyroll. 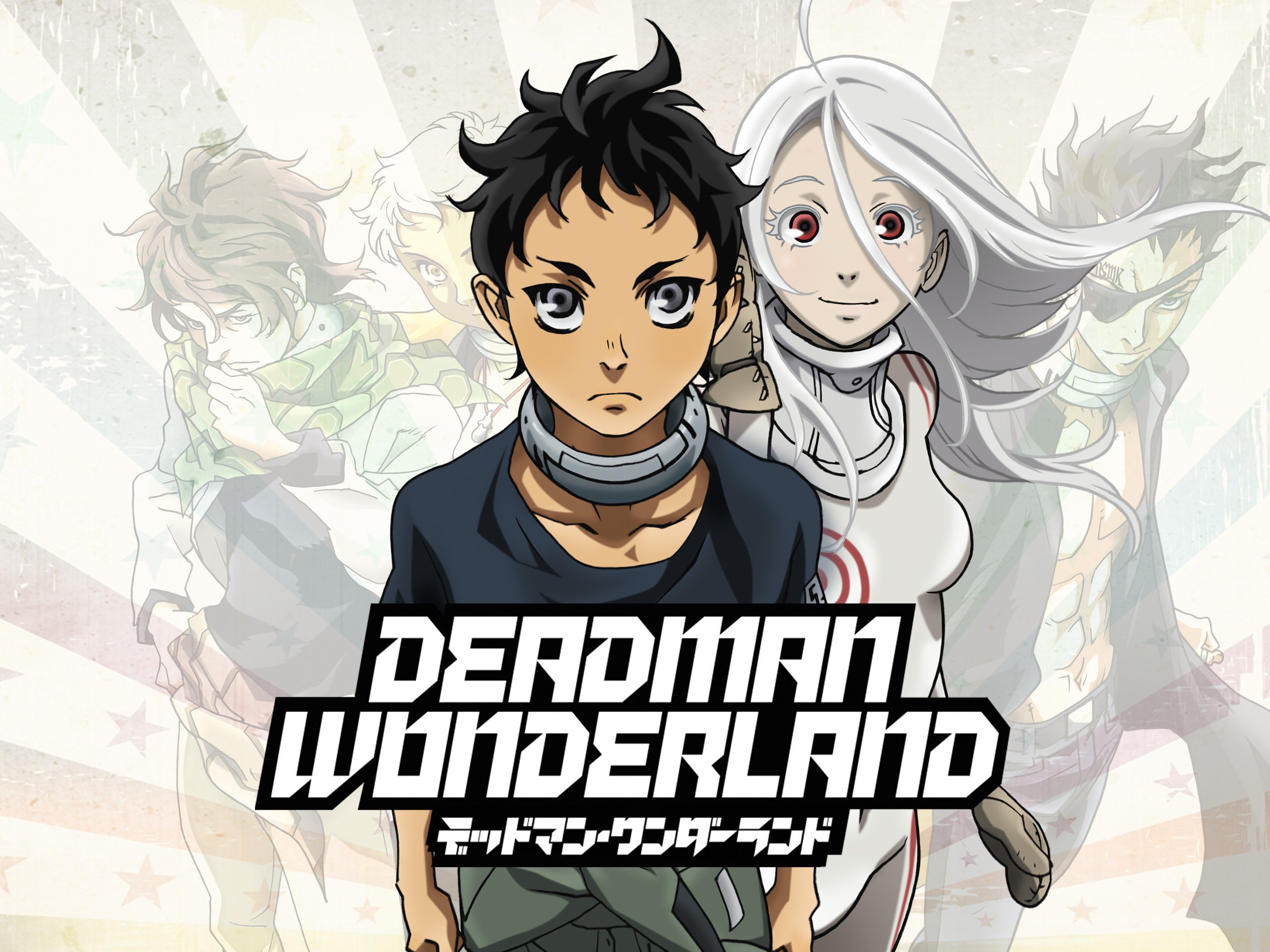 The anime Deadman Wonderland has gathered acknowledgment for its amazing plot and characters. The story involves a school trip, which goes terribly wrong, shaping the lives of young Ganta. Like any other high school student, Ganta was excited about a school trip with his classmates. They were supposed to go to the Deadman Wonderland amusement park. What made the amusement park special was that the prisoners would perform to entertain the visitors. However, a man in red appears out of nowhere and shoots all of Ganta’s friends. Only Ganta was left alive, who couldn’t move as he was freaked out.

The police immediately captured him. The innocent Ganta had to face a harsh life in the prison cell, where he had to deal with real criminals.

After a while, he gives up being submissive and takes a stand for himself. He starts to build a plan which will help him escape from the brutal place. The anime, therefore, takes a twist, and also the personality of the characters gets more stronger. Through it’s different plots, the anime has retained its fans throughout time. Following a manga, the television adaptation series has been aired in 2011. It has a total of 12 episodes, with a runtime of 24 minutes each. The anime can be found on Crunchyroll and Funimation.