Review of “Dio: Dreamers Never Die”: A Metal Gentleman Who Only Sings Like the Devil. In a new documentary, the singer who gained notoriety with Ritchie Blackmore’s Rainbow and Black Sabbath is depicted as a pleasant, if nonetheless egotistical, individual whose evil attributes mostly stemmed from his theatrical production.

The late vocalist Ronnie James Dio may still rank as the metal subculture’s most well-liked icon, making him a prime candidate for a documentary. He was virtually without controversy, which isn’t necessarily a good sign for such a treatment. The person who made the so-called “devil horns” hand motion commonplace wasn’t a demon. Even while in real life he came across as a nice upstate New York guy who had made it big with a taste for vaguely mystic imagery and a mountain-king-sized voice that could fill the largest halls, he just played one on MTV, or at least relished drawing out the gloomy imagery.

The newest in a line of well-made, somewhat unassuming rock documentaries from BMG, “Dio: Dreamers Never Die,” doesn’t portray its subject as particularly troubled or even complicated. It might be the most drug-free documentary about a legendary hard-rock figure ever produced (although a line of cocaine does make a cameo appearance in the archival footage). However, Dio’s career took just enough unexpected turns to justify the length of the biopic that was filmed about him. The movie by Don Argott and Demian Fenton is more of a fan service than a crossover picture, but it will draw people from other parts of the rock world who are intrigued and don’t mind the devil being in two hours’ worth of details.

After establishing himself in the 1970s with two other bands, Elf and Ritchie Blackmore’s Rainbow, the vocalist really shot to fame when Black Sabbath invited him to step in as Ozzy Osbourne’s replacement in 1979, ushering in a brief but pivotal period in his career. In Dio, the complete Gallant to Osbourne’s Goofus, Sabbath’s other members gained someone more stable than Ozzy, to put it in understatement-of-the-decade terms.

When all was said and done, the gentleman frontman took the position of the clown price and preferred to retire to his manor than shut the bars. If you prefer your tales of dragons and fate belted operatically from on high, rather than hissed at sulphur level, Dio was possibly the most naturally gifted singer of his chosen genre.

Dio, who passed very suddenly in 2010 from cancer that was only recently discovered, is regarded as one of rock’s friendliest icons. There is quite a lot of band turnover history to cover along the path, going all the way back to the 1950s, since despite that, he had a very robust ego.

It is revealed in “Dreamers Never Die” that before he became a deity, he was a square-jawed trumpet player and smooth vocalist in a number of post-rockabilly bands, then a bit counter-culture guy, before the pre-metal “heavy rock” of Deep Purple changed his head. Wendy Dio, his wife and manager, is introduced in the present, and she also serves as the movie’s executive producer. It’s similar to viewing early, “historical” footage of Spinal Tap navigating the 1960s as flower children to see and hear him in these early ensembles.

You’ll think of “This Is Spinal Tap” again and again. Even though Dio didn’t start regularly using a fake sword and slaying a 13-foot, laser-eyed dragon on arena stages until later in the 1980s, it’s tough to deny that his act had some impact on the writers of that comedy.

Super-fan Jack Black, who granted Dio, his ultimate hero, a fantastic musical-comedy appearance in 2006’s “Tenacious D in the Pick of Destiny,” and moreover gets all gushing here, is least likely to think any of it even a little stupid. Eddie Trunk, a hard-rock radio host who makes a telling remark about Dio’s stage show’s abundance of props late in the movie, is just one of the media voices heard in the movie who are devoted metalheads. He claims that each time Ronnie killed the dragon, he exemplified the authenticity of heavy metal.

That remark seems to be the punchline of a joke, but Trunk and the devoted filmmakers know that it isn’t. According to the documentary’s logic, which was only partially persuasive, Dio’s penchant for sword-and-sorcery was the pinnacle of some sort of credibility. In an intriguing turn earlier in the movie, Dio is remembered as standing his own in the late ’70s when then-boss Ritchie Blackmore urged, “Do you think we should write some songs about relationships?” due to his concern about Rainbow’s dwindling economic possibilities. In any other rock genre, that would be an acceptable request, but Dio left the band rather than make himself listen to something as unimportant and unmystical as a love ballad.

Dio’s flock adored him because he inspired a sense of authority rather than pure sentiment. Even though the dog-level octaves, grandiosity, and prop swords had to go, Kurt Cobain, who essentially knocked his kind of rock off the charts for good, may have had something in common with him in his capacity to make young misfits feel connected to something other than sex.

The feature-length movie and a hand-selected collection of outtakes from the cutting room floor will both be screened at this exclusive cinema event, giving attendees an experience that is only available to fans. Tickets for DIO: Dreamers Never Die go on sale at www.diodreamersneverdie.com on August 24, 2022, at 15.00 UK time. The film will be distributed by Trafalgar Releasing and BMG in theatres around the world. 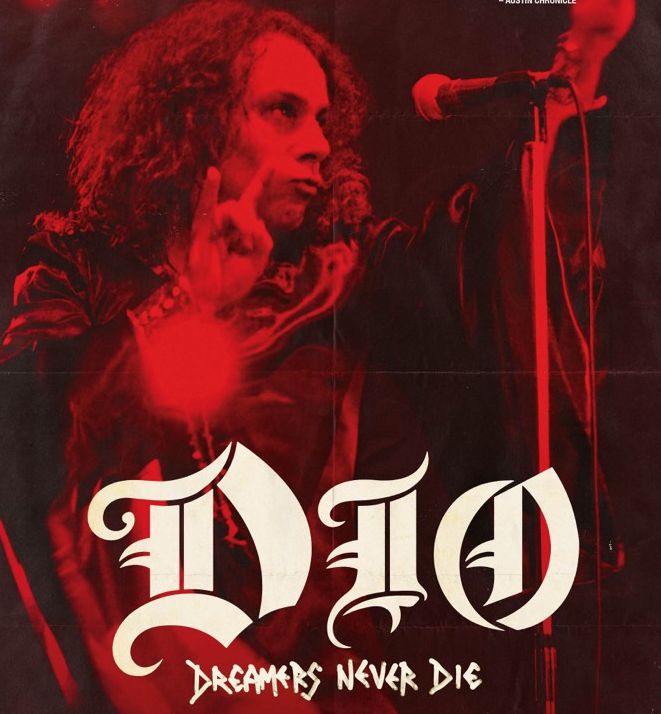 DIO: Dreamers Never Die (2022) will be premiering in theatres on September 28, 2022. We do not recommend illegal streaming and always suggest paying for the content you like to watch.

Amazon prime will not be streaming DIO: Dreamers Never Die (2022). Additionally, several other films are streaming on Prime. Our recommendations are The Voyagers, It’s a Wonderful Life, Notting Hill, and Eternal Sunshine of the Spotless Mind.

HBO Max will not be streaming DIO: Dreamers Never Die (2022). However, HBO’s subscribers can enjoy its other popular streams like Euphoria, When Harry Met Sally and Promising Young Woman.

DIO: Dreamers Never Die (2022) is not available on Hulu. The new release line-up additionally includes Pam and Tommy, How I Met Your Father, Abbott Elementary, and Vikings.

DIO: Dreamers Never Die (2022) will not be available to stream on Netflix. However, other brilliant shows like The Power of The Dog, The Social Network, Tick, Tick, Boom, and much more are available.