This Is How Benedict Cumberbatch Got Muscular For Doctor Strange 2, His Insane Disney Routine Explored

Extreme levels of commitment that lead actors to work on their bodies for particular roles are nothing new in Hollywood. Christian Bale, for example, put on a few pounds for the film American Hustle just as effortlessly as he seemed super-skinny for The Machinist. He went all ripped to portray Batman or his role in American Psycho when the role demanded it. Benedict Cumberbatch is another perfectionist, so we weren’t shocked to learn about his extra efforts to play Doctor Strange in the upcoming Marvel film.

He previously dazzled reviewers and audiences by dropping 21 pounds for the film The Courier. While it made him feel vulnerable and weak, it also helped him psychologically prepare for the demanding job. He is clearly not the kind to avoid working out and submitting to harsh diets in order to fulfill the demands of specific jobs. We’ll walk you through his extraordinary fitness journey and how he got the sculpted, flawless figure you see in Doctor Strange: In the Multiverse of Madness in this video.

The buzz was created with a leaked photo 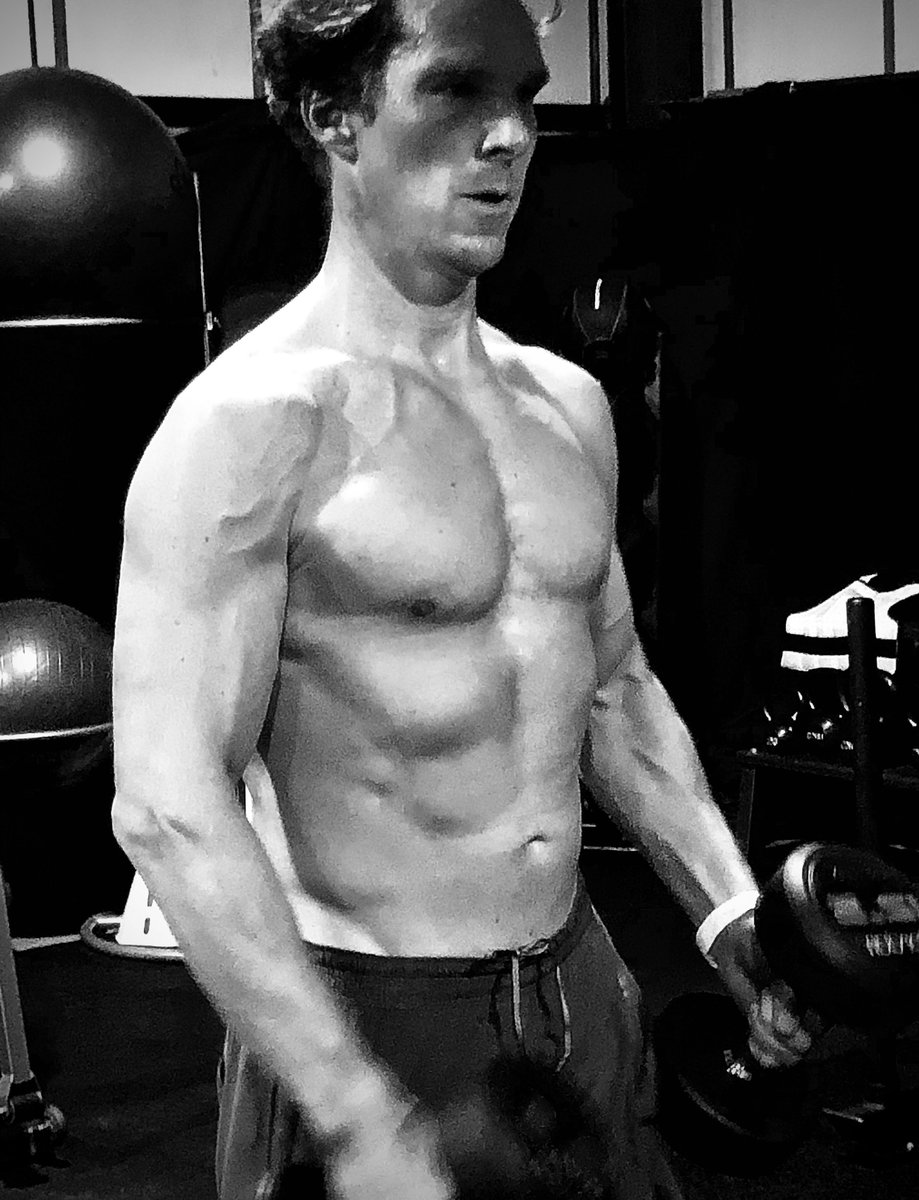 It all started with a leaked photo when a user on Weibo revealed one of the photos of Benedict Cumberbatch training for the movie. The image took the fans by surprise because the actor is not really known for being a fitness freak. The rippling muscles and toned body, however, speak otherwise, and there were images circulated, where the actor could be seen lifting heavy weights for the role.

One of the first questions that came to mind was why would he burden himself with such extreme efforts when Doctor Strange is usually covered in a loose, long robe! The perfect physical shape is not exactly visible under the flowing robes, and people started wondering about some other appearance of Doctor Strange in the movie.

It could also be the case that the actor felt the need for a perfect fitness regime because of the demanding stunts that need to be performed. Or… it could be a buffed-up variant of Doctor Strange lurking around the dark corners of the multiverse! Whatever be the case, the fans and critics were impressed by the dedication of the actor in his mid-40s.

We have already witnessed his brilliant acting prowess on multiple occasions – this time around we get to see the tough routine that he went through to give young actors a run for their money in terms of fitness! He even revealed in an interview that he actually enjoys the process of body transformations for a particular role.

The Journey Began with a Vision! 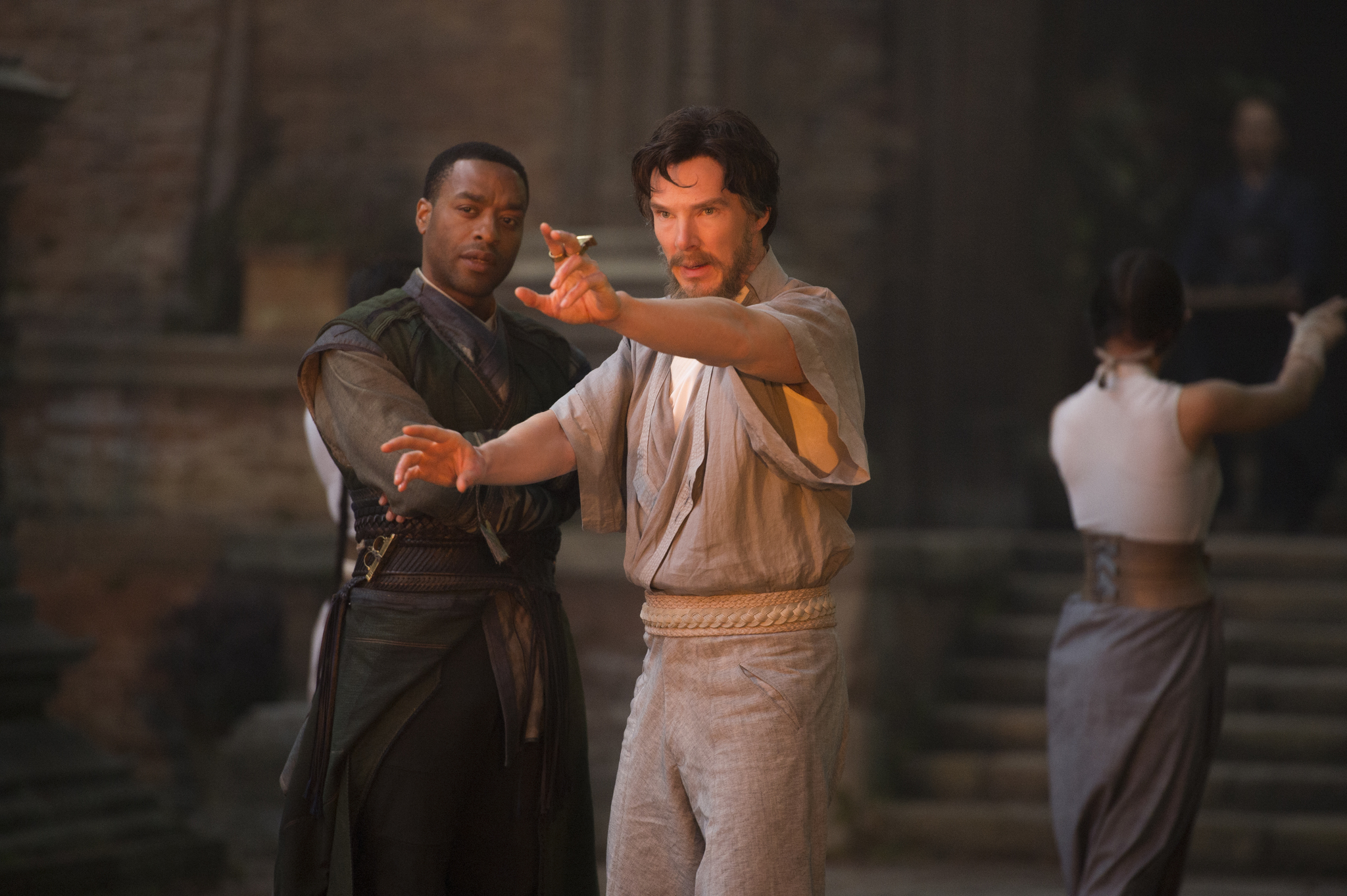 When Benedict Cumberbatch was the first cast as Stephen Strange in the Marvel cinematic universe, the physical demands of the role were not extreme. Yes, he did have to undergo a certain diet and minimal exercises to remain fit for the stunts, but it wasn’t like he had to look ripped and jacked. But this time around, he has clearly taken things to the next level. He personally stated that he went through rigorous training to achieve the perfect muscular body, but no pain no gain! There are no shortcuts really if an actor wants to look good on screen without affecting his health. Yes, you guessed it right! He went through a regular routine of weight training, where he lifted serious weights for at least three to four days a week.

The kind of gains that he has achieved wouldn’t have been possible without such regular weight training. He did everything from dumbbell chest presses, bench presses, shoulder front raises, and bicep curls. It is not like he was a stranger to such forms of weight training as a professional actor, but he certainly hit the weights harder this time to get so jacked and pumped! 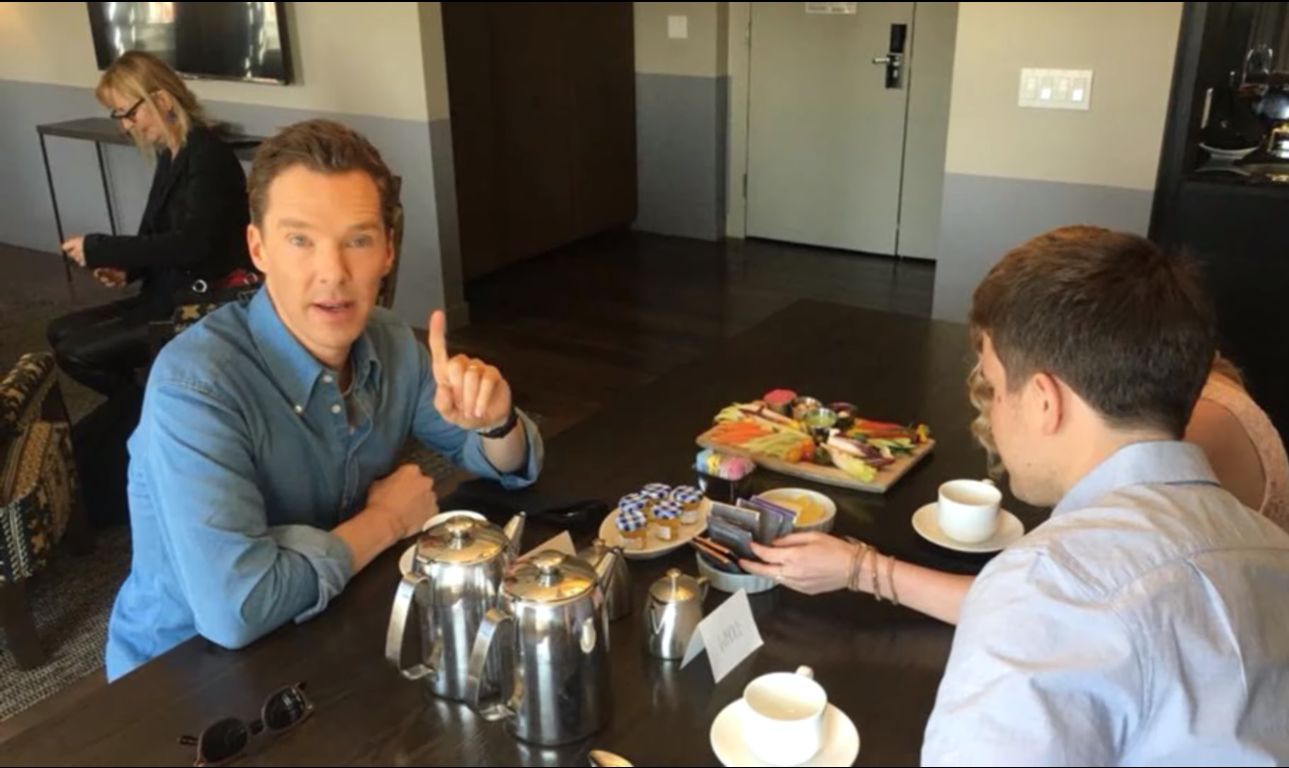 There is a very popular saying among fitness freaks: Abs are made in the kitchen, but they start showing in the gym. It is very evident that one cannot outrun the ill effects of a poor diet, and Benedict Cumberbatch did not want to cut corners in the process.

Even before the 2016 film, he was on a very strict diet for a few months before the filming began. He is a vegan, and his diet doesn’t really have anything unusual. The trick is to strike the right balance, where he eats moderate quantities, and the plant-based diet helps him burn fat quickly.

It also ensures that he stays healthy during the process because fitness is not just about looking good, but feeling good as well! If you think a plant-based diet wouldn’t be enough to maintain serious muscles, think again! The likes of Chris Hemsworth turned to a plant-based diet while training for his role in the MCU, and you certainly remember his muscular physique in the 2012 Avengers film. He did switch back to his regular omnivorous diet, but Benedict Cumberbatch has continued eating plant-based food ever since. It was not very different while he prepared for Doctor Strange: In the Multiverse of Madness, and the plant-based route clearly yielded some exceptional results!

Benedict Cumberbatch is someone who is known to eat healthy throughout the year, but the role demanded something special. He had to increase his calorie intake for the kind of exercise regime that he followed, and he still had to maintain his plant-based diet. His diet would comprise bananas, nuts, vegetables, and hummus, and he was particular about the special lunch box that was brought in every day for him.

He had to resort to the extra calorie of the protein shakes to keep the body functional under such a rigorous workout. It is believed that he almost doubled his calorie intake during the training phase, consuming around 4000-4500 calories every day. It also took a few sacrifices along the way, and the actor had to completely stay away from alcohol. It probably wasn’t very difficult for Benedict because he was never really a heavy drinker, but ditching booze completely certainly had a positive impact on his body.

The night before the shirt-off moment, the actor kept himself dehydrated – a common practice to make the cuts more prominent. It is probably the only unhealthy thing that he did during the process, where he drank coffee for the night, and consumed Skittles, all to get super-dehydrated for the shoot the next day. The muscles look extremely toned, and the results are evident!

Balancing it out with some Yoga 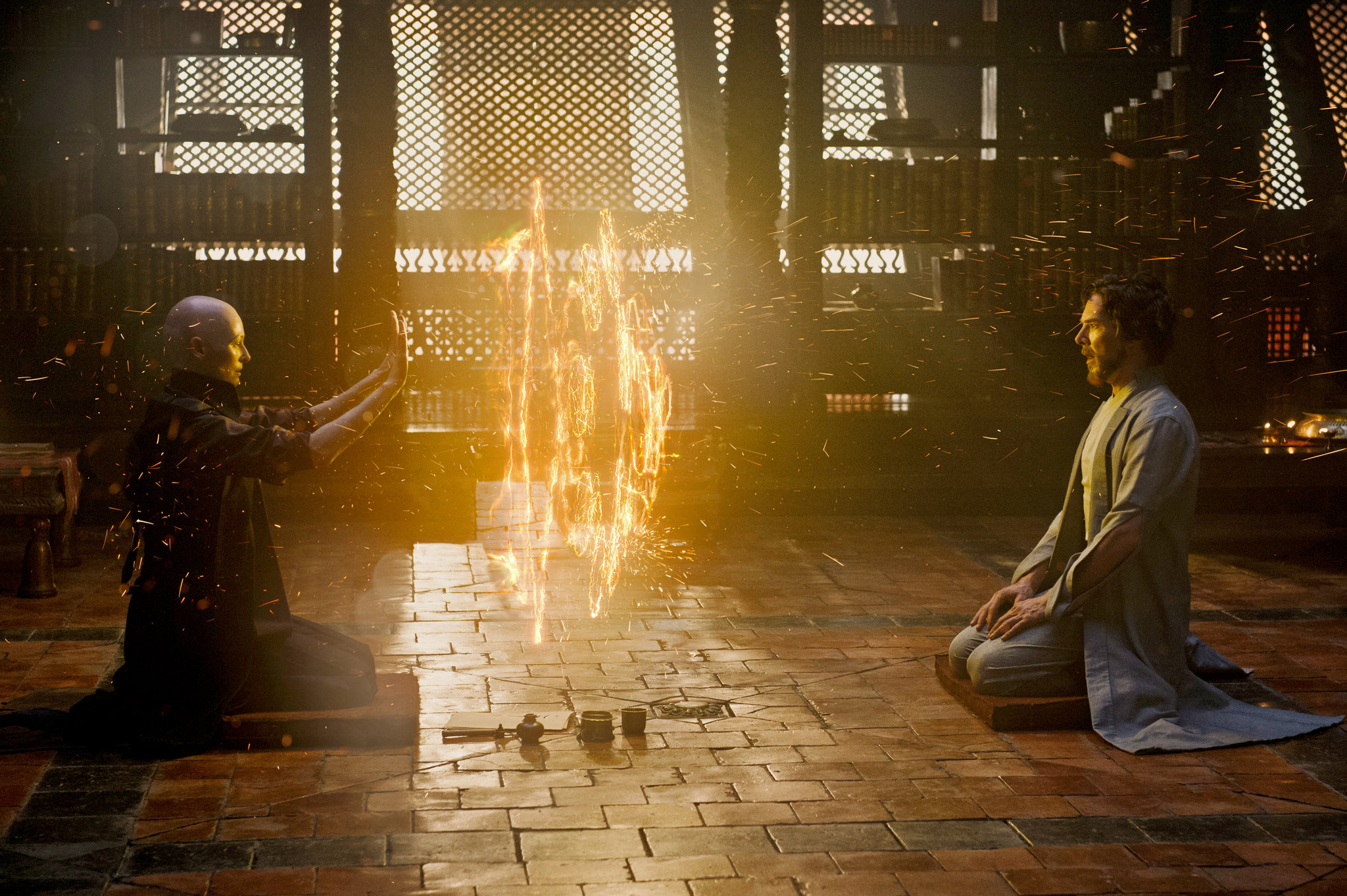 Fitness routines often go for a toss because people cannot seem to balance it out properly between lifting weights and other stuff. Of course, you wouldn’t expect that from a thorough professional like Doctor Strange, who left no stone unturned to get the superhero-like body type! While he did not compromise on lifting heavy weights, he made sure that it wasn’t the only form of physical training that he underwent.

He is known to be a Yoga enthusiast, and time and again he has revealed his love for this form of exercise. When he was young, he had gone to teach English in a Tibetan Buddhist monastery, and this is where he picked up on the habit. For this role, and for taking up the perfect body goal, he focused on Yoga, to balance out the power of the body and the power of his incredible mind.

The experienced trainers will tell you that Yoga also strengthens the core and this means, that the stunts must have been a lot easier for the actor to perform. For his role as Doctor Strange, he has to spend a significant amount of time flung from cables, and being on the wire certainly got easier with his all-around efforts.

The actor himself enjoys the physically demanding aspect of the role, and he has gone on record to say that it doesn’t quite feel like a superhero role unless there is some physical trauma. From the looks of the new movie, Doctor Strange seems to have his hands full with some complicated problems, and his core strength will surely come in handy to save the day!

He topped it off with some strength training and cardio You can be jacked as a bodybuilder with all the extensive weight training, but the perfect cuts in the muscles wouldn’t come without the right blend of cardio. Yes, most people who are into weight training aren’t exactly cardio fans, but they all acknowledge the importance of some good old cardio training.

Benedict Cumberbatch ensured that his workout routine included running, and his regular sprints helped burn the calories fast and well. He conducted a unique sprint exercise for 20 minutes, where he would walk for two minutes and then sprint for one. After around ten minutes, he reduced the walking time to one minute and ran the other minute for the remaining session.

This was accompanied by strength training, which involved certain weight-bearing exercises using free weights or simply the body’s resistance. It is clear that the actor worked out three to five times every week to get to this end result, and he certainly separated his workload to focus on strength training on certain days. Besides all these efforts, he still had to master the art of fighting to make the fight scenes look so lively.

He practiced martial arts and other forms of combat to move like a true superhero, and the results are there for all to see. The actor said that one has to be incredibly fit to take the hits and perform all the fight scenes for days during filming.

The right pace of training 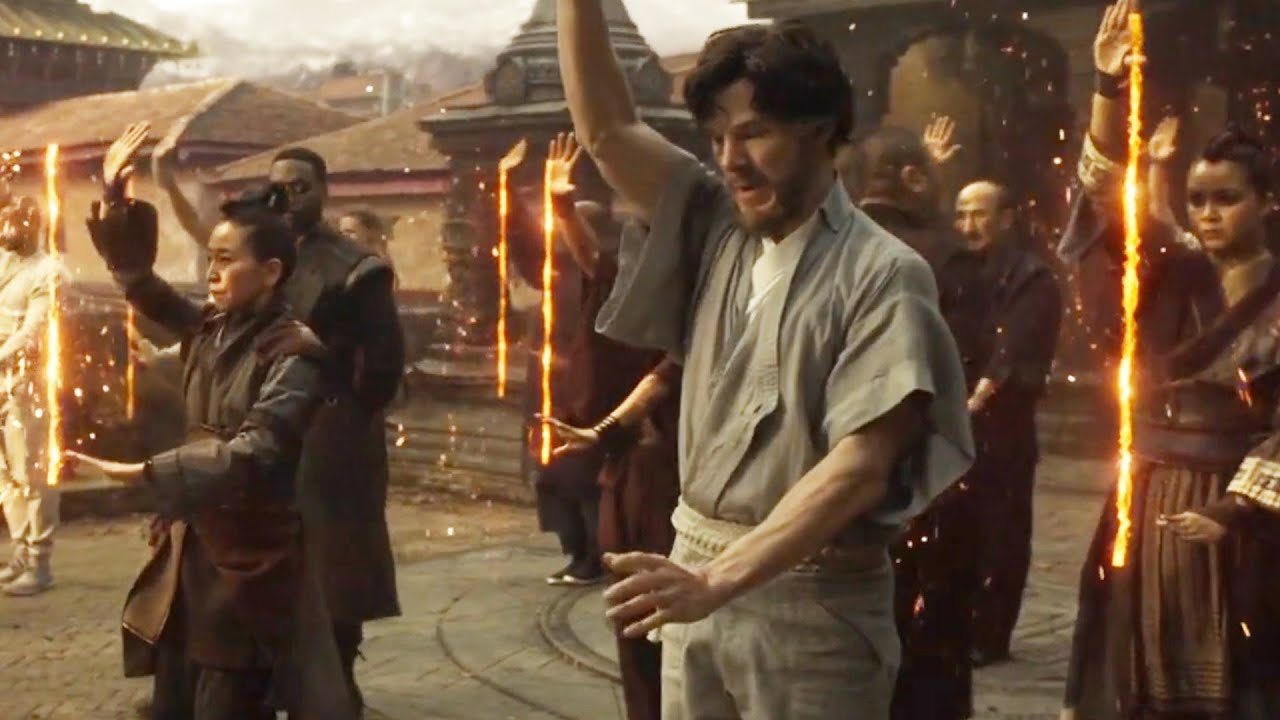 There is no shortcut to achieving the perfect body and this is something that all trainers will tell you. Even an actor of the stature of Benedict Cumberbatch did not hurry his way to get to his goals, and he enjoyed the process, allowing it adequate time to flourish. The transformation was not meant to happen overnight and it didn’t! It is simply a combination of healthy food habits, regularity, discipline, and a lot of enthusiasm. If his role in The Courier required a drastic weight drop, this time it required him to be at the epitome of fitness, and like a true professional he was up for the challenge.

He had the right support 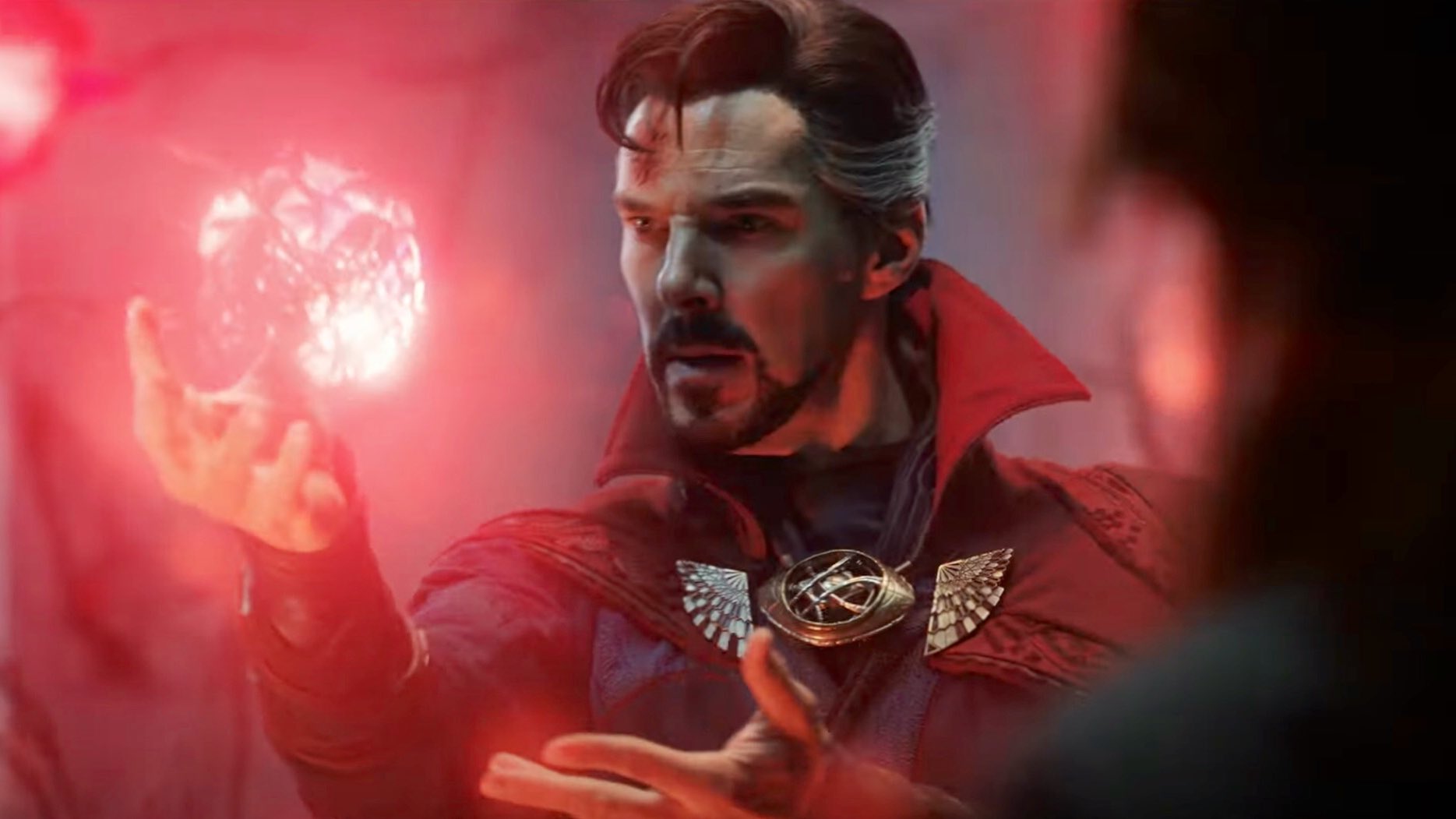 You bet he did! He is Benedict Cumberbatch for God’s sake! Joke’s apart, the actor was helped by a team of professionals who understand the art of developing a body the right way. The physical changes were being monitored and so were his diet, calorie intake, and regular exercises. He had a personal trainer all along, and even his stunt double and some cast members helped him on the way. Long story short, the actor did not have to worry about calculating every calorie that he consumed because there were people to do so. After all, his real art is acting, and he had to focus on that as well! We often see the glamour on-screen and ignore the unbelievable hard work that goes behind the process. An actor of the pedigree of Benedict Cumberbatch would go to any stretch to perfect their art, and this time it required him to be a perfect physical specimen.

Clearly, he was up to the task, and the new movie has enough glimpses of the fitness levels and perfect body that he achieved. Go ahead and check him out in the theaters, and the Sam Raimi comeback promises to be another showstopper in the MCU. Cumberbatch is bulked up more than ever, but you will know that it has all been worth his efforts!