“Idle hands make for the devil’s playthings,” as we have heard our parents say since we were children, is clearly the inspiration for the film’s title. The picture garnered a lot of poor feedback and only made roughly $4 million, far less than its $25 million budget. However, I believe it is past time for the critics to reassess their position on this film. 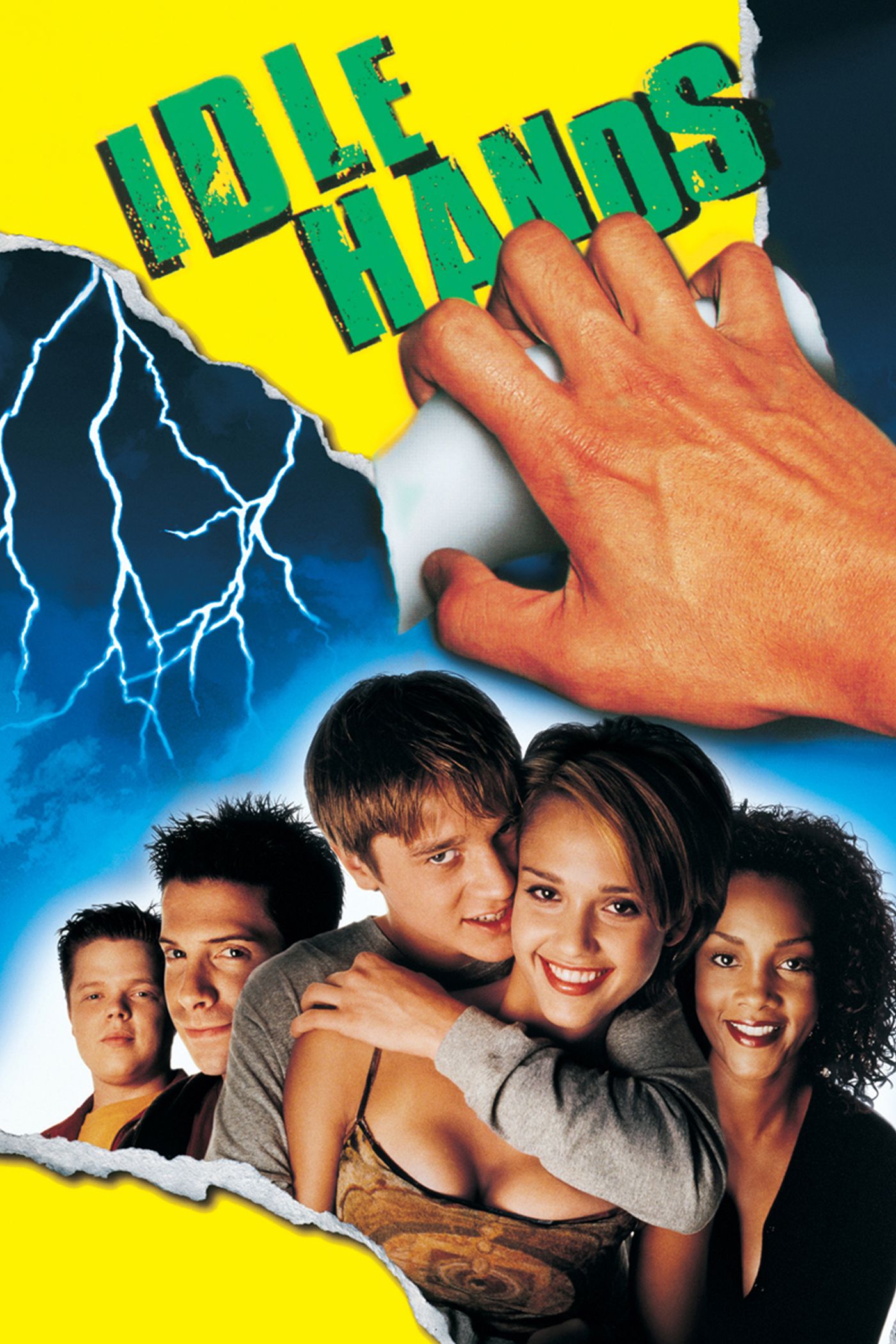 When Mr. and Mrs. Tobias get into bed, they notice a message on the ceiling saying “I’m under the bed” and hear a disturbance outside. So, obviously, the man of the house, Mr. Tobias, investigates the sounds, while Mrs. Tobias dials 911, only to be pulled beneath the bed and killed.

Anton wakes up on Halloween morning and goes through the contents of the fridge and TV, oblivious to the pool of blood on the floor. Later, he finds that his lovable Dad (Fred Willard) and Mom (Connie Ray) have been turned into headless Halloween decorations. Their stoner son, who has been oblivious to their disappearance and death for the past seven days, runs out of pot one morning.

Anton takes some pocket money and goes to meet his similarly irresponsible stoner friends, Mick and Pnub. He goes to Pnub’s place to acquire some stuff, but he is also out. He catches sight of Molly, the girl next door who has been his little crush forever. Anton’s friends urge him to chat with her. So, he goes to return Molly’s lyrics book after seeing her drop it, but he ends up being really awkward, just like a regular teenage boy.

After hanging out with his friends, Anton returns home and tries to make his own joint using oregano and nutmeg. He then proceeds to pour dish soap into his mouth to cleanse himself of the aftertaste. Funnily enough, he uses real dish soap, and Sawa came up with the gap on the spot while filming. He then makes a sandwich for himself when he sees blood on the knife he’s using, and his cat, Bones, is playing with an eyeball.

Like any normal human being, no matter how blazed, he panics and trips while running downstairs only to find his parents’ bodies dressed as Halloween decorations. Mick and Pnub show up at that time, and he shows them the bodies. People who did not notice dead bodies on the ground, somehow manage to realize that Anton is the killer.

Mick tries to dial 911, but Anton pulls out the phone cord and swears he isn’t the murderer until his hand murders Mick with a glass bottle. You can’t really argue with hard evidence, like a dead friend with a bottle sticking out of his head, but Anton sure tries anyway. He tries to assure Pnub that he didn’t do it on purpose. Just then, they discover Anton’s hand is possessed. Pnub is then chased into the basement by Anton’s hand, which he tries to stop so Pnub may escape, but his hand overpowers him and decapitates Pnub.

Anton’s hand seems to have a mind of its own and a vendetta against cats since it throws Bones, his cat, out of the window. He attempts to find Bones, but the hand pulls him onto Molly’s doorstep and rings her doorbell instead. The hand may be murderous, but it sure is a wingman. Molly invites Anton into her room to have sex when Anton’s murderous hand decides to choke her. She seems oblivious to the murderous intentions and thinks he is just kinky. Thankfully, her parents come back, so he leaves.

Anton buries the bodies of his friends and parents in his backyard with a lovely eulogy asking for their forgiveness. Just then, Mick and Pnub return as zombies and knock him unconscious. They were just too lazy to take the long walk to heaven. They rejected heaven just to hang out on Anton’s couch and throw cheese puffs at Pnub’s decapitated head. He seeks help from his friend, Randy, who listens to Satanic music.

He tells him to keep his hands occupied, so we see Anton pick up knitting. It seems to be going well until two police officers try to catch him independently. They were obviously not successful. One ended up with a. knitting needle through his brain while the other got tasered to death. Anton decides that the solution to his murderous hand is to cut it off. He cuts off his hand, and Mick cauterizes it with iron only to see ‘bad move Anton’ written on the floor. Anton traps the hand in a microwave and burns it, while Pnub and Mick go for a First-Aid Kit.

Anton goes home after sending Molly to the school dance to finish the hand. Unfortunately, Pnub and Mick release the hand by accident. Debi LeCure, a druidic high priestess, is on the hunt for the spirit responsible for the killings across the country. Debi ends up meeting Randy at the bowling alley, and they go on a quest to stop the possessed hand. After stealing Randy’s truck, the three proceed to the school.

While Anton searches for the hand, Mick and Pnub attend the Halloween dance to keep an eye on Molly. Randy and Debi meet Anton for the first time at the school while Anton tries to find the hand. Debi tries to stab him with a cool-looking knife when he shows her his stub of a hand. If the evil is after Molly, then her soul will be dragged to hell at midnight, Debi explains. Anton interrupts the dance and warns everyone about his hand, but he gets booed in response.

After having sharpened its nails with a pencil sharpener, the hand rips the scalp of the lead vocalist of the band, causing panic at the dance. Molly and her buddy Tanya use the vents to flee. They try to pass through a fan that they have stopped using Tanya’s shoe. Tanya, unfortunately, becomes entangled in the rope.

While Molly tries to pull Tanya off the fan, Anton’s hand removes Tanya’s shoe, leading to her death by the fan. Anton comes into the art room and battles with the hand while it is inside a puppet, but it escapes to the auto shop, where Molly is strapped to a car and is being hoisted towards the ceiling to be crushed to her death.

Anton, Mick, and Pnub are fighting for possession of the controls. Mick and Pnub decide to smoke “for strength” from a mechanic’s bong. This is when Anton gets a great idea and blows smoke into the hand until it drops the controls. Turns out that severed hands that don’t have mouths can also get high.

With this, they are able to save Molly. Just then, Debi slams a ritual knife into the hand, which comes to a halt in a cloud of smoke and flames. Anton frees Molly from the automobile’s roof, and the two, very smartly, stand underneath it to make out. Pnub unintentionally hits the automobile controls while lighting the bong for Mick, and Anton is crushed by the vehicle.

Anton is in a body-cast at the hospital at the movie’s end, having given up heaven to be with Molly, and Mick and Pnub are now his Guardian Angels. When he is alone in his room, he looks up at the ceiling and notices the message “I am under the bed” scribbled on the ceiling. Mick and Pnub stroll down the corridor, debating whether or not to tell Anton they wrote the note but ultimately decide against it, chuckling.

Is There Going To Be An Idle Hands Sequel? 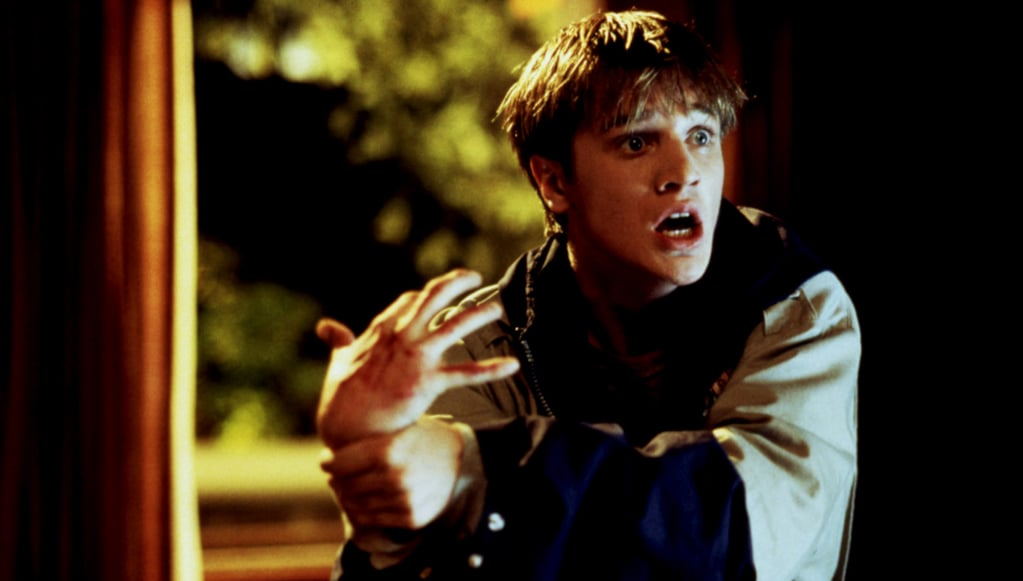 Although Hughes and Milbauer, the writers of Idle Hand, are unlikely to be working on a sequel to Idle Hands, Sawa told ComicBook that he would gladly return for a reboot or sequel. He said his time on set was like being at a summer camp, which we can only assume is a good thing since he said that Idle Hands is at the top of his list of sequels he’d like to work on.

Despite the minuscule chance of a sequel, he has expressed interest in a remake with a new cast and a modern setting. Sawa showed interest in a sequel to Idle Hands even in 2019, but he highlighted the original film’s box office troubles as a reason why a reboot would probably never happen. It would be a risk for Hollywood, but it isn’t always reluctant to take risks. Even though certain installments of the Scream, Transformers, and Fantastic Four series performed poorly at the box office, they nevertheless received many sequels. So there’s still hope for Idle Hands aficionados.

I certainly hope to see the film return in a sequel because it did not receive the love it deserved. The characters are fun-loving that remind you of all the good memories of high school. The dynamic between the friends, especially Mick and Pnub, is super fun to watch. We can only hope that Hollywood realizes what an underappreciated gem this movie is and gives it the sequel it deserves.