One of the shows from the Adult Swim schedule is Korgoth of Barbaria, which debuted in 2006. Another programme is The Venture Bros. It is strikingly similar to the Conan the Barbarian movies.

It was made by Aaron Springer, a storyboard artist and the mind behind popular television programmes including SpongeBob SquarePants, Samurai Jack, and Dexter’s Laboratory. It lives up to the previous series’ hype. Due to the expensive production costs, the series did not continue after the pilot episode.

There was also a petition to bring the programme back, although throughout the years Adult Swim only broadcast the pilot a handful of times. On the Adult Swim website, the only reference to the programme is a graphic in the intro that reads, “you could not handle more than one anyhow,” which is utterly the most Adult Swim thing ever. With that backdrop established, let us move on to the pilot episode of what, if it had not been cancelled, had the potential to be a terrific television programme. 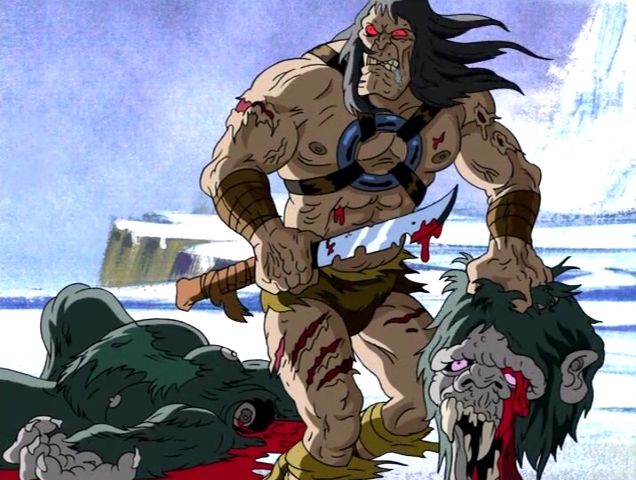 Korgoth of Barbaria is a show for teens, by teens, and about teens as per the slogan, and it delivers on it. The plot takes place many years after the end of the world, in a land where magic, demons, mutants, and extinct creatures coexist with the shattered remains of technology and a scant amount of civilization. It is set in a grim futuristic wasteland, where many a city has risen and fallen, primal monsters have reclaimed the forest, and scant, thieves and savages inhabit filthy villages. It is a show full of black comedy that plays jump rope with the line, crossing and uncrossing it constantly.

When they learn that Korgoth would be stopping at a specific bar while passing through town, a bunch of hoodlums start seeking him. Although there are hints that he is more intelligent than he appears to be, at least occasionally, Korgoth appears to be the stereotypical dim, brutish, and violent man who seems to be all muscle from the frozen areas of the north, and his direct, ruthless fighting style and wide-ranging world experience make him the ideal survivor in this wasteland of a world.

The group of men makes an effort to contact him, but due to misunderstandings and the fact that the group’s leader is a colossal jerk, Korgoth kills the majority of them before they can persuade him to hear their master’s offer of employment. It is a really funny scene if you are one to laugh at scenes of gore. At one point, Korgoth rips the skin off a man’s body, pours alcohol on his exposed muscles, and then proceeds to light him on fire.

Eventually, he tortures the group leader and makes him spill who their master is. The leader turns out to be the criminal mastermind Gogmagog, with whom Korgoth had a falling-out after a previous relationship went sour. Gogmagog is a slimy-looking character with green skin and a nasty demeanour. It seems clear why Korgoth had a falling out with him.

Now, the reason Gogmagog sought Korgoth’s assistance was that he wanted the Golden Goblin. A magician has long held this mysterious ancient figure by the name of Specules. Korgoth, however, doesn’t want to participate. So, Gogmagog feeds him food. A lot of meat, all in an effort to convince him. But Korgoth doesn’t mess with wizards. That is one rule that he has. Gogmagog is hell-bent on recruiting Korgoth, though.

He has assumed that Specules has suddenly died and left his tower undefended, making the Goblin ripe for the taking, as long as Gogmagog can seize it before any other interested parties can. He has assumed this because the Spicules has not been doing his regular ritual of standing in front of the cave with his hands raised for 45 minutes or till his hands get tired. With this information that Gogmagog has gathered using a magic ball strategically placed in front of the castle as an incentive, he tries to recruit Korgoth again, without avail.

Then Gogmagog pulls a sneaky Goblin move and confesses that Korgoth’s portion of the food they had just eaten contains a deadly parasite and that only Gogmagog can provide the antidote for. Korgoth, who doesn’t trust Gogmagog and generally avoids tampering with wizards, is going to reject and depart. But the parasite acts up, making him realize that he indeed has been injected with it.

Now that he is forced to travel the long, perilous distance to the tower of Specules, Korgoth will encounter a variety of bizarre and deadly hazards in addition to the tower itself. Korgoth then travels to Specules’ castle with a troop of Gog-Ma-goons. They travel through a really dirty river which is full of blood-sucking leeches. Korgoth just rips the multiple leeches off of him without caring that they took a chunk of his skin with them. When the leader of the goons tries the same, he can be seen screaming in pain from just one leech bite. He is the definition of all bark and no bite.

During the travel, the leader of the goons sees a female tied to a tree. He goes up to the tree to unchain her and, well, hopes to do other things than just free her when the tree just flips and becomes a man-eating tree. The tree goes on to eat one of the members of the troop and is about to eat the leader of the goons when Korgoth steps in and kills the tree. Once the lady has been saved, the group makes a bonfire from the tree they just killed. Obviously, like any hero, ours also needs a girlfriend at this point. So, the damsel no longer in distress becomes Korgoth’s lover, and they all proceed to the castle.

When the party arrives at the castle, they start to throw things around and look for the Goblin. Meanwhile, Specules returns and explains that he was on vacation as Korgoth looks for the Golden Goblin upstairs. All the goons are killed or rendered helpless by Specules’ magic, with the exception of Korgoth, who is not present with the rest of the crew. Specules goes up the stairs and finds Korgoth with the Golden Goblin in his hand.

He decides to attack Korgoth, but Korgoth proves to be too powerful for the absurd monsters the wizard summons with chewing gum. Korgoth is seen cutting down a bull made by the chewing gum, which then turns into a lady with six breasts, who proceeds to make out with Korgoth and push her tongue through his eyeballs. However, none of this works, and he emerges victorious.

As a final option, Specules employs magic to attack Korgoth directly; unfortunately, this throws him off-balance and causes him to kill Korgoth’s girlfriend instead, although unintentionally. This causes Korgoth to impale Specules through the eyes with a two-pronged candlestick holder out of rage. 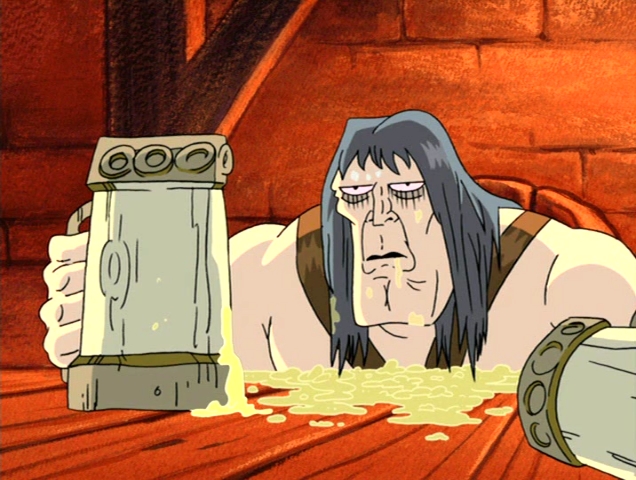 Once the wizard dies, he turns the body of his lover and discovers that the wizard’s head has been magically transferred to the corpse of the murdered girl. Specules then proceeds to launch himself out of the window. It is a rather disturbing visual to see a droopy-faced old man’s head on the body of a beautiful woman. It is these visuals and obviously the in-your-face comedy that makes it such a great show.

After defeating Specules, Korgoth returns to Gogmagog with the Golden Goblin, who gives Korgoth the elixir in return. Unsurprisingly, the elixir doesn’t take effect immediately. As it turns out, the potion takes many seasons to take effect and kill the parasite. Obviously, a duped Korgoth was last spotted leaving while pushing a cart loaded with prescription bottles.

We can only hope our great hero gets rid of his stomach bug soon enough and returns to us, because, my oh my, what an episode! Even though it was just a pilot, Korgoth has wiggled his way into my heart as one of the best shows ever. In the 22 minutes of the show, there has been so much gore, action, and drama that there is no way one can’t love the show.

It has everything it takes to make a great one, well, except the budget. Maybe we can start a GoFundMe for them just to bring it back. Yes, that is how much I enjoyed the show and so will you, once you watch it. If you have seen the show, let us know what you think of it in the comments below!