Mundaun is a secret gem that has gone undiscovered by the gaming community since its release back in 2021. It is set in the quiet foggy hillside of a secluded town studded with hamlets, which has a history of strange activity. In this article, we will discuss what makes Mundaun different from other recent releases, as well as its advantages and disadvantages, and why we think it is certainly worth playing.

With six years of hard labor, Michel Ziegler was able to construct a world that is both unsettling and alluring, giving lovers of the horror game genre a compelling visual masterpiece. “Mundaun,” published by MWM Interactive, is an experience you will not want to miss if you enjoy open-ended survival horror games with everything from a compelling plot to terrifying horror sequences to mind-bending puzzles. If this describes you, you may also enjoy games like Outlast, Black Mirror, and Amnesia. Let us jump right into the compelling narrative that gives this game its incredible brilliance. 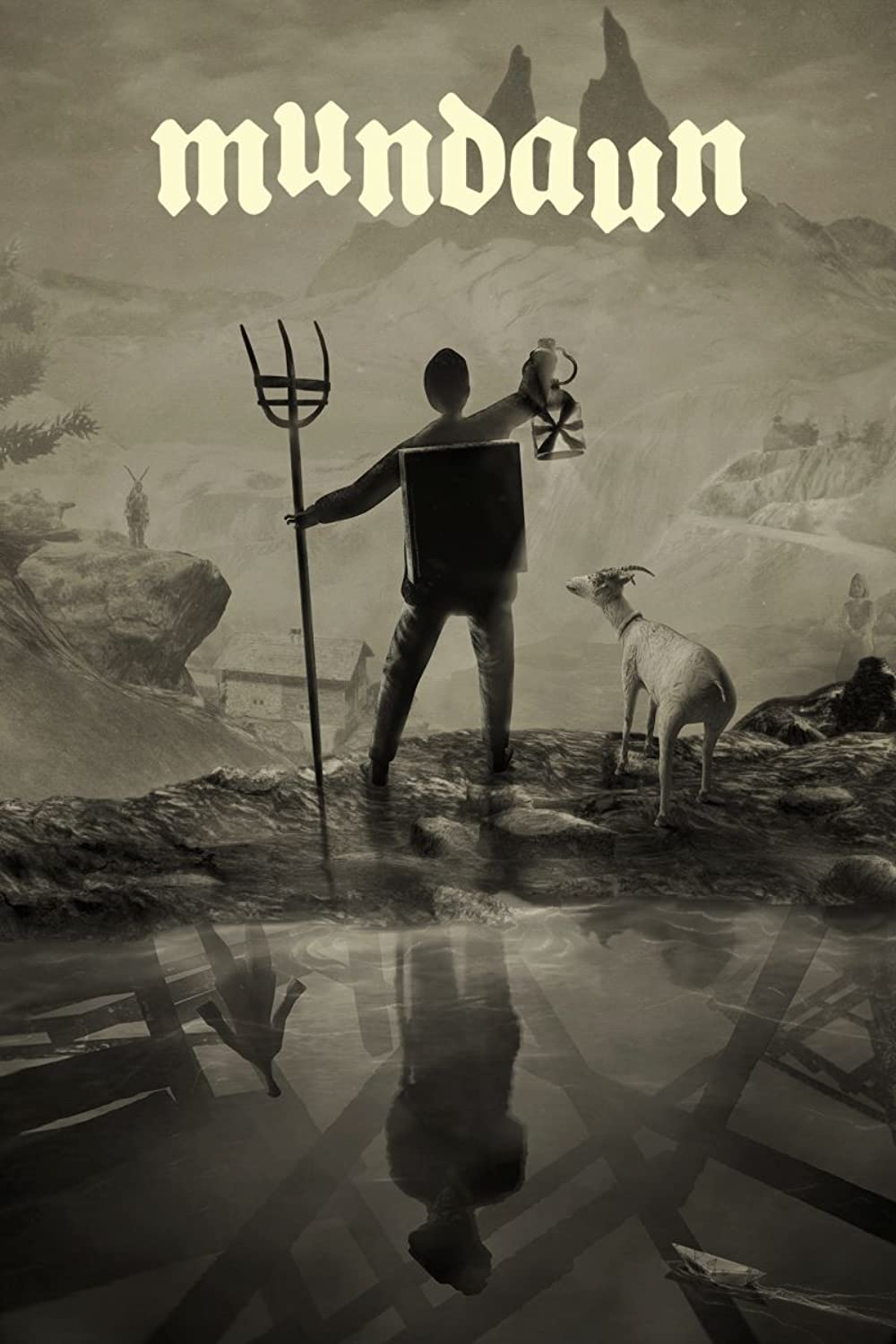 The story starts off as the protagonist of the story ‘Curdin’ receives a letter from a priest bearing the news that his grandfather has passed away. Regardless of how the letter states that he need not come down to the town where his grandfather took his last breath, an uneasy premonition urges him to set off on a journey to attend the funeral.

What follows next is a spine-chilling adventure as our hero explores the incidents that led to his grandfather’s death, revealing that the story has more to it than meets the eye. Upon finding that his grandfather’s grave is empty, Curdin starts to investigate and as the game progresses, he understands that the barn fire that supposedly killed his grandfather is linked to demonic origins.

He explores the village of Mundaun as a plethora of mysterious supernatural activities start to unfold. Curdin soon realizes that something ancient and sinister is haunting the inhabitants of the village. Like any good open ended survival horror, Mundaun paints a vivid picture of the swiss alps haunted by the daunting thought of paranoia as the protagonist makes his way to the top of a hill using a variety of transport including sleighs, trucks and even hay loaders. The character spins in and out of phases of hallucinations which present the opportunity to explore various haunted elements and apocalyptic landscapes.

The ghastly demons and sinister ghouls of Mundaun are inspired from myth and folklore. The entire artistic design of the game is hand drawn pencil sketches, giving the game a monotone aesthetic. Coupled with excellent sound design, well placed static radio noises and a beautiful insight into rural Swiss culture, Mundaun promises a holistic horror experience for the gaming community.

The gameplay is basic point and click with a variety of interactable objects and a simplistic inventory, the bare essentials. The weapons at your disposal are limited to breakable pitchforks and an heirloom rifle. Every shot a player fires is a loud deafening crack that breaks the serene peace of the mountains, echoing and disrupting its quiet solitude. Although Mundaun was not released by one of the giants in the industry, MWM Interactive did a fine job in distributing a hidden gem amongst the various other titles in 2021.

With its 7-10 hours of runtime, distinct character animation, grotesque hand painted mountain ranges and spine chilling horror narrative, Michel Ziegler’s brainchild certainly manages to leave a mark. Now, let us take a look at the various aspects of the game where it stands out from the rest and also certain aspects where it does not quite deliver – the pros and the cons, of this one of a kind psychological horror experience. The Pros and The Cons Mundaun redefines game artwork in every sense of the word.

With an intense storyline which explores elements of folklore and horror, Mundaun is a visual masterpiece. Every frame is pencil drawn and then wrapped around digital elevation models. Thus achieving a sketchy yet appealing visual. According to Ziegler, the sketch book aesthetic was specifically chosen as it made everyday objects seem like “dark oppressive things”. Another talking point is the excellent sound design. Sound designing is perhaps one of the most crucial aspects of the horror genre in every visual media.

Being a solo project until the later stages of its development, Mundaun surprisingly does not fail to deliver where it is really expected to. Composed by Michel Barengo, the well balanced audio adds to the lingering feeling of doom at every nook and cranny throughout the game. Inspired by works such as The Black Spider and The Shining, Mundaun was modelled after real life locations around the Swiss alps. Mundaun also manages to excel at using what game developers often refer to as ‘negative possibility space’.

Meaning that the gamer may choose to explore and interact with many objects that enrich the gaming experience but adds no real progress to the main objectives. Call these, the ‘easter eggs’ within a game that helps to grow your inventory and often gives access to fun side missions, doubling as tutorials for later stages of the game. One such example would be the sleigh ride along the snowy landscape which trains the player for a boss fight where they have to escape from the clutches of a demonic entity, fleeing on a sleigh amidst a blizzard! 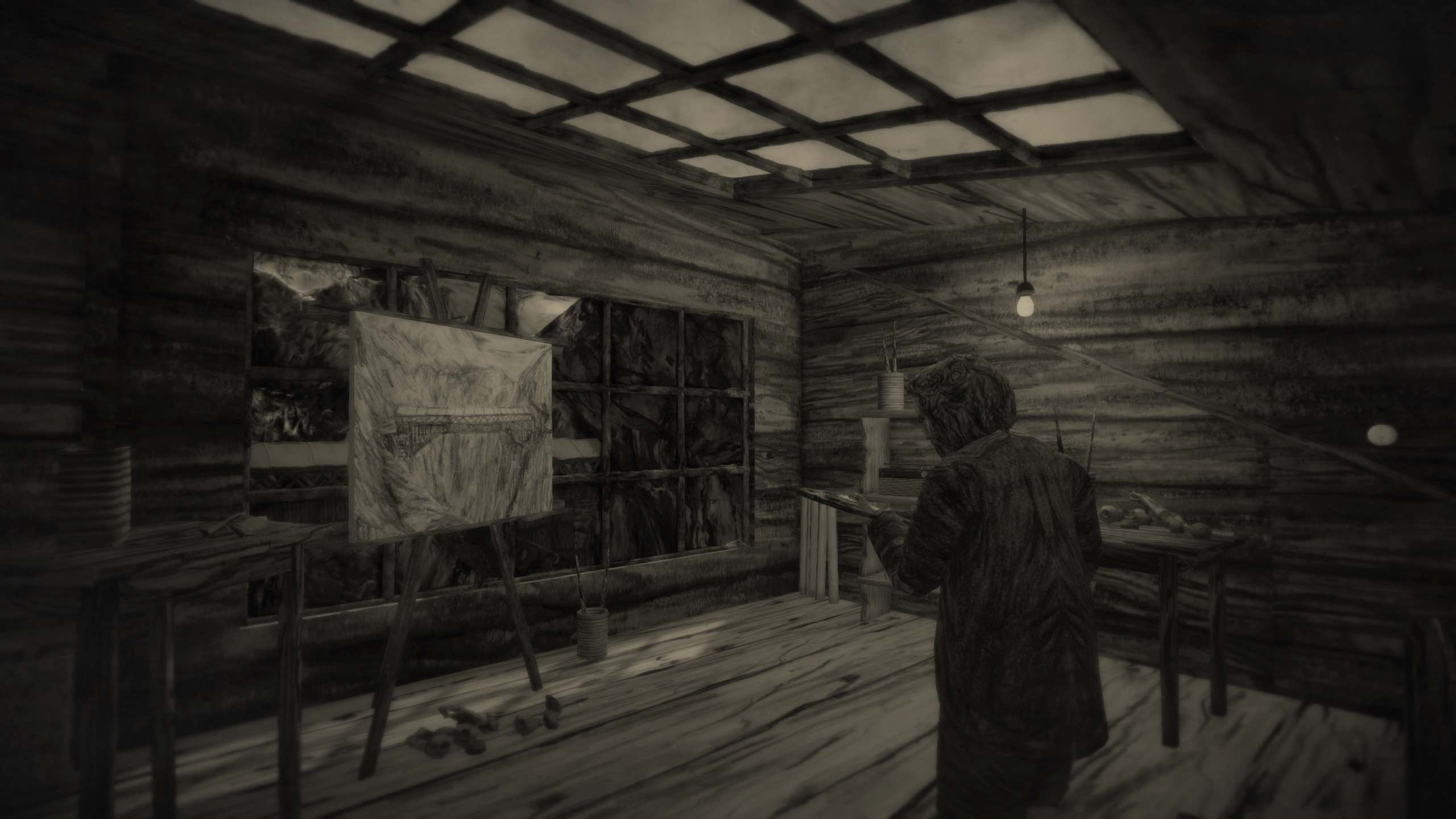 The choice of language is another excellent example of realism in games. What at first may seem like German, is actually a rare local language called Romansh which is spoken predominantly in some parts of Switzerland. That being said, let us move over to what Mundaun doesn’t quite get right. While the black and white aesthetic might be unique, it is not enough when it comes to checking all the boxes of what makes a great game legendary.

At its very core, Mundaun is what it is: a first-person point-and-click adventure/puzzle game that involves a lot of walking and exploring. While this aspect of the game may provide gamers with a lot of downtime which is required to make the experience wholesome, in contrast to sections with more fast paced narratives; it still leaves a little to be desired, when it comes to game development. The 3D landscape over which Mundaun is modelled does not look anything close to the competition from the bigger studios on 2021’s list of releases.

While the protruding and edgy design of the characters and landscape has its own unique look and feel to it, it fails to compete with well developed games of recent times that use better DEM frameworks. The game also tends to get a little too dark at times, not totally but visually, leaving the gamer clueless, searching for clues in the dark with no knowledge of how to progress or where to go.

The puzzles in the game are decent, but the player might find it a little difficult to find relevant clues at times as no clear instructions are presented to them regarding the direction they should go in order to clear levels. The Verdict Regardless of its flaws, after 6 years of blood, sweat and toil, Michel Zeigler has managed to present the gaming community with 10 hours of gruesome storytelling with a captivating visual experience that gets every gamer’s heart racing. The elements of Swedish folklore embedded in the game also manifest across various sequences in the forms of paintings and monsters that contribute to the entire experience.

A special mention has to be made for the talking goat head in your inventory, YES! you heard us right, there is strangely no limit when it comes to the creators exploring the possibilities of the paranormal realms, and being absolutely bizarre in their approach. If you are looking forward to ‘chill’ on a weekend with a game that takes you away on a trip to the mountains, rattles your brain with some puzzles, and which can also give you endless nightmares for over a week, Mundaun is without a doubt the title that you should be trying out first.

In a dreamy white alpine world where reality and myth intertwine, this little village in the midst of the snow will leave all its visitors shivering with dread. In spite of receiving mixed reviews, the game has already developed a niche fan base, who remain true to the horror genre for its brilliant portrayal of the Alps and expressive art style. According to the Washington Post, “The game’s sketchbook aesthetic works favourably to conjure the impression of a Northern European folk tale and offset its rough-around-the-edges character”.

Gamespot also gives Mundaun a positive review saying, “It is an impeccably paced game with satisfying gameplay that fits hand-in-glove with its narrative focus on the process of taking a journey”. Mundaun is a lovingly crafted tale and a deeply personal work of passion.

It is an immersive portrayal of rural Switzerland that gets more uncanny the longer you look at it. Even if it won’t blow away horror veterans, Mundaun winds up being a respectable depiction of the best horror titles and is definitely worth checking out. Distributed by MWM Interactive, Mundaun is a single player adventure/exploration game that is available for Windows, iOS, PS4, PS5, XBox One, XBox Series X, XBox Series S, and Nintendo Switch.