Nothing like sitting down to watch a fantastic horror film and discovering an underappreciated treasure. You should also sit down for this one because this light horror anthology from the 1980s will pull you along for the ride. Screamtime is a British anthology that wraps around a puzzling New York setting. Most anthology wraparounds either tie into one of the stories (like in Tales from the Hood) or recount the stories in a comic, book, or other media. This anthology, on the other hand, employs an immersive audience technique that immerses the audience in each story. It is a long film, but it is well worth your time.

The Newest Thing In Nightmares – Screamtime (1983) 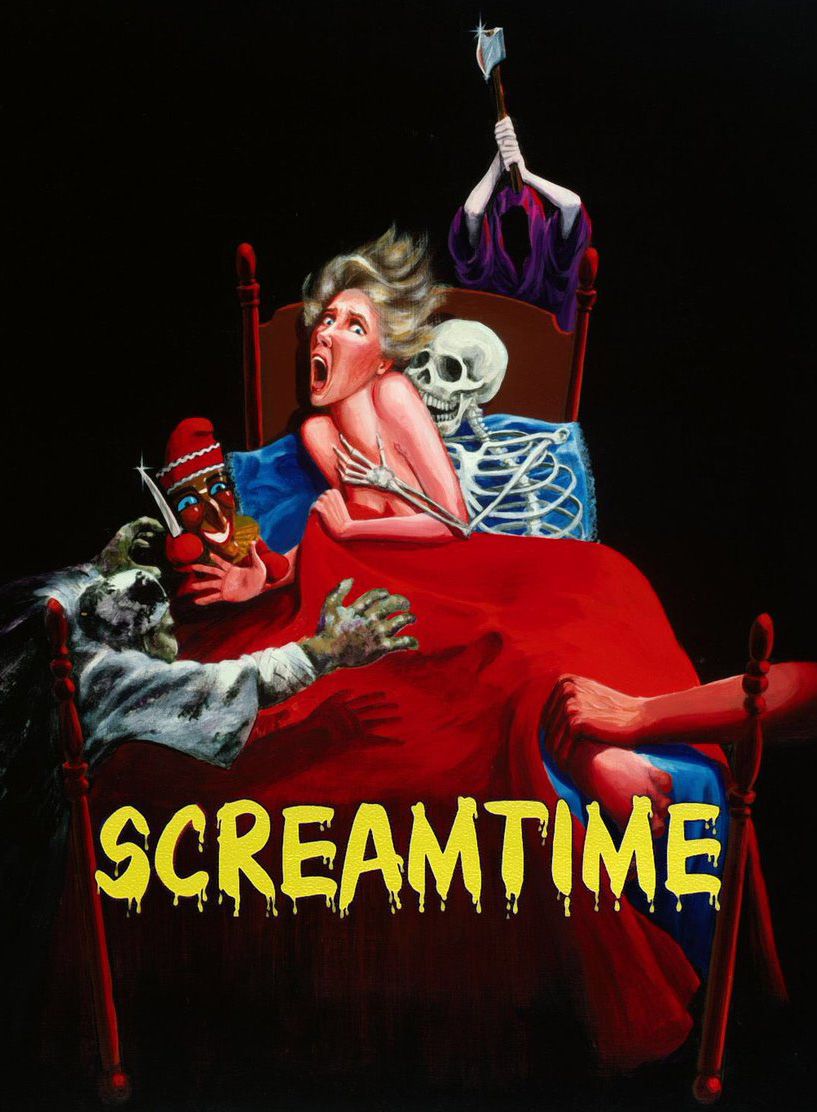 We start this movie in New York with two men heading into a VHS store and stealing a couple of horror movies. They take the stolen films and go to a girlfriend’s house. From her reaction, she is pretty used to seeing them barge in at their own convenience and use her house as a rest stop. They put in the VHS tape, and we, the audience, are immersed in the screen.

The first story, “That’s the Way to Do it,” revolves around Jack, an old puppeteer. He runs a show called Punch and Judy for his audience. Unfortunately, it doesn’t pay enough for him to properly take care of his family. His wife nags him to consider his stepson Damien and her feelings. She wants him to either do something else or move to Canada with her and Damien. But Jack doesn’t want to do either.

His love for puppets takes precedence over his love for anyone else. His stepson Damien takes offense to this. He feels like he is constantly fighting with the puppets for Jack’s love and affection. So, he decides to become a bully and burn Jack’s puppet stand instead. Things obviously don’t go too well for him after that. His girlfriend calls him out on his behavior and leaves him at the beach.

Suddenly, Damien is seen getting beaten up by a plank. The next thing you know, Damien is lying dead on the seashore. The killer is not shown, but you can hear him make the same sounds as Punch, the puppet. Later that night, Jack’s wife is concerned about Damien and ends up having a fight with Jack. She calls him inconsiderate and tells him that she has absolutely no sympathy for him. He pretty much deserved it since he had prioritized the puppets over his family. Funnily enough, she said all this while Jack was repainting his puppets. This issue, however, seemed to be resolved when the couple went to bed. Until it wasn’t.

Jack hears a disturbance and goes to check when suddenly the plank is back again. It beats his wife to death. Jack returns and finds his wife dead. Naturally, he goes into shock and calls a doctor to look at his wife. Now, the doctor suspects Jack to be the killer considering there is no one else in the house. So, he gives Jack some medication to calm down and goes to call the police.

Unfortunately, the poor man ends up dead on the staircase of Jack’s house. We see a brilliantly creepy portrayal of the puppet dancing over the doctor’s corpse. The following day, Damien’s girlfriend comes to see him. She finds the house eerily quiet, so she goes up to the bedrooms. When she opens the door, she finds the corpses of the wife and the doctor hanging from the wall. She makes a run for it, and the killer runs after her.

We see the killer for the first time in this sequence. It wasn’t the puppet; it was Jack. Following an intense chase, Jack falls to his death in a rather funny way. He was grappling with Damien’s girlfriend when he fell into a garbage disposal machine and lost his life. This concludes the first anthology and brings us back to the runaway thieves. They put in another film, and the audience gets immersed once again.

“Dreamhouse” is the second story. It is a really nice story and possibly my favorite one in the anthology. A newlywed couple moves into their new house, where the woman is haunted by visions of death. She keeps hearing noises at night, finding blood in the bathtub, and even finding blood on a knife. Her husband, obviously, doesn’t see or hear the things she claims, but he does his best to ease her anxieties.

He adds new locks and double-checks them at night, but it doesn’t help much. She keeps seeing visions of people and children lying dead on beds and on the floors. So, she gives in and calls a medium to take a look at the house. The medium also doesn’t find anything. In fact, she tells the husband to maybe consider taking her to a psychiatrist. He scoffs at that suggestion initially however he reconsiders his decision later on. After dropping off the medium, he finds his wife unconscious on the floor.

We fast forward to the husband selling the house. A family has shifted in, and his wife is at an institution getting treated. The camera then pans to the family. We see the same family members that the wife saw in her visions. Having handed off the house, the husband gets into his car to visit his wife when lo and behold, the killer slashes his neck and goes into the house. The wife had been having futuristic visions of the escaped serial killer who would go on a rampage at her previous home.

We have ‘Do You Believe in Fairies?’ ending the anthology as a cherry on top. It is a horrible story of a broke beginner motorcycle racer who takes a part-time job performing odd labor in friendly old dears Emma and Mildred’s huge house. They want him to take care of the general maintenance of the home and the garden. Except he won’t need much help with the garden since the fairies tend to it.

They tell him a story of a princess who made a deal with fairies, who then took over a group of garden gnomes. The oblivious and dotty ladies go on about these fairies in the garden and let slip that the property is brimming with valuables. Our bike-riding odd-job man schemes with his scrawny brother and mechanic boss to steal the things in the dark of night, only to discover the treasure is guarded by fairies and gnomes. The garden gnomes attack when the gardener breaks into the house to take the old women’s valuables.

The issue with this story was that there was too much going on. The writers had tossed in a strange ancestral ghost girl with the ability to take the clothing off of the guys with her mind, which sounds cool but adds to the main problem: the gnomes aren’t getting enough action. Nonetheless, it was still enjoyable. Screamtime reminds me of a plate of nachos with everything on top. In a span of 90 minutes, it gives us three different stories with varied premises and feelings. It is a jumbled mix that somehow seems to work well. The 80s aesthetic and the light horror make for a very appetizing Sunday brunch watch. Plus, you can watch it with younger audiences too.