Before H.P. Lovecraft movies became a thriving industry, not everybody who adapted his work respected him. The very first movie based on one of his stories, “The Case of Charles Dexter Ward,” The Haunted Palace (1963), granted Edgar Allan Poe the rights of ownership credit.

And The Curse (1987), the second film based on “The Color Out of Space” after 1965’s Die, Monster, Die! and the first Lovecraft movie after Stuart Gordon’s doesn’t recognize the source at all. David Keith, who was in the Firestarter as well as An Officer and a Gentleman, was actually an actor who directed The Curse as the first in a three-picture agreement with Trans World Entertainment.

When Keith joined the project, the location was changed from California to a location near Tellico Plains, Tennessee, where he owned a property similar to the one held by religious zealot Nathan Crane in the film.  Nathan rules over his family, which includes his lady Frances and their burly, presumably mentally challenged son Cyrus.

Wil Wheaton, who is misspelled “Will” in the opening credits and was riding high on the popularity of Star Trek: The Next Generation, is top-billed in the picture and has his image on the poster. He even enlisted his younger sister, Amy Wheaton, to mark her debut appearance as his onscreen sister Alice. 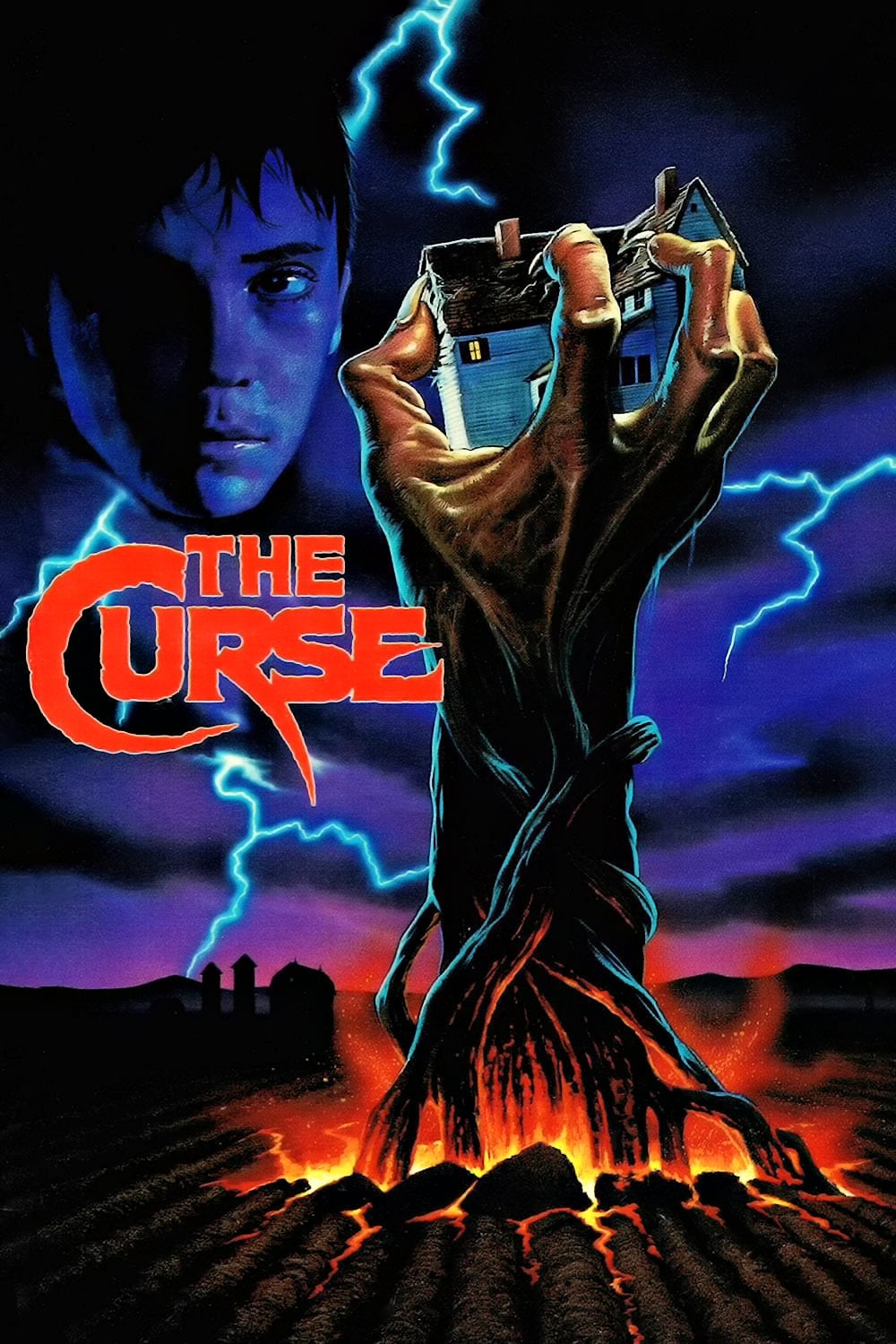 This movie starts with the story of an oddball family. Zack, a teen, resides on a farmstead in Tellico Plains, Tennessee, along with his mom Frances, his younger sister Alice, his harsh and devout elderly stepfather Nathan Crane, and annoying, dim-witted stepbrother Cyrus. Frances slips out of the home one night when Nathan is sleeping and starts having sexual intercourse with Mike, a farmhand who stays in a neighboring shanty. Suddenly, a  big meteorite lands on the property, generating an unearthly light.

The metal arm connecting to the meteorite may be seen on the left as it strikes the earth. The next day, Alan Forbes, a neighborhood physician, visits the crash site to examine the meteorite, which is a big spherical with an outer layer from which a vile liquid seeps.

Despite many movies with similar names, the three successors have little to do with the original film or one another. To piggyback on the original’s cult fame, all sequels borrowed the “Curse” name. The substance quickly dissolves into a luminous gelatinous liquid that seeps into the earth.

Forbes wants to call the authorities, but is discouraged by Charlie Davidson, who is a local realtor and chamber of commerce president, who fears that the occurrence may deter the Tennessee Valley Authority, also known as the TVA from constructing a new reservoir in the region. Forbes’ unhappy wife Esther similarly tries to manipulate her husband into being silent, fearful that their home would lose value.

The mystery liquid quickly begins to have an impact on the farm. The water in the well becomes murky and unpleasant to drink, the fruit and vegetables expand in size but are decayed and inedible on the inside, and the cattle begin to behave aggressively and exhibit serious indications of infection.

Infected birds attack and wound Alice, and a horse almost kills Cyrus. Frances begins to develop enormous boils on her face, which quickly grotesquely distort her appearance. She becomes emotionally disturbed, causing herself bodily pain and hurting her own family.

Nathan believes the blight on his farm is God’s retribution for his wife’s adultery, so he confines her inside their bedroom and refuses to let Zack contact the doctor. Zack keeps him and Alice healthy by drinking clean water and eating food he stole from Forbes’ residence.  According to producer Ovidio G. Assonitis, this film was inspired by the socio economic crises of farmers in the United States of America during the term of the Ronald Reagan government in the 1980s.

Forbes steals a small specimen of the Cranes’ water from their well and gets it tested at a local lab. The water is discovered to have a peculiar, unknown ingredient that alters its metabolic capabilities and molecular structure. Carl Willis, who is a TVA official inspecting the region for the proposed reservoir, visits the Cranes’ home searching for a drink of water.

He has barely begun drinking after helping himself to water from the kitchen tap when he is assaulted and nearly murdered by Frances, who now has gone wild and is hideously mutating. Concerned that Forbes may inform the officials, Davidson and Esther come to the Crane farm in search of the doctor, only to be attacked by diseased dogs that have turned feral. Wil Wheaton has previously stated that the only positive aspect of the film seemed to be that his sister, Amy, got a role in it.

Esther is then mauled and subsequently killed, and Davidson flees to the cellar, only to be slaughtered and presumably eaten by Frances, who Nathan had trapped in there. The cows start to rot as Nathan and Cyrus check diseased animals in the shed, discovering maggots and worms within. The cows erupt, engulfing Nathan as well as Cyrus in insects.

Nathan and Cyrus have also been afflicted and are starting to go insane. Forbes enters the home, intending to save Zack and Alice, but is startled and killed by Nathan, who subsequently blocks the doorway. Contrary to the film’s credits, the film producer, Ovidio G. Assonitis told the press that Lucio Fulci wasn’t really his co-producer. He claims that Fulci only was in charge of the second unit.

Cyrus assaults Alice, but Zack defends himself by fighting him off and hides his sister inside a cupboard. Nathan has cornered Zack and is intent on killing his stepson when Willis arrives and stabs him. The earth beneath the house starts to glow and heave, and the house begins to break apart.

Zack finds his mom only in time to witness her deformed carcass melt into liquid. Cyrus confronts Zack as he prepares to depart, but Zack pushes him off the railing, presumably killing him. As he tries to stop Zack, Nathan is struck over by a support column. Willis pulls Zack as well as Alice out from the home before it crumbles and all of them die inside. Falling debris kills both Nathan and Cyrus. Willis exits the property, bringing Zack as well as Alice with him.

A fully bandaged Willis sleeps in a hospital bed months later, having been infected more slowly since he only drank a little quantity of the farm’s water. He’s watching a news story on how officials are assuring that the agriculture plague from the farm would be eradicated. David Keith made his directorial debut with this film.

Later, in the neighboring countryside, at night, the earth and trees begin to quake and break apart, showing more of the bright alien liquid spreading across the surface. A vast quantity of the substance arrives, implying that the malevolent mutagenic organism is still alive and well, intending to finish its takeover of Earth. Wil Wheaton has claimed that he did not want to be a part of this film. His family forced him to do it by showering him with cash and a free holiday to Rome. Originally, Treat Williams was considered for a part in the film. 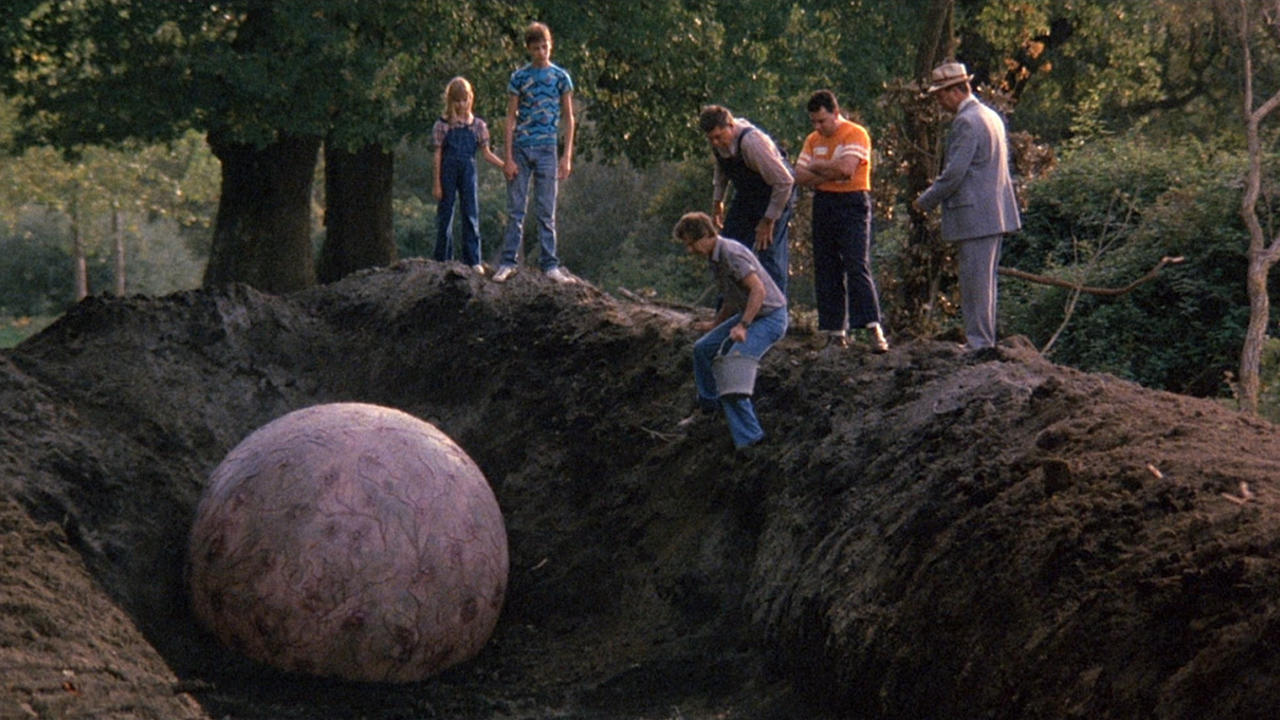 Wil Wheaton and his sister are excellent performers. And those are the only movie characters most viewers care about.  The mother figure is particularly scary since she evolves throughout the film. This particular type of  Horror was maybe influenced by director Lucio Fulci.

But there are gory sequences here that rival Fulci’s. Not the “flesh-ripping” kind of gore, but the “let’s see what terrible things we could do to food” kind. The Curse is definitely not really a movie to be eating food while watching. Director David Keith not only brilliantly captures a thick and stinky down-home hillbilly environment, but he also expertly creates and maintains a frightening and unsettling tone.

Keith also arranges a few shock props with flare and ability; an ambush by hostile hens and the famed worms-in-the-apples scenario is particularly unpleasant and unforgettable. The over-the-top apocalyptic conclusion is also a lot of crazy fun.