The Man from Toronto Detailed Movie Review And Ending Explained

The Man from Toronto Detailed Movie Review And Ending explained. 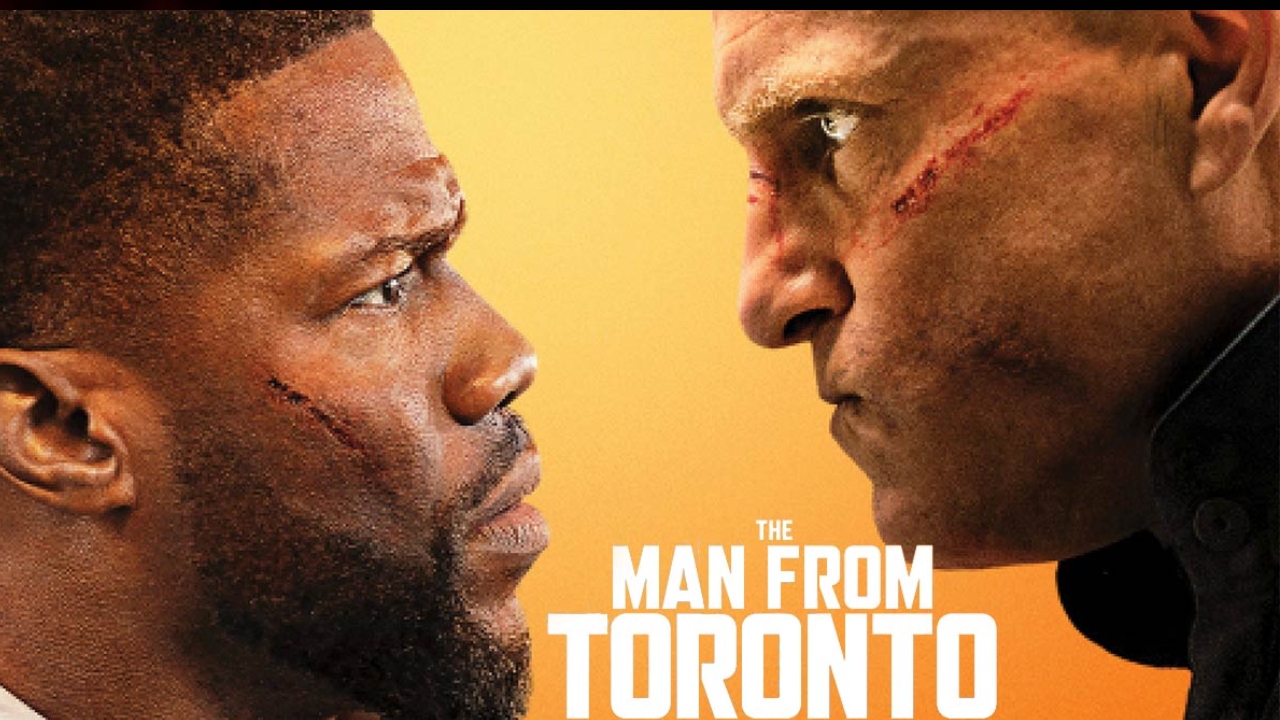 “The Man from Toronto” is an action comedy movie directed by Pratrick Hughes and starring Kevin Hart and Woody Harrelson. The story narrates about two absolutely polar opposite men crossing path and developing a genuine friendship along the way. At one end we meet Teddy who messes everything up but has a really generous heart and on the other end Toronto who gives a persona of a pretty scary guy. We basically don’t get to see Toronto chopping off body parts as his reputation suggests. The two men bring a positive change in each other’s life although the journey had quite a few rough patches. It’s a pretty decent watch with some good punches and comics and scenes with classic “Good guys survive and villains lose and no harm done” plot. The movie is currently available on Netflix. Let’s have a look into some details.

The movie starts with Teddy Jackson (Kevin Hart) being shown via some funny and cringe online videos where he is trying to launch some big sensational equipments and failing miserably. Starting from his elastic resistance band (TeddyBand) hits him on his face to some sweaty plastic gym wear and height adjusting dodgy pull-up bar collapsing on top of him. Even his beautiful and tolerant wife Lori (Jasmine Matthews) finds his inevitable goof-ups hilarious.

She says that her law-firm colleagues uses the phrase “Teddy-ed it” whenever anyone screws up at work. Next, the mysterious man from Toronto (Woody Harrelson) is introduced in a dangerous fashion, narrating the story of his grandfather getting brutally filleted by a bear and showcasing his set of sharp knives. The notorious contract killer’s reputation of inflicting pain with mercy is quite noted for the victim to blabber all the required information.

Well, Teddy promises his wife that he will not mess up this time at work or ruin her birthday surprise. Teddy goes to Marty’s gym to pitch the idea of non-contact boxing to him but he says that it is the stupidest idea he has ever heard. Marty is even more furious as Teddy messed up again by not adding any contact details on the flyers. Thus, Marty fires him from the job. Now, the actual mix-up happens. 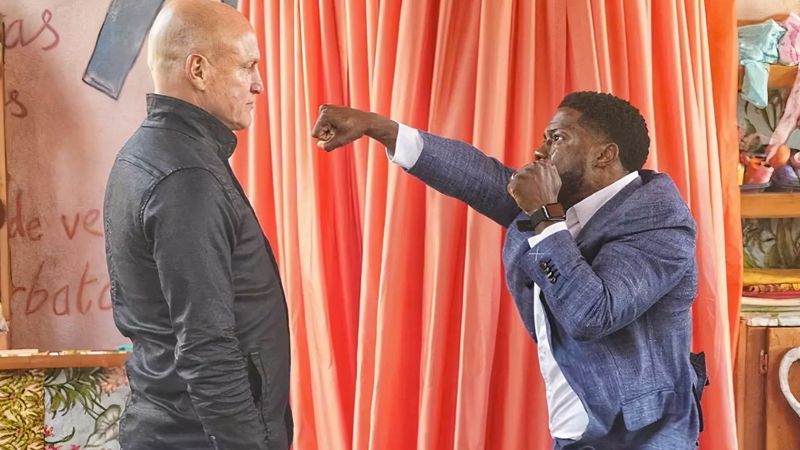 Teddy has booked a cabin for a romantic birthday surprise for his wife and sends her to a Spa and goes to the cabin to decorate it. But, as usual the address is not printed properly and he arrives at the wrong one. The goons are waiting for the MFT to come and torture some international criminal and confuse Teddy to be that and thereafter the FBI snags him too because of that. Once, the confusion is clear, the FBI asks him to keep pretending to be the MFT and help them to get hold of a high profile international criminal, Sebastian Marin.

He deals with the FBI as they agree to repay all his loan and offer a full paid luxury shopping and dinner for his wife. His jealousy and bickering over Santoro (a handsome FBI guy) is quite comical. They go to DC to meet Marin but Teddy gets high jacked to some other place. On the airplane, the real MFT shows up and kills the other goons and lands midway. Toronto calls his unidentified handler Debora and she warns him of the consequences of sparing Teddy’s life.

Here, starts the bromance between the overexcited, hypersensitive Teddy and serious sarcastic Toronto for the later doesn’t seem to be as brutal as his reputation. The scene cuts to Miami where an infamous killer called ‘the Man from Miami’ is seen brutally killing a man named Philip Beaumont and getting a call from his handler regarding a work in Puerto Rico.

Toronto prepares Teddy to impersonate him, teaches him the different knives and forces him to go attend a meeting with Mr.Green in his place. On the elevator, Teddy says that all these wouldn’t be happening if he had changed the toner in his printer. Toronto preaches him to come out of his imagination and go finish the job and scares him off by threatening to harm. Teddy is so scared that Toronto starts laughing.

He says that it’s just a scary look and Teddy hugs him. At the conference hall, four men are held prisoner and Teddy’s job is to identify the real Mr.Green. While trying not to sabotage the plan, Teddy cuts the corner of one of the man’s eye in nervousness and vomits on them. Mr.Green can’t take it anymore and reveals the truth which impresses Martin’s men. One of the gunmen catches the Bluetooth in Teddy’s ear and was about to kill him when Toronto barges in and shoots them down. On the other hand, the Man from Miami (MFM) has reached Puerto Rico.

Toronto starts interrogating Mr.Green asking the reasons behind him getting paid to hand over Green to Marin.  Mr. Green confesses everything about DARFA and in return he cuts his thumb off. Teddy is shocked and refuses to deliver the thumb to Marin. As they are arguing, MFM attacks Toronto, throws Teddy off the balcony and flees with the thumb. Toronto runs after the killer and Teddy is seen hanging on the revolving centrepiece of the mall.

The fight sequence is quite hilarious as Toronto and the killer keeps firing at each other and Toronto accidentally hits Teddy’s butt and he starts slipping. He finally crashes on top of the killer and brings him down. Toronto dresses Teddy’s wound, which is just a slight graze by the way. He actually realises non-contact boxing made his butt is quite flexed and Teddy explains that it’s a great form of cardio.

Toronto’s handler calls him to get the brief and when he asks if she heard from Martin, she denied and asked whether he saw his face yet or not. Teddy observes that the handler was lying as she repeated the question asked. He tried to convince Toronto that it’s a sales tactic but Toronto disagreed. On the flight to Dc they started having a discussion when Teddy said that he read his file and that Debora wouldn’t want this. In return, Toronto made him realise that he is scared of his failure and may be a misfit for his wife. He calls Lori to apologise but Toronto cuts the call midway.

Toronto takes Teddy to the restaurant where they join Lori and her best friend Anne who seems interested in Toronto. The FBI guess that the man could be the one they are suspecting and prepare to trap him. Toronto corrects that Debora is not a woman but a “1969 Dodge Charger 440 R/T).

Anne further chips in that it’s not just a car but an eight cylinder of big block, high torque horsepower high tech weapon. Anne notices a tattoo on Toronto’s palm and asks if he is a chef. He agrees that he wanted to open up a restaurant and then realised no one would come. Both the men are dancing with the ladies when Teddy sees the killer again and escapes with Toronto. Toronto is in his romantic haze asks Teddy whether Anne likes him but the killer comes after them. The killer reveals that Toronto’s handler has double crossed and ordered him to finish the job, saying, “She said you’d gone Minnesota again.”

They get into a fight again and this time Teddy accidentally hit Toronto’s leg and so the killer manages to escape. They decide to steal a cop’s car and intercept Mr.Green’s thumb. The MFM and Toronto’s handler visit Marin and deliver the thumb and he says they will receive the money after the fingerprint works. The FBI could track the cop car and starts following. In the car, he recalls the Minnesota memories and says he spared the life of a man there to break the never-ending cycle and that backfired.

Teddy explained that Toronto is exactly like him, scared. Marin bids his the time when he can put his plan into action as he watches Washington DC celebrate their new president. Teddy and Toronto breaks into the hotel room and confuse everybody with their identities faking that he is the real man from Toronto and that Toronto is his Driver Wendell with whom the handler is being talking for the last twenty years. They successfully delay the plan and in the meantime, the FBI drops in. They all manage to escape separately and Teddy returns back to his home to find it empty. He meets the FBI agents who inform him that it was not MR.Green’s thumb but matched with Marin’s gunman from the conference hall. They realise that the bomb would have never blown off and that Toronto never intended to carry on with the plan. Toronto gets a call from his handler to return back the money that he managed to escape with from the hotel.

Teddy gets a message from Lori and hurries to stop her at the train station but is interrupted by the MFM. While he is beating him up, Toronto comes to the rescue. Torontó’s handler sends the deadliest assassins from Tokyo, Moscow, and Tacoma to kill Toronto and they attack him inside Marty’s Gym. The handler’s also enters the scene with a gun to shoot both of them when Toronto asks Teddy to pull the Lever.

Well, the broiler opens and she slips inside and they manage to jump before the warehouse blows. Toronto says that the killing cycle ends today and lets Teddy drive his Debora to meet Lori. Teddy is about to kiss Lori when the train crashes Toronto’s car and they are shocked.

The story moves to one year later where Toronto and Anne meets Teddy and heavily pregnant Lori at his newly opened restaurant. Teddy shares good news with Toronto saying that he will make him a partner at his online Gym and hands over a cheque. The movie ends on a playful note showing Toronto still mad at Teddy for ruining his precious Debora.

The real motive behind Marin’s disastrous plan: Why was Teddy chosen to interchange place with the real Toronto?

The FBI wanted to pretend to the Man from Toronto but he couldn’t understand the reason behind this. They explained that they discovered the phone of the man who let Teddy enter the cabin and that showed a photo of him. Just before they attacked them, he had sent the photo Sebestian Marin, former Venezuelan colonel. So everybody now thinks that he is the real Toronto. That’s the evidence and the only way to catch him off guard is by sending Teddy to meet him, disguised as Toronto.

What was Marin’s actual Plan?

Sebastian Marin plotted to overthrow his own government and the US Intelligence stopped him. He managed to leave the country with his wife but he wanted revenge ever since. He planned an attack on the US president and the FBI cannot track him. Later Toronto managed to kill Marin’s men who held the four men hostage and made Mr.Green confess everything. He told them about DARFA (the Defence Advanced Research Projects Agency) where he worked on seismic explosives. It’s basically a bomb that blasts but cannot be traced. 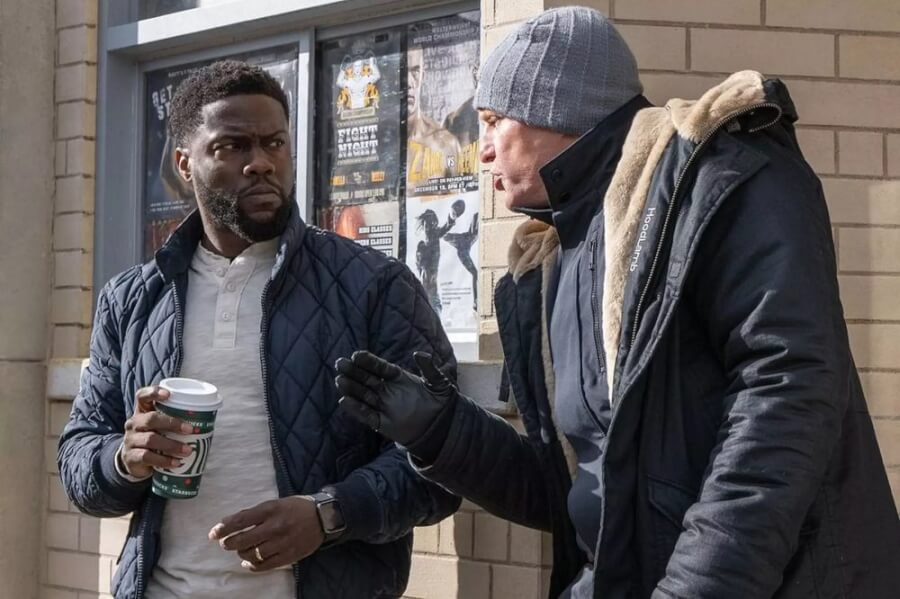 Two years ago, their former boss was asked to help an unknown client with a top-secret project which turned out to be Marin. He had hired General Hanson to blow up the Venezuelan Embassy at Washington. When they came to know about their plan they added two safety features to the system, Coughlin’s coded sequence (which they got earlier from the man himself at the cabin) and Green’s Thumbprint. Marin’s plan wasn’t successful at the end.