The Mask, the green-faced, body-less monster most known for Jim Carrey’s portrayal of the character in 1994, has a complicated comic past. It covers over a decade and contains a number of crossovers and out-of-print titles. The Mask, often known in the comics as Big Head, is the main antagonist of the Mask comic book series and franchise, which was originally titled Masque.

He is the corporeal manifestation of the famous Mask of Loki’s magical abilities, which were previously possessed by anybody who put it on their face. The Mask is a fascinating figure because it causes the person who wears it to lose their sanity, and it utilizes the person who wears it as its host, wreaking havoc wherever it goes. The comics are noted for their extreme violence as well as their wit.

Lobo is a complex villain, whereas Mask is pure anarchy. Lobo is a well-known anti-hero/anti-villain from the world of DC Comics. He has had run-ins with superheroes like Superman, but he is also occasionally partnered with them. He is a bounty hunter who deals with his many enemies with brutal severity. He is a satirical take on violent anti-heroes from fiction.

He has the build of a musclebound albino man clad in motorcycle gear who exudes immense strength and longevity. This is not to say he is no match for the Mask when it comes to havoc, though. Lobo is also a fan of chaos. He is famous for being the first Czarian to kill his whole species by murdering all other Czarnians for a high school research assignment.

It appears that we have two insane villains on our hands. We watch them collide in ‘Lobo vs. The Mask,’ a short but immensely enjoyable comic. What is the premise? Violence. 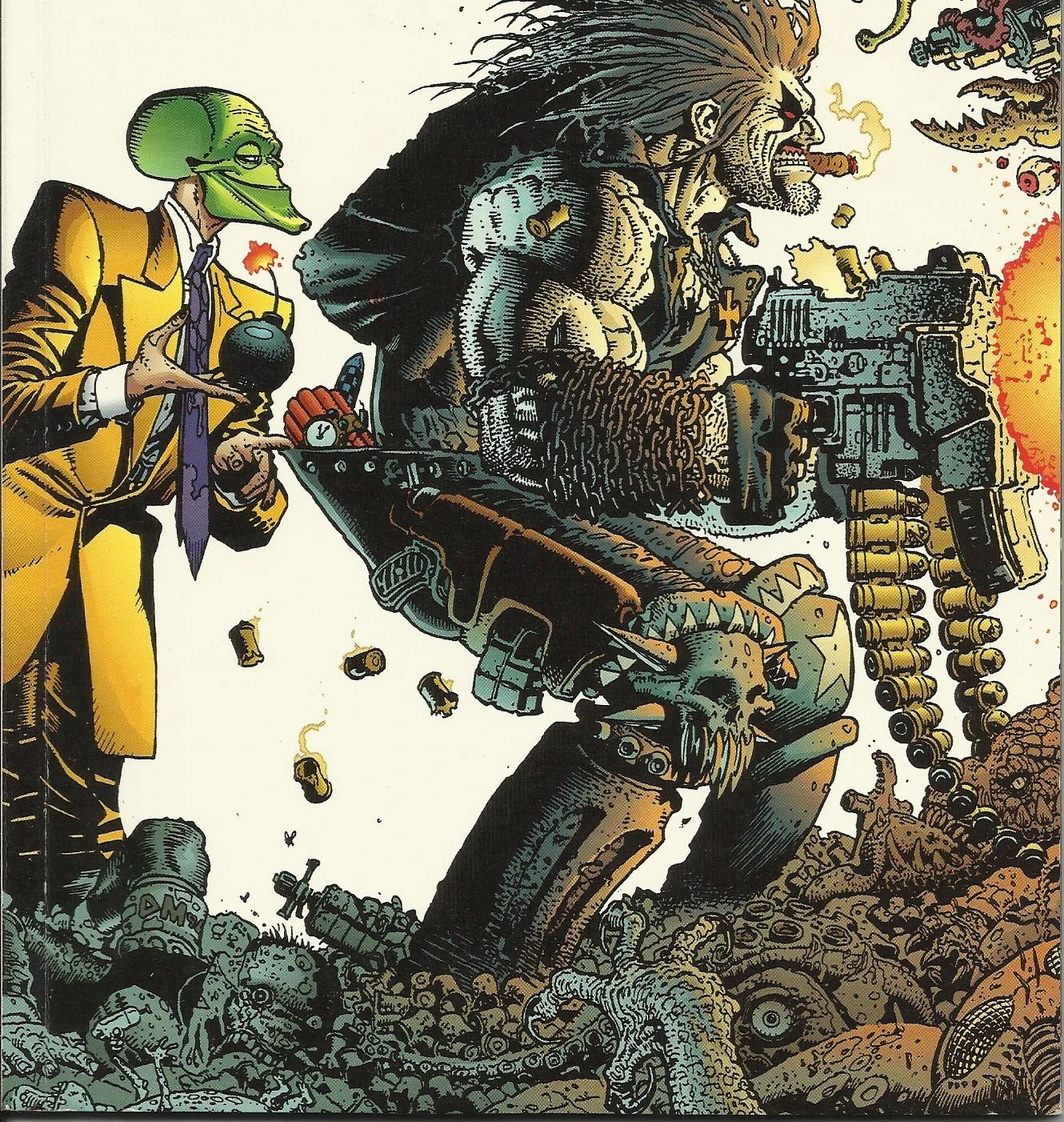 We start off with a petty thief, Ira Straub. He was walking down the street after a long day of not stealing enough money when he saw an old lady. Of course, like most people, his first thought was to swindle her.

Except it wasn’t an old lady, it was a cop disguised as one. Ira manages to hide from the cop in an alley, where he finds the abandoned Mask. On another planet, we see Lobo is being told about the intensely violent crimes committed by the Mask. Initially, he isn’t interested because he is on vacation. He is then told about the one billion cred bounty on the Mask, which changes everything.

While Ira is walking with the mask in hand, hoping to sell it for a bit of cash, the alley is flooded by alien troops. He wears the mask and turns into The Mask. Now The Mask is a scrawny green-headed villain, so it is understandable for the aliens to think that he is not the genocidal beast they have been on the lookout for.

The Mask does a couple of transformations to mock them and ask them if that is more threatening, and then proceeds to annihilate the entire crew. While the police officer is calling for backup because of an alien spaceship landing, Lobo shows up. The officer tries to scare Lobo who blows his head away in response. The backup team also arrives just then only to get blown up by Lobo.

Meanwhile, the Mask has dealt with all the previous aliens and seems to be brushing his teeth in the alley. Now, this is where the comic starts drifting away from a solid plot to just vibes. The story completely heads into senseless and intense violence with the scenes changing like the direction of the wind.

One minute the Mask is a boxer, the next he is a dignified writer writing the story of their battle, to suddenly being in a movie hall figuring out how the fight went. It was honestly quite difficult to keep a track of all the different things that kept happening. When they finally started fighting, Lobo punched the Mask only to find out that his face moves like it is made of rubber.

So, he decides to choke him, only for the Mask to extend his neck to the back of Lobo’s head. Lobo decides to use the Mask’s elongated neck like a lasso and throw his neck on a moving vehicle. The Mask’s footfalls off in front of Lobo making him believe that the Mask is dead. Except, the green-headed villain starts to grow out of his foot back into a complete human being.

The two are well-matched chaos lovers who live for violence. So, we see them continuously doing things that don’t make sense to us. They end up going round and round the world and even scarring some tourists on their way to the big Ben. The Mask then seems to embody King Kong.

He proceeds to eat Lobo, who goes inside the stomach and cuts it open. Suddenly there is an explosion happening at the building. Both the characters are left with just their heads. So, they do the most logical thing and start fighting with their heads, carrying their weapons using their tongue.

They wait for their bodies to regenerate when the Mask strikes a deal with Lobo. He tells him that the one he is looking for, the ultimate Bastich, is not the one wearing the Mask right now but its previous owner. So they decide that the Mask will help him find the previous owner and take ten percent of the bounty money. 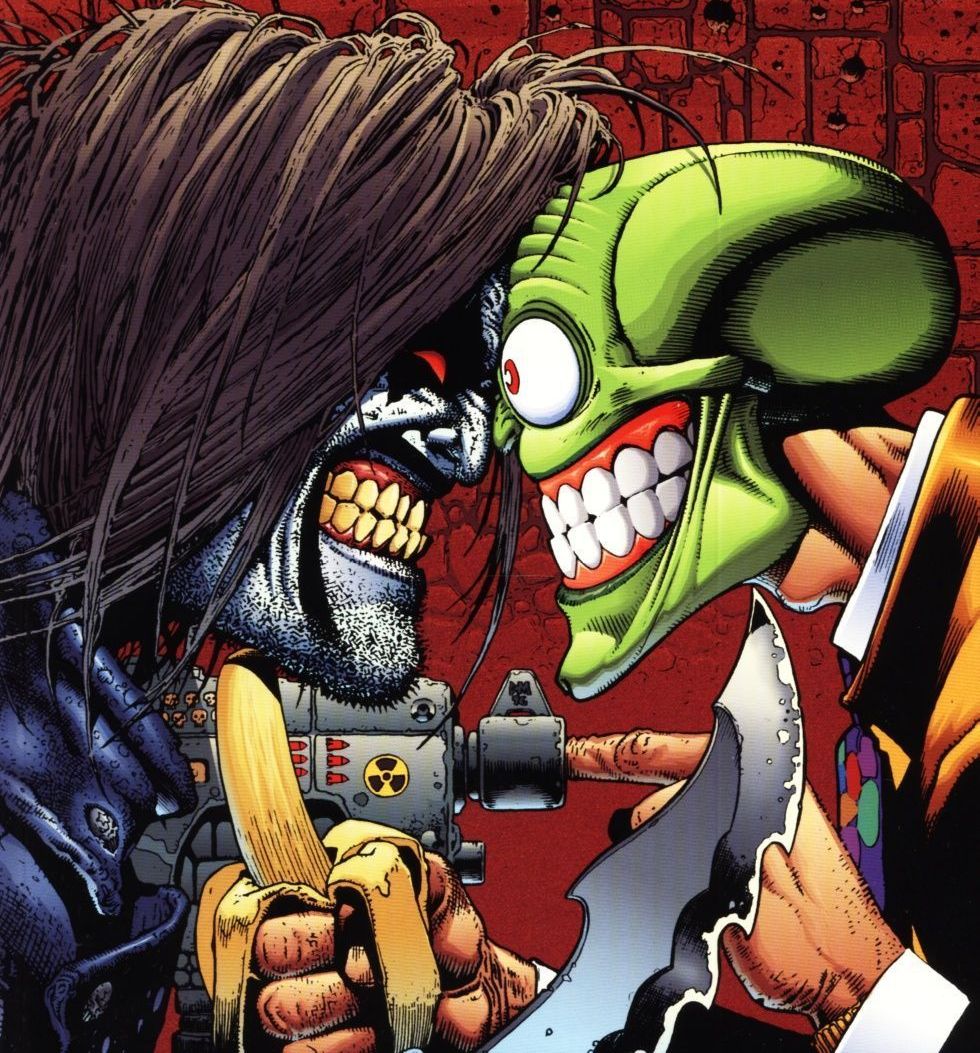 We start off with violence itself. Lobo and the Mask attack an extra-terrestrial who, according to The Mask, is the previous owner whom Lobo has been looking for. They fight the alien, and The Mask informs Lobo that this is not the person they are looking for but that the alien has told The Mask where to go for their next target. They have again provided us with panel after panel full of gore and blood, with the Mask acting as an instigator and cheerleader of the violence.

Lobo is starting to get wary, considering this is the sixth time he’s killed someone on The Mask’s orders, only to be told it was the incorrect person. However, he still decides to trust the Mask as they travel to another planet. They go to a giant war and weapons store to restock their supplies on the new planet.

The dynamics between the two are full of banter and squabbles. They keep pulling pranks on each other and using their virtual immortality as an excuse to blow each other up every now and then. At the weapons depot, they uncover a giant gun at the armament station and use it to blow up a planet, which sets off a chain reaction that destroys several surrounding planets. Since they are lovers of chaos and violence, all they do is laugh and proceed to hunt the sun and the moon.

The two then find a bar, which is known to be the toughest bar in the universe. Of course, Lobo is unaware when The Mask causes a ruckus and directs it toward Lobo. He tells everyone that Lobo is a bounty hunter, and he might be after you. This enrages everyone and results in an attack against Lobo. Lobo, obviously, makes mincemeat of all his adversaries with his customary savage panache. He finally confronts the Mask, confronts the wearer, and appeals to his human emotions. Finally, Lobo comes to his senses and removes The Mask from the criminal who is wearing it.

However, Lobo makes the mistake of putting on The Mask, which leads to an extended sequence of fighting. He encompasses multitudes in him, especially with the Mask, but they all craved murder and violence. In his process of mass destruction, where he murders and pillages planets, he flies through a black hole.

Lobo passed through the black hole and wound up back in time shortly before he arrived to try to steal The Mask from the small-time robber the two Lobos figure out. He later wakes up in a Manhattan alley, hungover, and removes the Mask, dumping it into the alley’s litter. Lobo passes his present self as he is flying on his Spacehog back home, as the present one is reaching Earth.

This is when Lobo deceives his former self into accompanying him to the planet that offered him the job in the first place in order to cash in on the bounty. Lobo then paints the back of Lobo’s head green to make him look like he’s wearing The Mask and turns him in for the reward. The green-faced Lobo kept demanding justice which he did not get. Meanwhile, the Mask is waiting for Lobo to show up on Earth all over again.

The entire comic feels like it is on something. The scenes have no solid outline; they only aim to give us unadulterated chaos, mayhem, and violence. The comic definitely delivers on those promises. The editor of the comic has little cameos where he keeps getting violently attacked for wanting a storyline. There is constant chaos between the Mask and Lobo. The comics have stayed true to the characters and provided a story that is just as chaotic as the characters. It feels great to read something this feel-good with characters so grey they turn black.