Just like our world, but in endless variants – if one follows this logic, the Upside Down world of Stranger Things may easily be one of these many possibilities. While the origins of this enigmatic parallel reality remain a mystery, the existence of this alternate realm is inextricably linked to the Mind Flayer.

As a result, we recommend that you prepare yourself for today’s movie, in which we will explore the depths of the Upside Down, learn how portals were constructed, scout every species that belongs there, and learn what prompted the development of this dimension in the first place.

You would best be prepared!

What Is The Upside Down World?

Imagine the human world – the same place, the same infrastructure but one that is scary, dark, deficient of humans but at the same time infested with viscid, ropy moving root-like tendrils along with slimy, slithering tentacles, and the entire place happens to be enveloped in a seemingly ubiquitous fog. Yes, that would be the Upside Down! This alternate dimension here has elements of light, gravity as well as sound working in the same manner as Hawkins; just that the sound part, which takes place in Hawkins is barely perceptible in the Upside Down. To be fair, it sounds more like a reverberation.

Now, coming back to the television series, young children possessing powerful psychic powers were part of an experimental program at the Hawkins National Laboratory. They were given lessons on a regular basis and also recompensed for their levels of development as well as strength.

On the fateful day of 8th September 1979, one of the children, Eleven, while trying to escape from the lab with an orderly got misled into setting free Number One, the blueprint of the whole experimental program, who no points for guessing happened to be the orderly himself. Post refusing One’s proposal to join him in wiping out humanity, Eleven was forced to protect herself, and fight back against his psychic attacks.

However, rather than killing One, Eleven simply had his body projected into an alternate dimension, or in other words, the existing Upside Down. She also had the terrifying memory of this particular day suppressed deep inside her subconscious mind, and it was only years later that the memories resurfaced.

Of course, Eleven became the primary focus of all the experiments carried out by Dr. Brenner. As part of her experiment, she was made to immerse in a deep psychic state in a flotation tank and her extrasensory perception let her observe people located in different parts of the world and in some cases, even different dimensions. Contact with the Upside Down world was established when she inadvertently came across the Demogorgon and post making contact with the creature, a gate between the two dimensions was cracked open at the Hawkins National Laboratory.

Now there happens to be a lot of wild theories pertaining to the Upside Down. One, for instance, states that the alternate dimension is actually the future version of Hawkins. Apparently, the Mind Flayer had been successful in escaping the Upside Down and for obvious reasons let loose unbridled hell on Hawkins.

This is why the US government had no choice but to nuke Hawkins so as to prevent the Mind Flayer from annihilating the rest of the world. Of course, they couldn’t really kill the Mind Flayer and therefore resulted in a hellscape version of Hawkins. Speaking of the Demogorgons, they are nothing but mutated humans but that’s not even the crazy part.

The most ridiculous part of the theory states that the portal is actually a gateway between the past Hawkins and the future. This is what led the Demogorgon to go through in search of food and as far as the thing concerning the Mind Flayer’s intention of controlling Will, well, the entity just wants to restart the whole process.

How The Door To The Upside Down World Was Created? 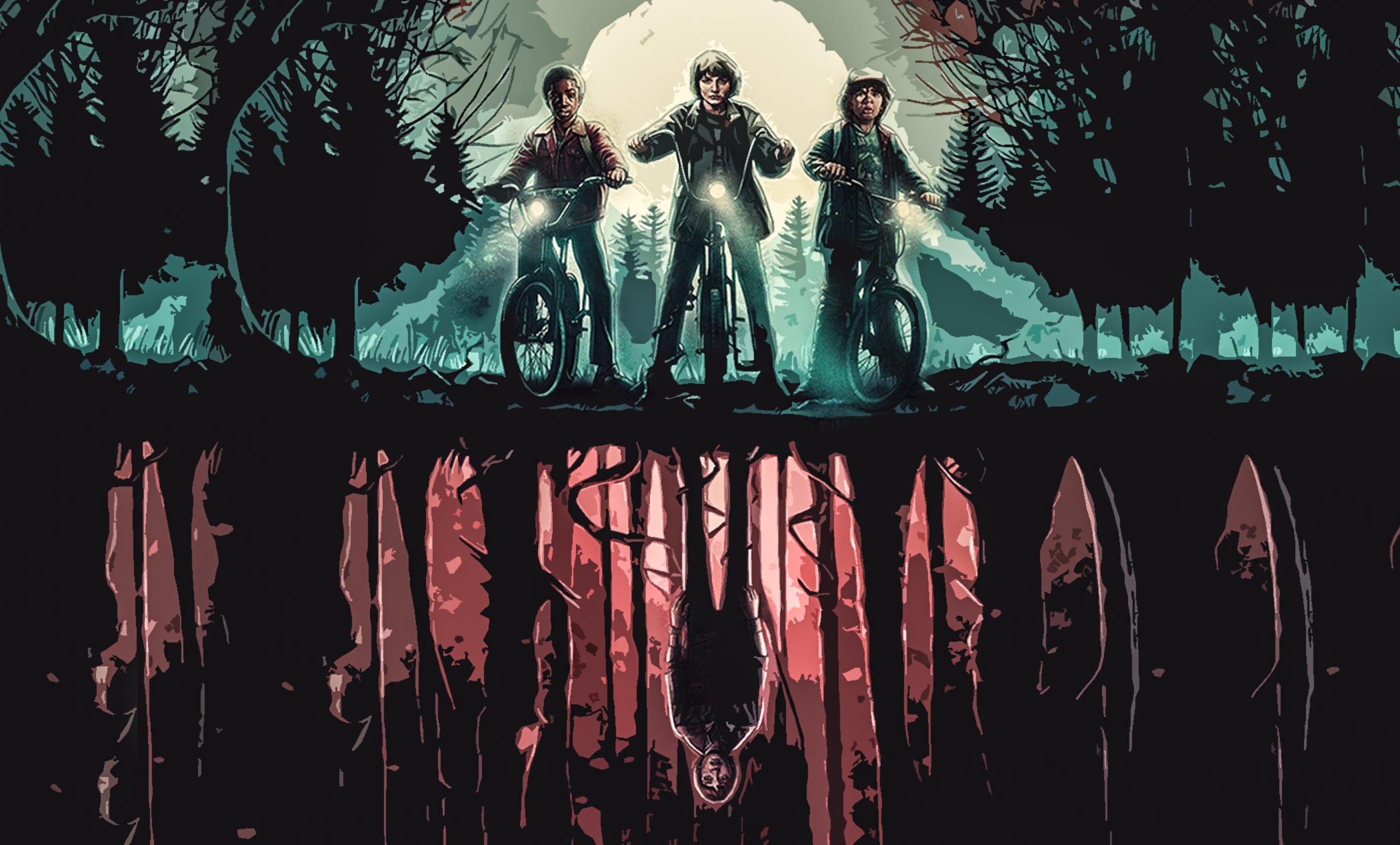 Looking at the fourth season, we have portals popping up literally everywhere where the characters have been shown to get killed by the ghoulish, powerful lich, Vecna. Let’s begin with Chrissy Cunningham; when the spell caster kills Chrissy, she is at Eddie Munson’s trailer. First, she is seen elevating and then getting stuck up on the ceiling of the trailer. Her death left some kind of organic material on the trailer’s ceiling, which created a portal to the alternate dimension.

Next, let’s talk about Patrick McKinney; he was killed in the Lover’s lake and Steve ended up finding another gate there. As for Fred Benson, we are waiting for the second volume of the fourth season to reveal if the highway where he was killed is really another doorway to the Upside Down world or not because the first volume clearly did not revisit the site.

Speaking of Vecna, the fourth season’s main villain, this undead creature of great power is seen to make use of a rather compelling psychological connection to link himself with his victims, ones that are mainly experiencing nightmares, headaches, and nose bleeds, and have trouble while sleeping. All Vecna has to do is find those weaknesses post which, he possesses the person and gains control of their mind.

So, while the victims are seen to be in some kind of a state of trance in the real world, in the Upside Down they are tormented and terrified. This is where one needs to put a bit more stress on Vecna because to be very honest, he is accountable for the first gate. Let’s not ever forget the fact that before he became Vecna, he was Peter Ballard, the orderly at the Hawkins lab aka test Subject One, and also known as Henry Creel, the son of Victor.

The confrontation between Eleven and One had the former pin the latter against the wall and separate him atom by atom and in the process, created the first gateway to the Upside Down – a glowing red wall that almost looked alive on the cement tile. As for One, he was seen falling through what looked like a red chasm, then getting struck by lightning and eventually transforming into Vecna.

Every Creature Of The Upside Down World Explored Categorically, the highpoints of the alternate dimension, there are plenty of these creatures that have only gotten bigger and scarier with each given season. We will begin with the iconic Demogorgon, one that has effectively wrecked the sleeping cycle of many fans ever since the series first had the vicious monster on display.

As the high point of the first season, this humanoid predator was able to step foot on Hawkins after Eleven accidentally opened the first gate. It goes without saying that it ended up causing utter chaos post getting just a whiff of blood. Including taking the lives of many and Barb conclusively falls within that list. The creature is also the one to have taken Will the Upside Down. Speaking of the appearance of this creature here, it lacks facial features. Instead, its head opens up like a flower to reveal its cavernous mouth, one that’s filled with needle-sharp teeth.

It’s strong, absolutely ferocious and there’s no stopping it once it gets even the tiniest smell of blood. Season Two puts more emphasis on the lifecycle of the Demogorgon; there are six stages – slug, pollywog, frogogorgon, catogorgon, Demodog, and lastly, Demogorgon.

For those who are wondering why they are called ‘Demodogs’, well, they’re seen walking on four legs and they are basically Demogorgons in dog forms. Season Two also introduces us to The Mind Flayer, the enormous, tentacled, interdimensional entity and the supreme ruler of the alternate dimension. Every living thing that exists in the Upside Down world seems to be connected with the Mind Flayer; right from the Demodogs, Demogorgons to the slithering vines, they all seem to be abiding by the orders of the Mind Flayer.

The entity, also addressed as Shadow Monster, seems to have taken a rather distinct interest in Will and makes use of him to showcase its power in the living human world. It is even seen making Will a part of its hive mind. Season Three had the Mind Flayer use Billy as its host. Here, it starts kidnapping humans while possessing them as well as rats and then melting their bodies, yes you heard that absolutely right, and creating a grotesque-looking physical form. Season 4 introduced us to Vecna along with the Demobats.

The former as a powerful, ghoulish lich has been given various descriptions– an undead creature of great power, a spell caster, a dark wizard to the extent of even being addressed as a spawn of Satan. One look at Vecna and it’s like seeing your worst nightmare. The desiccated, shriveled skin is highly capable of sending chills down one’s spine. The latter, which are known as the Demobats are shown residing in a swarm in the alternate dimension.

What Inspired The Creation Of An Upside Down World? 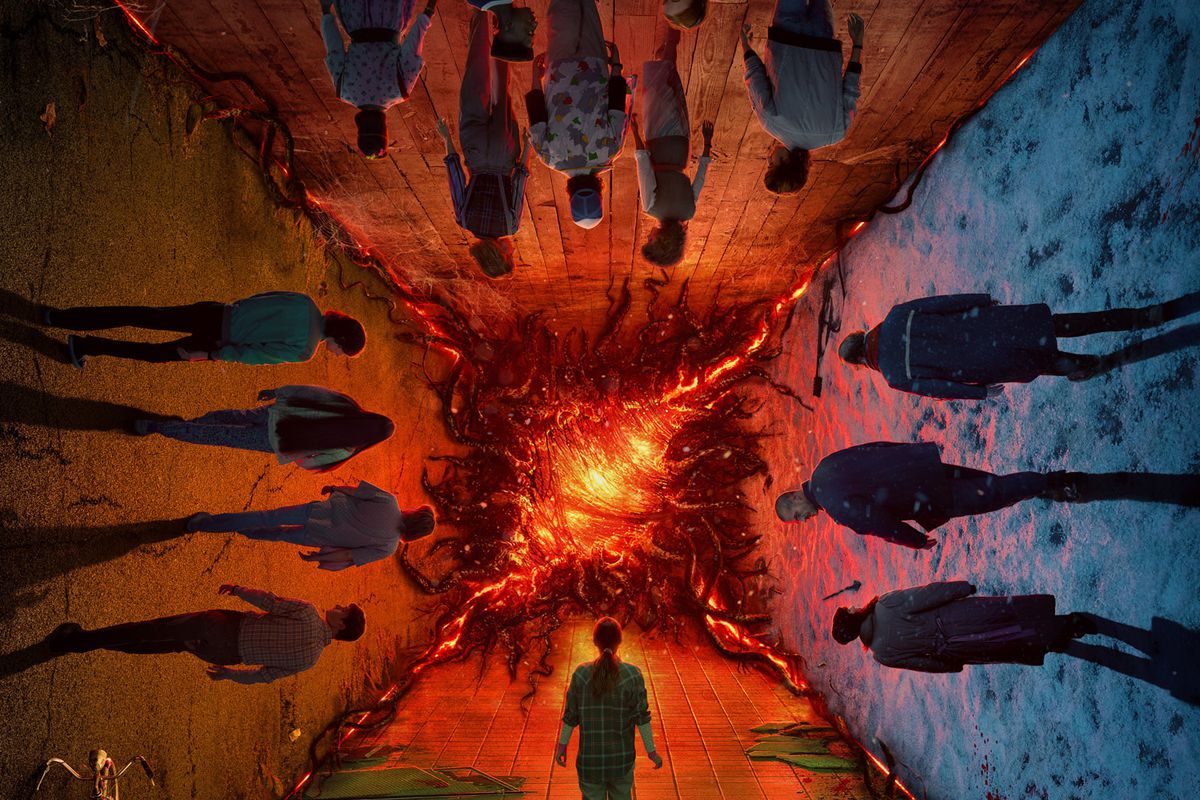 There is a high possibility that the Shadow Plane of Dungeons and Dragons board game is precisely what inspired the creation of the Upside Down world. Like it or not, the Shadow Plane is in various ways regarded as the ditto, dark duplicate of the Material Plane. In fact, the former is actually coexistent with the latter. Does this ring a bell?

Moving on, we will now talk about the similarities of the Plane of Shadow with The Upside Down – both are stripped of colors, hinting at both the worlds being dark. Next, both are home to a horde of foul creatures who in a way don’t really fancy the living or even the light for that matter. Putting further stress on the Shadow Plane, the most popular being there happens to be the Shadow, or in other words, the undead creature who is primarily known to suck the strength of all its adventurers be it on the Shadow Plane or the Material Plane. Does this still not remind you of somebody? It certainly does to us!

The Upside Down is indeed a strange world and with the unfolding of two more intriguing episodes and an entire new season, one can only imagine what all seems to be in store for us. We are literally counting the days until the second volume. What about you? Do let us know in our comments section!