Even though they aren’t technically princesses, the allure of Disney princesses never fades. It applies to figures like Meg from Hercules and Kida from Atlantis: The Lost Empire, but maybe no one more so than Amy Adams’ Giselle, the always upbeat young lady from Enchanted from 2007.

Since the movie Disenchanted was approved in 2010, fans have been anticipating a sequel for the fairy tale heroine who ended up in modern-day New York City. Now, in 2021, we’re finally getting our first thorough glimpse behind the production’s curtain.

The Disney live-action/animated hybrid Enchanted will soon be celebrating its 13th anniversary, and as we reflect on the 2007 fantasy musical starring Amy Adams, Patrick Dempsey, and James Marsden, thoughts inevitably turn to the movie’s long-rumored follow-up. What is going on with Enchanted 2 or Disenchanted, and when can fans expect to see their favourite actors play their favourite roles again in a major motion picture?

Disenchanted’s producers have struggled for the past ten years to bring back Amy Adams’ Giselle, James Marsden’s Prince Edward, and Patrick Dempsey’s Robert Philip, as well as the large supporting cast and the musicians who created the catchy tunes, to the silver screen. Disenchanted has gone through various scripts from various screenwriters, multiple directors, and all other sorts of issues. What has been going on throughout that period is as follows.

Disney began work on the second instalment of the series a little more than two years after Enchanted delighted moviegoers all over the world. The House of Mouse reportedly hired Jessie Nelson (Corrina, Corrina, Stepmom) to write the script in February 2010, and Anne Fletcher (Step Up, The Proposal) was tapped to helm Enchanted 2. The report mentioned the prolonged production of the first Enchanted, which passed through many directors and storylines until it was ultimately shown on television in 2007.

After the initial Enchanted 2 announcement, there was a four-year silence from Disney and all parties involved before Deadline reported in July 2014 that J. David Stern and David N. Weiss, best known for writing the scripts for Shrek 2 and The Smurfs, had been hired to write a new script for the Enchanted sequel.

However, Anne Fletcher was still involved in the production at this point. It was unknown what route the writing team intended to take the Disney film in or even which cast members would be returning for a second run.

Adams appeared virtually on The Tonight Show Starring Jimmy Fallon to promote her role in the upcoming musical Dear Evan Hansen, but it seems sense that the sequel would be discussed given that Disenchanted recently finished production in August. The announcement that Adams had finished filming was greeted by tremendous acclaim from the studio crowd, which was not unexpected given the movie’s cult appeal among Disney fans worldwide.

Despite the nearly fifteen-year gap between the filming of Giselle and Disenchanted, Adams said the experience was more intense this time around. Instead of the three-song parody format of the original, the new movie, which was filmed in Ireland, leans more toward being a straight musical this time around, which proved to be a bit of a struggle for the six-time Oscar nominee:

It was impressive how much more dancing and singing there was. I was in my twenties when I last really danced as much as I’m required to in this, but I’m no longer in my twenties. In your forties, things feel different. When I’m dancing, I feel as though I’m in my twenties, but when I see the recording, I think, “Whoa, that’s not the same.”

According to Adams, the majority of the original Enchanted cast will return, along with some newcomers like Maya Rudolph. Adams referred to the Bridesmaids actress as the “baddie” of the movie, so it’s possible that the villain will be more entertaining than Susan Sarandon’s Queen Narissa.

Adams, Patrick Dempsey, James Marsden, and Idina Menzel will all be back in Disenchanted when we finally return to the world of Andalasia, which isn’t expected to happen until some time in 2022 and will only be available on Disney+.

For Enchanted lovers, good news! The cast of the 2007 movie Enchanted revealed the streaming date for Enchanted as well as the release date for the much awaited sequel, Disenchanted, in a little clip made available by Disney+.

The stars of the 2007 movie, Amy Adams and Patrick Dempsey, made the announcement via a brief video, giving fans a brief preview of what to expect from the pairing of Giselle and Robert Philip. Disenchanted’s filming was completed in August, but the sequel’s release has been delayed since it was approved back in 2010. There will undoubtedly be a lot of ground to cover in the sequel to catch up with the couple.

Adams herself claimed that the sequel is more of a simple musical than the first, which served more as a parody with just three songs added as cartoonish punctuation to the live-action scenario. James Marsden, who played the naive Prince Edward, Idina Menzel, who played Prince Edward’s love interest and was originally Robert’s career-focused ex, and Susan Sarandon, who played Queen Narissa, will all be back for the sequel.

This afternoon during the Disney Upfront event, Disney debuted the first image from the eagerly anticipated Enchanted sequel, Disenchanted. Amy Adams, the star of the first movie, and Maya Rudolph, a newbie to the franchise, may both be seen in the picture. The outfits suggest that Andalasia and its inhabitants haven’t slowed down since viewers first saw there in 2008.

Adams will, of course, return to the character of Giselle, despite the fact that this costume appears very different from the baby blue dress she wore in the original. Malvina Monroe, the manager of the neighbourhood known as Monroeville, is the role that Rudolph is portraying. She appears to be the major adversary of the movie, much like Susan Sarandon was in the original. Idina Menzel, James Marsden, and Patrick Dempsey will all return to their original roles. Yvette Nicole Brown (Community), Jayma Mays (Glee), and Oscar Nunez are newcomers to the cast (The Office).

A performer like Rudolph would definitely devour up the screen in this nasty part, and it’s difficult to believe that an actress of Adams’ level will have missed a beat from the original. The performances, singing, and fresh comedy talent in the shape of Brown, Nunez, and Mays in this much anticipated sequel—despite perhaps not having the most creative plot—could actually offer families a pleasant holiday gift.

Since 2010, a follow-up to Enchanted has been in the works. Anne Fletcher (27 Dresses), who will helm the film, has designated 2011 as the year of release. Naturally, that period passed with the studio having difficulty capturing the plot of Giselle’s subsequent journey. The long-awaited sequel to Disenchanted was finally unveiled at Disney Investor Day in 2020, with Disney+ providing the ideal platform (the original was released in 2007).

Kevin Lima’s directorial responsibilities will be taken over by Adam Shankman (Rock of Ages, Bedtime Stories). Along with Brigitte Hales, Richard LaGravenese, Scott Neustadter, and Michael H. Weber, he contributed to the screenplay as well. After being nominated for three distinct songs in the Best Original Song category for the first film’s soundtrack in 2007, Disney staple Alan Menken has returned to work on the music for the sequel.

Later this year, on Thanksgiving, Disenchanted will launch on Disney+. The official summary of Disenchanted is as follows:

“Giselle (Adams), Robert (Dempsey), and Morgan (Gabriella Baldacchino) relocate to a new home in the Monroeville area ten years after their happily ever after. Malvina Monroe (Rudolph), the community’s administrator, has evil plans for the family. Giselle wishes their life were a flawless fairy tale when difficulties come. Giselle is in a rush to save her family and the kingdom of Andalasia before the clock strikes midnight when the magic backfires.” 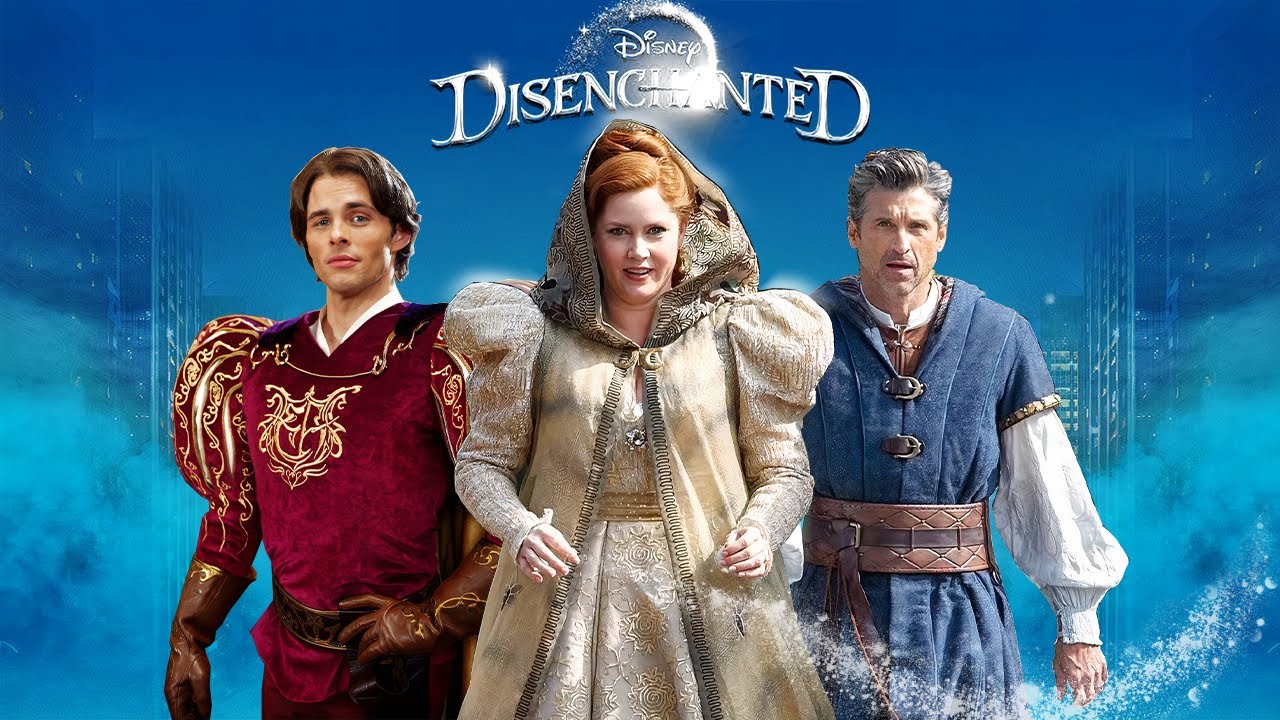 Disenchanted (2022) will be premiering on Disney+ on November 24, 2022. We do not recommend illegal streaming and always suggest paying for the content you like to watch.

Is Disenchanted (2022) available on Amazon Prime?

Amazon prime will not be streaming Disenchanted (2022). Additionally, several other films are streaming on Prime. Our recommendations are The Voyagers, It’s a Wonderful Life, Notting Hill, and Eternal Sunshine of the Spotless Mind.

Is Disenchanted (2022) available on HBO Max?

HBO Max will not be streaming Disenchanted (2022). However, HBO’s subscribers can enjoy its other popular streams like Euphoria, When Harry Met Sally and Promising Young Woman.

Is Disenchanted (2022) available on Hulu?

Disenchanted (2022) is not available on Hulu. The new release line-up additionally includes Pam and Tommy, How I Met Your Father, Abbott Elementary, and Vikings.

Is Disenchanted (2022) available on Netflix?

Disenchanted (2022) will not be available to stream on Netflix. However, other brilliant shows like The Power of The Dog, The Social Network, Tick, Tick, Boom, and much more are available.