The plot of Enslaved conveys a notion of a world moving past the extinction of humanity in a future where everything has been destroyed. Ninja Theory created the action-adventure game Enslaved: Odyssey to the West, which was made available for the PlayStation 3 and Xbox 360 in October 2010.

The game takes place 150 years in the future, after a world war, on a post-apocalyptic planet. It is partially based on the Chinese novel “Journey to the West,” which was written by Wu Cheng’en and was thought to have been published in the 16th century during the Ming dynasty.

Enslaved was originally envisioned as a CGI movie running on the Unreal Engine 3, but it instead debuted on the PlayStation 3 and Xbox 360 in the face of fierce competition from major publishers, including Call of Duty: Black Ops, Assassin’s Creed Brotherhood, and God of War 3. Despite being an undiscovered game in a sea of well-publicized sequels, Enslaved nonetheless manages to stand out by having a solid script, excellent level design, and a distinctively captivating look.

The game’s development started after the writers were inspired by Life After People’s design. Alex Garland manages to weave a beautiful dynamic between the two protagonists, Monkey and Trip. The duo must travel through the wasteland, fighting groups of mechs, and destroying turrets perched on high ground, ready to shred anything that moves into their path. The objective is finding a hidden village that offers the only glimmer of hope, navigating through the ruins, Monkey and Tripitaka must survive, avoiding pools of water mixed with toxic chemicals and numerous mech-humanoids who have taken over the world.

Upon affixing a headband to an unconscious Monkey, a shellfish yet scared Trip enslaves him to ensure her own survival. He must always obey her every command, he can not run too far away and he has to make sure that her heart never stops beating, or the consequence is unthinkable pain.

This delicate relationship is the foundation upon which this great game has been built and it serves as the driving force for your adventure. Having spent a lot of time in pre-production with the intent of being released as a CGI film, Enslaved : Odyssey to the West delivers its players with some superbly produced cutscenes in which these characters interact, grow and begin to feel like real human beings. The studio utilised motion capture in an effort to capture realistic human emotions.

The technology was so advanced that according to Serkis, the actor who plays Monkey, it allowed for better dialogue performances and an immersive experience as the actors were able to become emotionally engaged and delivered better performances.A gamer knows that he is connected to the characters emotionally when only a brief smile from Trip, as she finds herself climbing on the back of monkey’s motorcycle, tells them all that they need to know about her thoughts. The characters emote convincingly, and Enslaved manages to present the gaming community with one of the best facial animations and voice histrionics in the game generation.

The player primarily takes control of Monkey during this adventure. There is a symbiotic relationship between the two characters, one does most of the grunt work and one is his cerebral counterpart. One of the most important aspects of the script was perhaps the characterisation and interaction.

Inspired by the 2001 Playstation 2 game ‘Ico’, the interesting juxtaposition between the two protagonists and the evolution of their relationship as the story progresses, makes Enslaved one of the best games in Ninja Theory’s roster. The gameplay is straightforward like any other action adventure, where you start off with a fixed number of moves, a mix of offence and defence, and unlock more abilities as you progress through the various levels.

The combat is basic and has a sense of brutality, as Monkey swings his staff around, slicing clean through the mechanical monsters. When enemies are defeated they drop tech orbs that can be used to upgrade Monkey’s abilities. Sometimes the camera is zoomed in ultra tight, which makes spotting enemies a difficult task, but also increases the players overall DPS. Most fights can be won with a combination of attacks and dodge/defence moves when the health bar reads critical, and it is only when your enemies become more powerful that the true intensity of the confrontation is revealed.

Trip’s abilities are limited, and the player has the option to command Trip to use her different technical skills like hacking into computers, revealing hazards and project temporary holographic decoys. The on-screen gaming HUD is compelling, presenting gamers with simplistic controls. The developers do a fine job of creating interesting contrasts in the HUD throughout the game. For instance,  the headband the Monkey wears allows him to tap into his vision to see his shield strength, enemy health and mark points of interest.

A lot of Enslaved gameplay revolves around navigating through treacherous platforms and precarious handholds, all the while avoiding spinning blades and dancing flames. The dreamy landscape is a sharp contrast to the brutal combat sequences and it might prove liberating to the gamers, to be able to move through the environment effortlessly. The game manages a steady pace of interesting experiences for approximately 11 hours and builds its characters methodically and organically.

Built on Unreal Engine 3, the eye-catching visuals provide a fantastic backdrop for every section you visit, be that jumping over platforms, navigating through wastelands, solving clever puzzles or riding a hoverboard during exhilarating chases. The interesting juxtaposition between the characters along with its diverse gameplay situations make Enslaved consistently fun and exciting to play.

What Happened to Enslaved : Odyssey 2 the West? 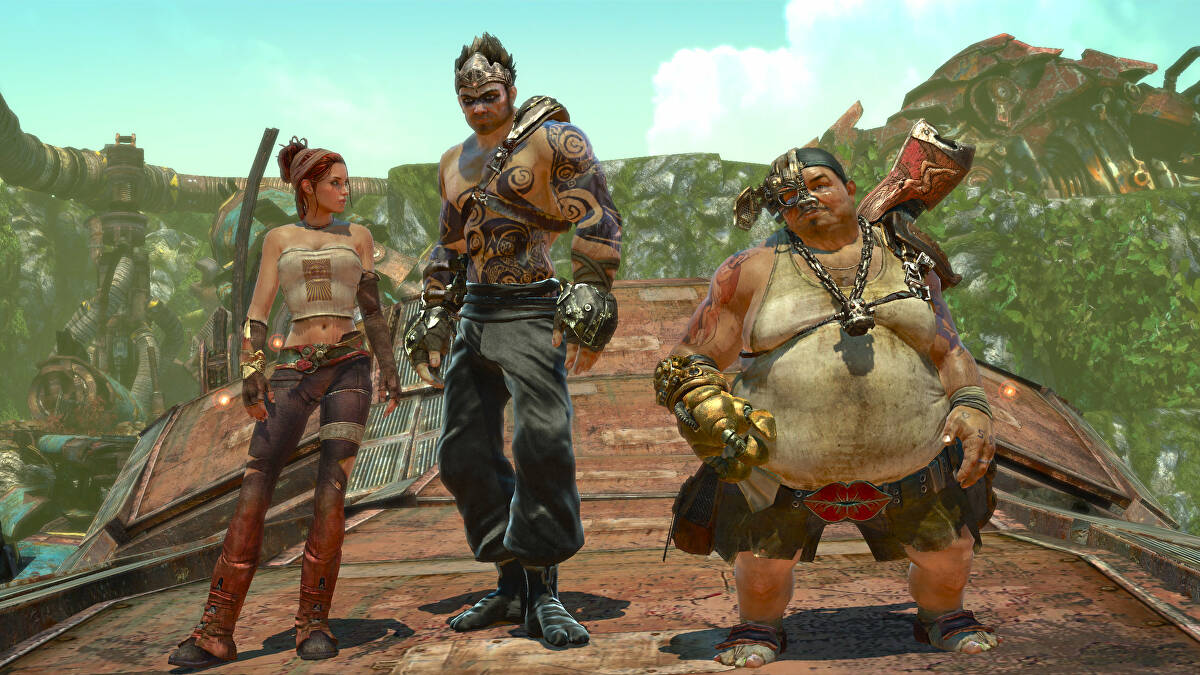 Ninja Theory, known for big names like Heavenly Swords in the past, had high hopes for Enslaved and went all out with the advertising campaign, with numerous ads on the London underground and TV as well as on and offline. But the plans for a sequel the next year was quickly shelved as the game managed to sell only 730,000 copies in the first 8 months of its release. Despite largely positive reviews, including a whooping 8/10 from Eurogamer and a decent metacritic of 81, Enslaved : Odyssey to the West was not quite able to make a mark.

Being based on a very popular novel, it was not like the game was not an instant success amongst the gaming community, but due to issues with its price and longevity, it did not meet the sales targets expected from it. Perhaps certain aspects of the combat seemed too ‘easy’ for gaming veterans and thus, despite having received raving reviews for its strong artistic design, visual storytelling, advanced character animations, and being called ‘the most visually original of the year’, the game was quickly forgotten by the gaming community.

After the release of games like ‘The Last of Us’ within three years, which explored similar character dynamics but were far superior in terms of game development, Enslaved lost out on a lot of its consumer base. Being an old-fashioned single-player story-driven adventure game, released in an era when multiplayer gaming had already begun to become ‘the next big thing’, Enslaved dropped drastically on sales charts with only 75k global sales of the PS3 version.

But did Enslaved : Odyssey to the West really deserve to be forgotten so soon?

Enslaved is not perfect. But it is a fine example of how a gripping story and strong artistic design can easily overcome gameplay problems. Even if the movement and the combat does not live up to its full potential, they seem like minor blemishes on an otherwise holistic experience.

Enslaved : Odyssey to the West keeps its players hooked with incredibly lifelike characters and an eminently satisfying journey, as they get to witness Monkey and Trip grow emotionally as the game progresses. The striking visuals and memorable storytelling makes Enslaved a must buy for every gaming enthusiast. 12 years since its release, Enslaved still remains a beautifully woven tale of two tethered souls who have developed a symbiotic relationship.

The game, forgotten by the majority of the gaming community deserves a special mention for the diversity it presents in its gameplay and its breathtaking story telling. The game ends on a bitter-sweet note with no simple resolution. Trip’s last line as she says “Did I do the right thing?” – After she finally exacts revenge on the creature that decimated all she cared for, is hopeful yet ominous. Enslaved is colourful without being garish; heartfelt without being saccharine; rousing without being witlessly bombastic; the game walks a delicate line of storytelling, gameplay and emotion, all somehow, without ever tumbling into excess.