10 Anime To Watch If You Love Mobile Suit Gundam

Although the popularity of mecha anime has declined, there are still many dedicated fans. Mecha anime that went unnoticed will only be known to the most dedicated.

Mecha content, in which giant robots are piloted to accomplish unbelievable feats, is one of the most popular anime genres. In modern anime, storytelling and animation are on another level, but anime has gained such a large audience since there are so many unique genres that focus on specific subject matters.

The original series, Mobile Suit Gundam, debuted in 1979 and has since spawned multiple universes and timelines composed of dozens of characters, scenarios, and designs. With over thirty original works in animation, live-action, and Manga, Gundam has the most significant catalog of series in the mecha genre.

Like any genre, there are certain totemic mecha titles that are always in the conversation, but the crowded area of entertainment also has its share of hidden gems and overlooked achievements that deserve some love. The world is now faced with a new threat 15 years after a cataclysmic event called the Second Impact: monstrous celestial beings called “Angels” are creeping into Tokyo-3. Despite the most advanced munitions and military tactics, mankind cannot defeat the Angels.

Shinji Ikari, the 14-year-old son of Gendou, returns to Tokyo-3 after years of being abandoned by his father. The loss of his mother and his father’s neglect of him have left Shinji facing a perpetual internal struggle against deep-seated trauma. As Shinji is terrified of opening himself up to another, he is forever changed when he gets to know 29-year-old Misato Katsuragi, a high-ranking NERV officer who shows him a free-spirited maternal kindness he has never experienced before.

In the aftermath of an Angel attack, Shinji must act as Gendou discloses his true reason for calling his son back to Tokyo-3: Shinji is the only child capable of effectively piloting Evangelion Unit-01, a new robot that is synchronized with Shinji’s biometrics. Shinji defends Tokyo-3 against the angelic threat despite the psychological trauma brought about by piloting an Evangelion, blissfully unaware of his father’s dark plots. 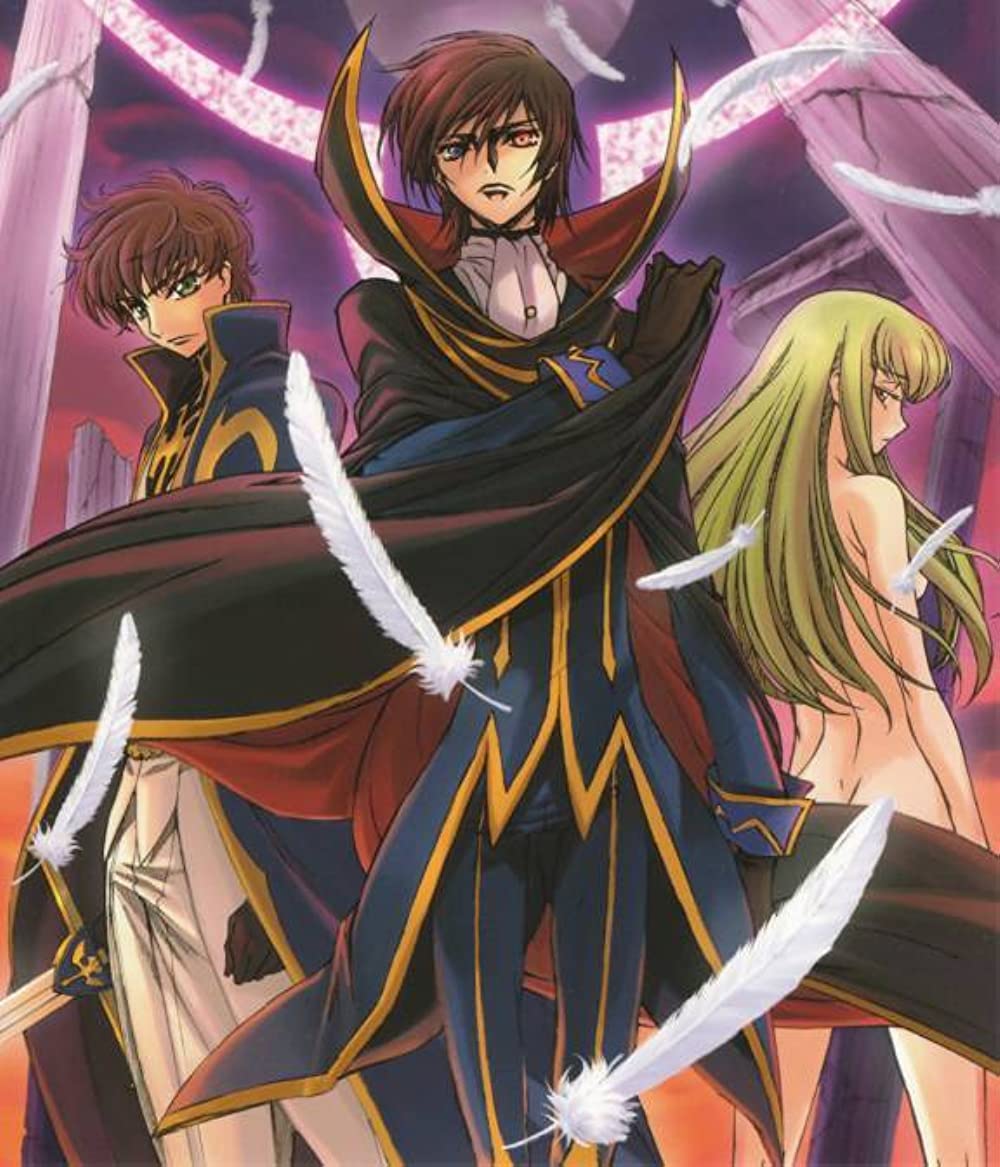 Lelouch Lamperouge is a Britannian student who lives in Area 11, which was formerly known as Japan. The strong Holy Britannian Empire attacked the small island nation in 2010 and deprived it of its identity.

Lelouch investigates the wreckage after witnessing the crash of a military transport plane in the middle of a restricted region. When patrolling British soldiers threaten to execute him for trespassing, his journey is cut short.

Fortunately, he is rescued by the plane’s lone survivor: a mysterious woman named C.C., whom he discovered locked in the plane’s cargo. She bestows to Lelouch the power of Geass, a supernatural ability that requires complete obedience from those who are subjected to it, making his dictates invincible.

Lelouch assumes the identity of revolutionary Zero, armed with incredible power, promising to annihilate the wicked Britannian Empire and those who mistreated him many years before. After 150 years of stalemate between the Galactic Empire and the Free Planets Alliance, a new generation of leaders emerged: the idealistic military genius Reinhard von Lohengramm and Yang Wenli, the FPA’s reserved historian.

While Reinhard rises in the ranks of the Empire with the assistance of his childhood friend, Siegfried Kircheis, he must conquer not only the war but also the remains of the crumbling Goldenbaum Dynasty in an attempt to free his sister from the Kaiser and bring humanity under one genuine ruler.

Yang, on the other hand, a strong supporter of democratic ideals, must stand firm in his beliefs despite the struggles of the FPA and show his pupil, Julian Mintz, that autocracy is not the answer.

While ideologies clash amid the war’s many casualties, the two strategic masterminds must ask themselves why they are fighting. 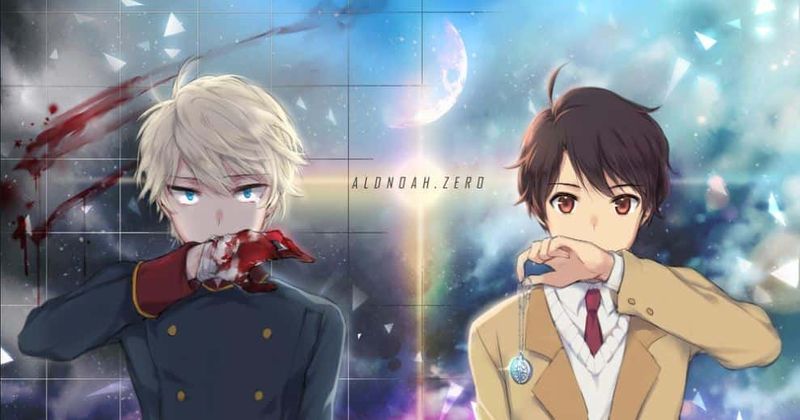 A hypergate discovered on the Moon once allowed the human race to travel to Mars. Those who settled there discovered technology far more advanced than their home planet, which they named “Aldnoah.” This finding led to the establishment of the Vers Empire of Mars and the declaration of war against the “Terrans,” those who stayed behind on Earth.

After a battle on the moon, known as Heaven’s Fall, the hypergate exploded, destroying the moon and resulting in an uneasy ceasefire between the two planets.

However, their peace was fragile. After fifteen years, high school student Inaho Kaizuka witnesses the plotted murder of the Vers Empire’s Princess Asseylum Vers Allusia, who had come to Earth to repair the empire’s relationship with Earth.

As a result, the Martians declare war on the Terrans once again, breaking the ceasefire. As a result, Inaho and his friends now need to fight against the Vers Empire to end the war once and for all. 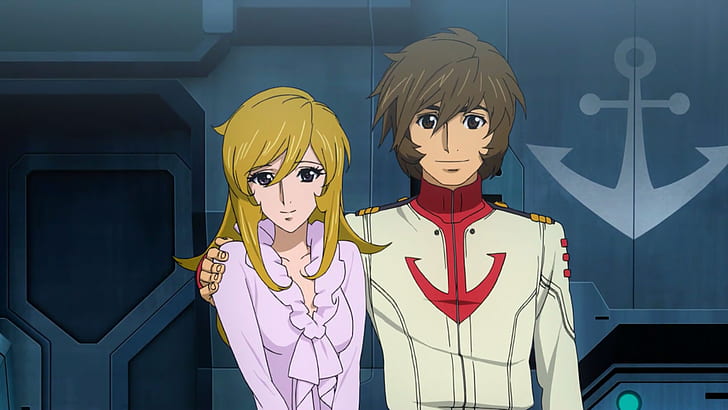 With the constant onslaught of planet bombs from the expansionist Gamilas Empire, Earth’s once green hills and rich blue oceans have become a desolate wasteland. Humankind has retreated to underground cities to escape radiation by 2199.

There is still hope, however, because the distant planet Iscandar offers Earth its final hope: the Cosmo Reverse System, which can restore Earth’s irradiated surface. The Earth Defense Force makes a desperate attempt to retrieve this technology from Iscandar by building the Yamato, a state-of-the-art battleship equipped with an infinite energy Wave Motion Engine.

From young talent such as Tactical Officer Susumu Kodai to accomplished veterans like Captain Juuzou Okita, the Yamato’s crew consists of many individuals, all varying in their experience on the battlefield. But despite their differences, one goal unifies them all: to complete their perilous 168,000 light-year voyage to Iscandar and save humanity from imminent doom. 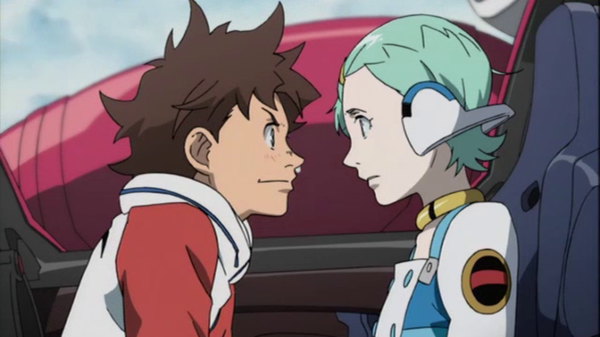 Renton Thurston, 14, lives in the backwater town of Bellforest. It is his desire to leave behind his mundane life and join the mercenary group known as Gekkostate, hoping to find some adventure there.

Although Renton’s grandfather insists he becomes a mechanic like him, as well as the pressure of his deceased father’s legacy, his only source of excitement lies in the activity of riding the Trapar wave particles, which are dispersed throughout the air like an activity similar to surfboarding.

It is all about to change when a mysterious object crashes through Renton’s garage and turns out to be a Light Finding Operation – a robot that can ride on Trapar waves, the Nirvash typeZERO. Eureka, a Gekkostate member, pilots the Nirvash. She requests that the aircraft be tuned up.

The meeting sparks Renton’s involvement with the Gekkostate as he takes off with Eureka as the co-pilot of the Nirvash. 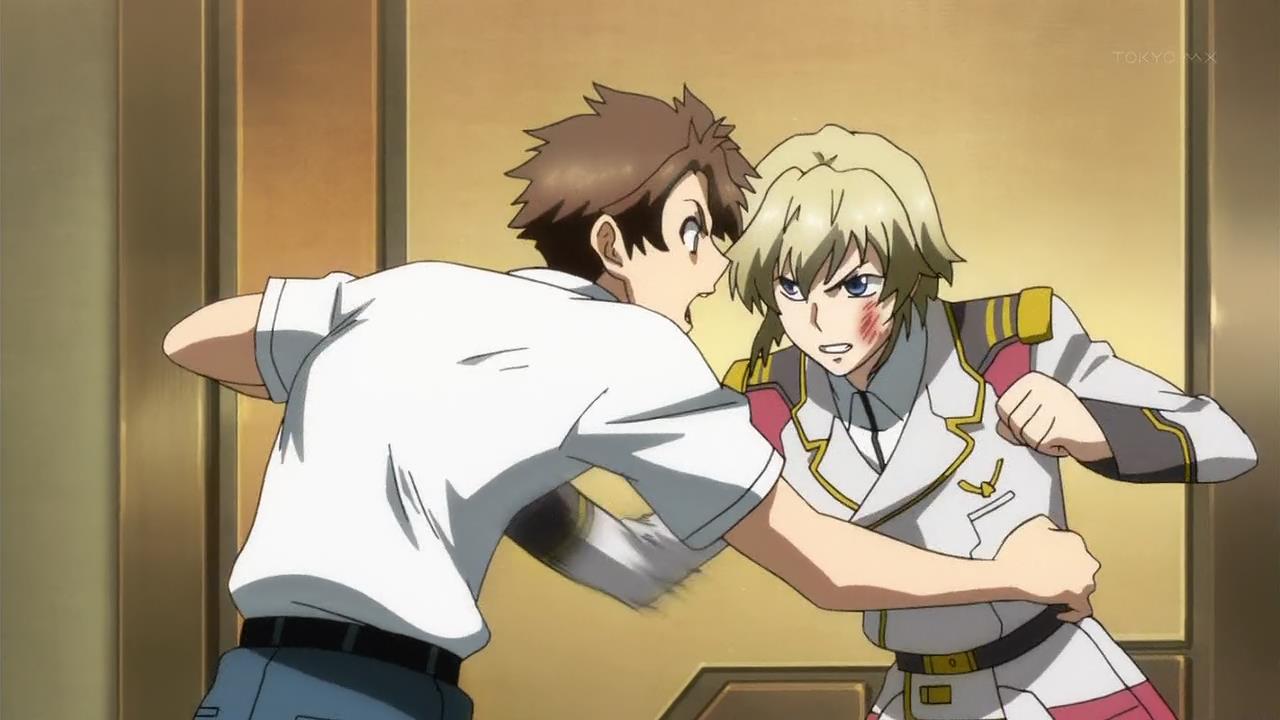 Aoba Watase is saved by his mysterious classmate Hina Yumihara when he is suddenly targeted by a giant robot called a “Valiancer.” Hina reveals that the robot and she are from the future and propels Aoba 70 years forward.

Upon arriving, Aoba finds himself in the cockpit of a Valiancer called “Luxon,” caught up in a firefight between the Free Pact Alliance (FPA) and Zogilia Republic. When he shows high compatibility with an FPA pilot named Dio Weinberg, the two perform a successful “coupling,” sharing experiences and ultimately developing their skills.

Aoba survives the unexpected battle but is taken into custody by the FPA ship Cygnus for interrogation. While the student’s main concern is whether he will ever be able to return home, what he doesn’t realize is that he is about to get caught up in a war to protect the world. 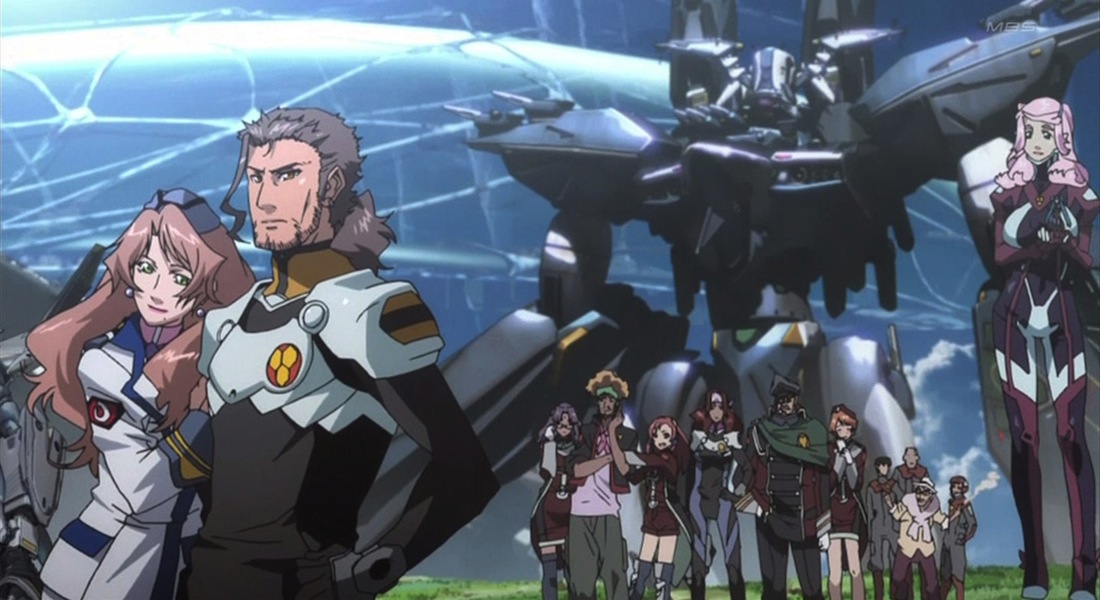 Humanity realizes that they are not alone after a mysterious spaceship crashes into Earth. Considering space a potential threat, nations put aside their nationalistic differences, conflicting interests, and cultural differences, uniting under the United Nations. As a result of the newly formed UN forces, an alien spacecraft named SDF-1 Macross is repurposed.

A number of spaceships belonging to a race of aliens called Zentradi descend upon Earth on the day of its maiden voyage, and the SDF-1 Macross, acting of its own accord, shoots them down, sparking an intergalactic war.

When the Macross tries to launch itself into the Moon’s orbit to escape, it is teleported across space along with the city it was in. Hikaru Ichijou, a free-spirited acrobatic pilot, and Minmay Lynn, an aspiring singer, are both caught up in this mess.

These two, alongside Macross’ crew, experience an epic journey rife with grief and drama, coming face-to-face with the cruelties of war along the way. 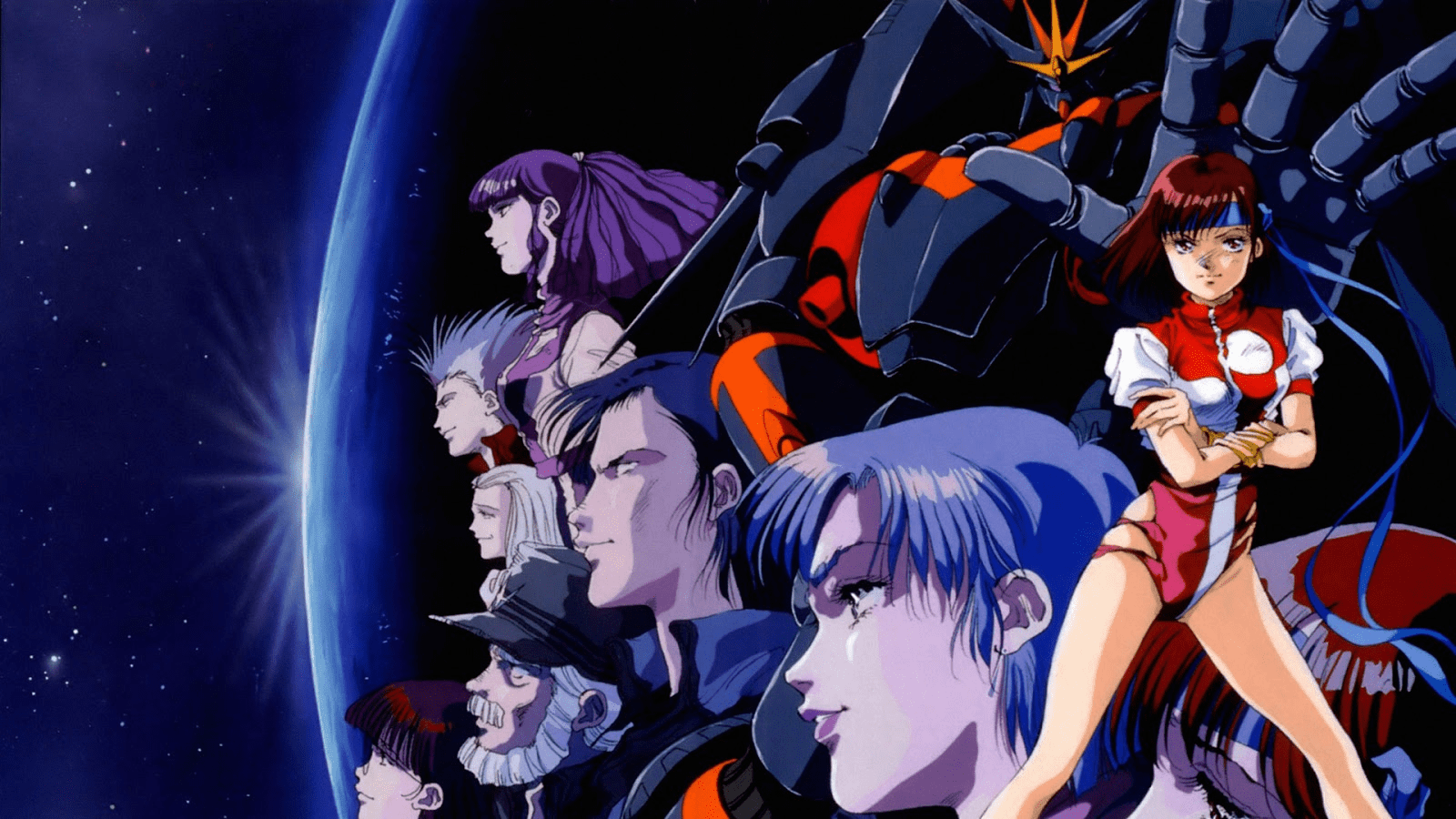 The human race has taken its first steps towards exploring the far reaches of the galaxy in the near future. In doing so, they discover a huge race of insectoid aliens called “Space Monsters.” These aliens seem committed to the eradication of mankind as they near ever closer to discovering Earth. Humanity responds by developing giant fighting robots piloted by hand-picked youth from around the world.

Noriko Takaya, the daughter of a well-known space captain who died, enters a training school despite her questionable skills as a pilot after discovering the aliens. It is there that she meets her polar opposite, the stunning and talented Kazumi Amano, and is forced to work together with her as they attempt to cope with the traumas of war as well as their own emotions.

Throughout the series, we follow Noriko’s development as a character, and her growing resolve to fight is handled better than in any other anime of this kind, relying on both subtlety and moments of sheer emotional power. 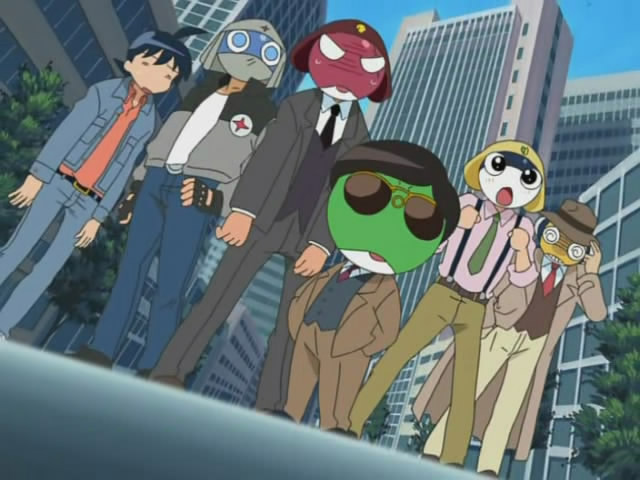 As the residents of planet Earth enjoy a bright, gorgeous sunny day, a young Japanese boy spies a shiny object falling from the sky. Is an alien invasion finally underway?

Keroro, frog leader and sergeant of the Space Invasion Army Special Tactics Platoon of the 58th Planet in the Gamma Planetary System, has found the perfect hideout in Japan. As he attempts to establish a headquarters for his troops to prepare for world dominance, he infiltrates the Hinata house but is thwarted by Fuyuki and Natsumi Hinata.

Natsumi quickly calls them out of hiding, leaving the unfortunate sergeant no option but to disclose his secret identity. Thanks to Fuyuki’s generosity and curiosity, the two siblings soon welcome the sergeant into their home.

The first target area successfully infiltrated by the Sergeant! What if he hasn’t? Get ready to join Keroro Gunsou as he attempts to conquer the world!