10 Anime To Watch If You Love Zombieland Saga

Zombieland Saga is a comedy about idols and zombies, which does make it fairly unusual. However, that doesn’t mean there aren’t great anime like Zombieland Saga, so let’s take a look at the top recommendations.

The dream of Sakura Minamoto is to become an idol. She dies in a sudden traffic accident due to reality hitting her like a truck. Upon waking up in Saga Prefecture ten years later, she finds herself a zombie with no memory of her past. As she deals with her demise, she encounters Koutarou Tatsumi, who explains that he revived her and six other zombie girls from other eras to revitalize Saga economically through an idol group.

Koutarou takes on the role of an abrasive manager, scheduling events; the girls accept, naming their idol group Franchouchou.

Zombieland Saga tells the tale of Franchouchou’s heartwarming struggle to save Saga Prefecture while hiding their zombie identities and rediscovering their past lives in an absurd comic take on the idol genre. While the premise of the show is certainly strange, it’s not half bad for comedic relief! 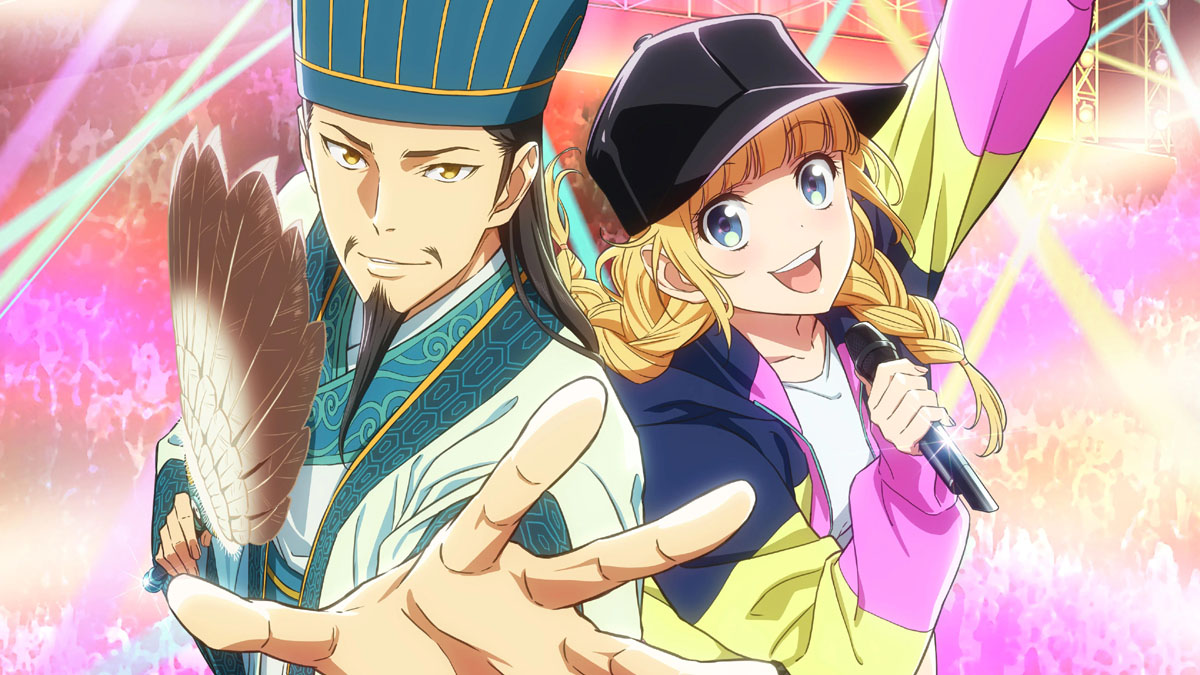 One of the most prominent tacticians of the Three Kingdoms period of third-century China was Zhuge Kongming. After leading his army to countless grueling victories, Kongming falls gravely ill during the Battle of Wuzhang Plains. After the seemingly never-ending war catches up to Kongming, he wishes he could reincarnate in a more peaceful era if he were to reincarnate, as he draws his final breath.

As a result of his wish, Kongming awakes in modern-day Tokyo with a younger body and all his memories intact. He happens upon a nightclub where he comes across aspiring singer Eiko Tsukimi, whose performance immediately captivates him.

After seeing Kongming’s confusion, Eiko takes him under her wing and teaches him about the current world, which stimulates Kongming’s interest in contemporary music. Eiko’s immense musical potential prompts Kongming to take on the role of her manager, vowing to make her famous.

Music industry mistakes, no matter how small, are unforgiving. Kongming is still determined to accomplish his goals-even if he has to use war strategies he used in his previous life! 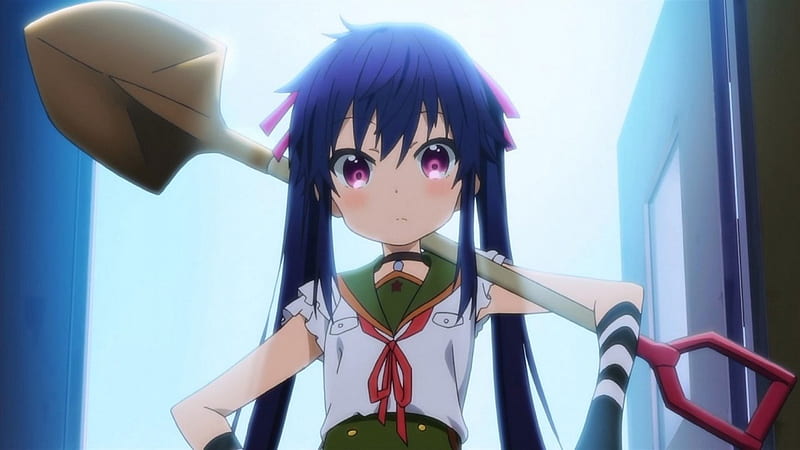 School Living Club is what Yuki Takeya looks forward to every day as a carefree high school junior. With its president Yuuri Wakasa, the active Kurumi Ebisuzawa, the responsible Miki Naoki, the club adviser Megumi Sakura, and the club’s dog Taroumaru, the club makes the best of school life. Among club members, there is only one rule: members must live their entire lives on school grounds.

In Gakkougurashi! we follow the activities of the School Living Club as they encourage independence and autonomy through their lively time residing at Megurigaoka Private High School.

Our main character, Yuki Takeya, is only tethered to sanity by her friends’ willingness to walk on eggshells around her.

With such a fragile PTSD mindset that’s standing at the edge of rational thought—the likes of which could be toppled with the slightest nudge; a great deal of the show’s appeal comes from essentially watching a human ticking time-bomb that could be sent spiraling into madness at any given second. She’s Gurashi’s central focus, and rightfully so. 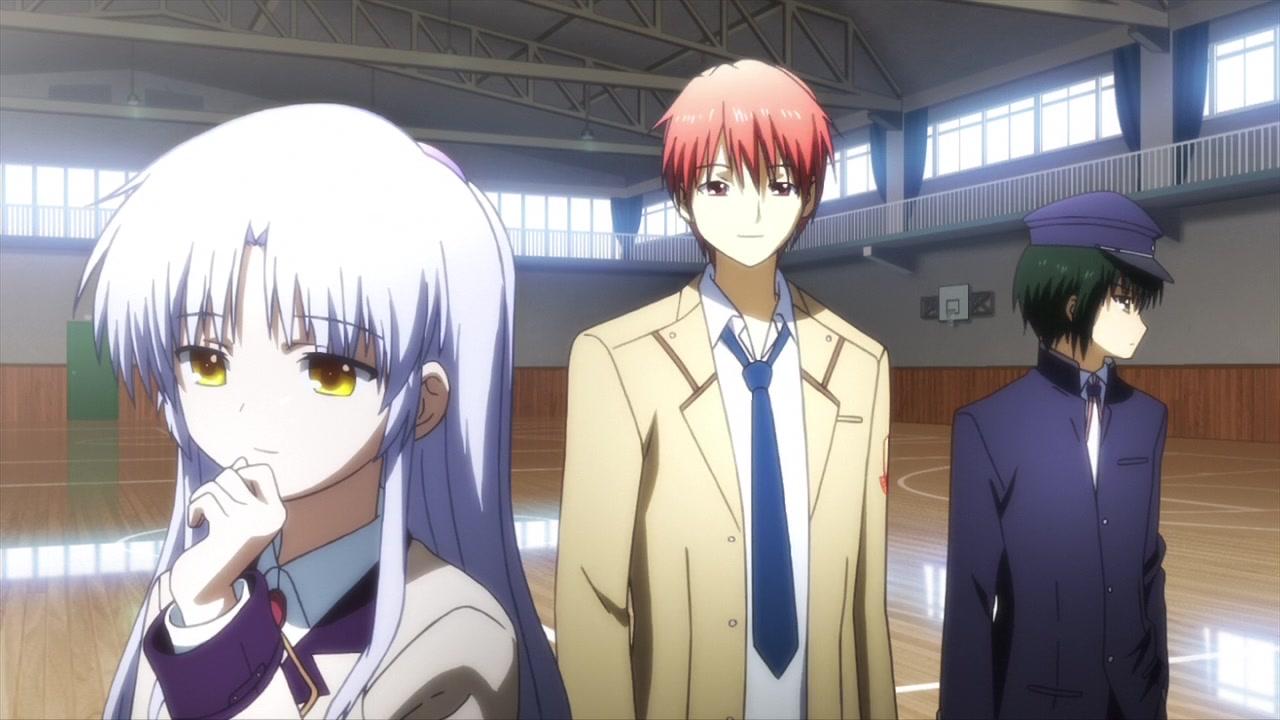 As long as humanity has existed, death has been one of many mysteries. After Yuzuru Otonashi, 17, dies, the burning question of what happens to the soul after death is soon answered. Upon waking up in a dimension between life and death without any memories, he discovers the unsettling truth about the afterlife.

A bizarre dimension designed to shelter those who died unwanted deaths takes the form of a high school. The school’s residents, feeling wronged by God during their earthly lives, have formed the Afterlife Battlefront to oppose their god-like president, Kanade “Angel” Tachibana.

The group’s leader, Yuri Nakamura, recruits Otonashi in their fight against Angel in order to take control of their own lives. However, questioning the morality behind their actions, Otonashi takes a step behind the enemy lines to understand the opposing side of their common fate.

Angel Beats has a duality to it. The comedy part is well-timed and mostly funny. It is also quite good at slapstick comedy and usually accompanied by unfitting music, which further heightens the comedy. 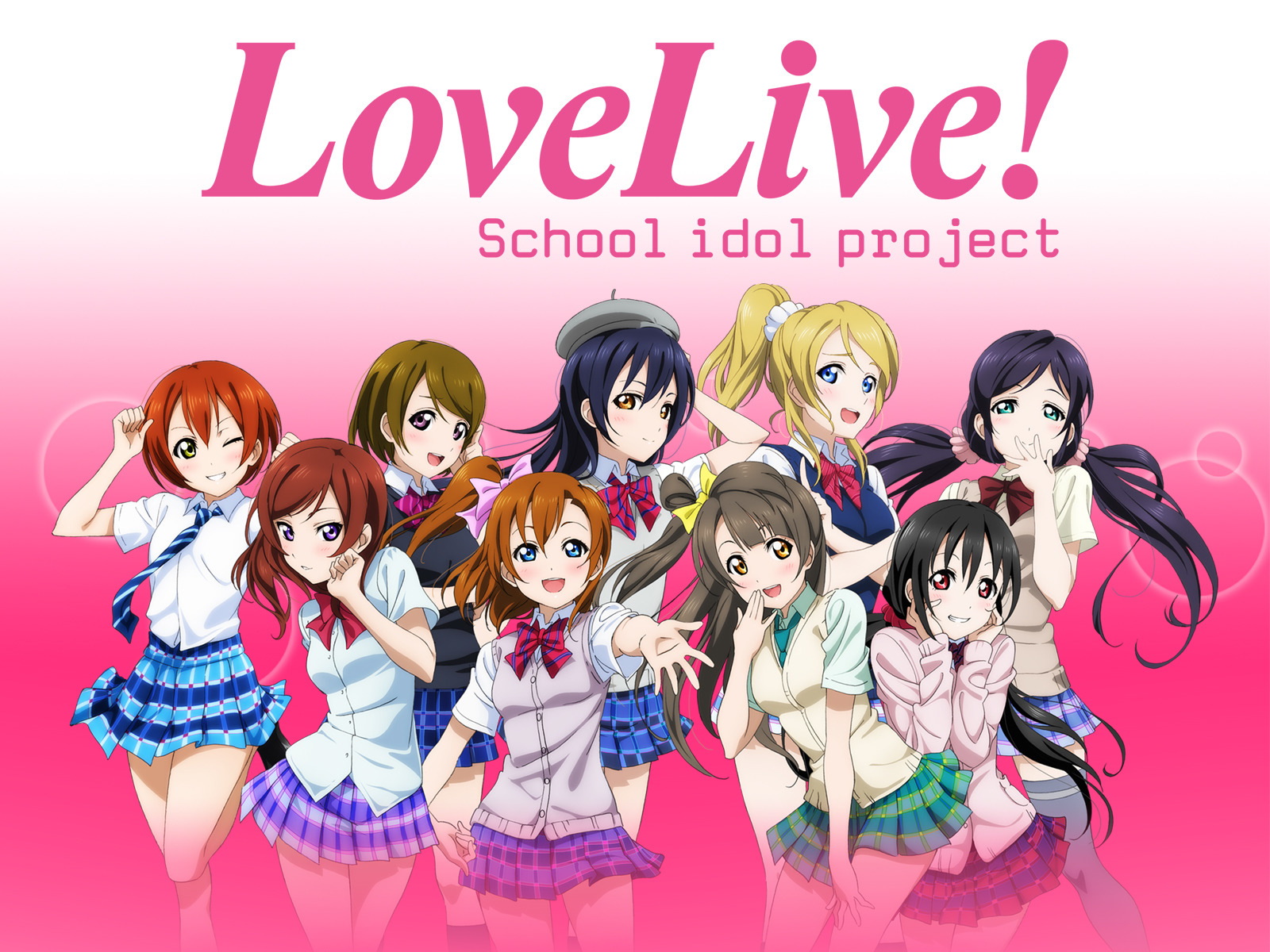 A crisis has hit Otonokizaka High School! As enrollments drop each year, the school is set to shut down after its current first-year students graduate. Second-year Honoka Kousaka, however, does not give up easily.

Her search for a solution leads her to popular school idol group A-RISE and she decides to create her own group. Umi Sonoda and Kotori Minami, two of Honoka’s childhood friends, help her form μ’s (pronounced “muse”) to boost awareness and popularity of her school.

Unfortunately, it’s not that simple. Eri Ayase, the president of the student council, is vehemently against the creation of a school idol group. Moreover, Honoka and her friends have trouble attracting any additional members.

But the Love Live, a competition to determine the best and most beloved school idol groups in Japan, can help them gain the attention they desperately need. With the contest fast approaching, Honoka must act quickly and diligently to try and bring together a school idol group and win the Love Live in order to save Otonokizaka High School. During an investigation of a suspicious house, 16-year-old Ayumu Aikawa is tragically murdered. The young man soon wakes up next to a strange armored girl called Eucliwood Hellscythe. It turns out she is a necromancer who has revived Ayumu, turning him into a zombie!

Ayumu vows to hunt down his killer now that he is immortal. During a search in a cemetery, he meets a boisterous young girl named Haruna, dressed as a magical girl and fighting a bear with a chainsaw.

Haruna tries to erase Ayumu’s memory of her after killing the beast, but he absorbs her magic instead. As a result of losing her powers, Haruna now commands Ayumu to hunt strange creatures known as “Megalo,” monsters that terrorize the human world.

Kore wa Zombie Desu ka? follows the adventures of the human-turned-zombie Ayumu as he begins his new, ludicrous life. 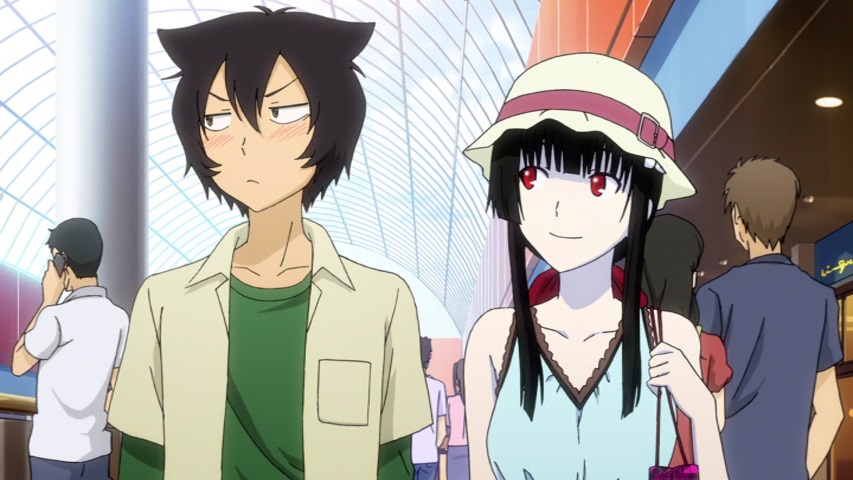 Ever since he was a child, zombie-obsessed Chihiro Furuya has wanted an undead girlfriend. Soon enough, his love for all things zombie comes in handy when his cat Baabu gets run over, prompting Chihiro to try to make a resurrection potion and bring him back to life.

During his endeavor, he sees a rich girl named Rea Sanka yelling into an old well every day about her oppressive life. After meeting and bonding with her, Chihiro is convinced by Rea to persevere in saving Baabu. Eventually, he succeeds with the help of the poisonous hydrangea flowers from Rea’s family garden.

Unaware of the potion’s success and seeking to escape the burdens of her life, Rea drinks the resurrection potion, mistakenly thinking she will die. Though it doesn’t kill her, the effects still linger, and her death from a fatal accident causes her to be reborn as a zombie. With help from Chihiro, Rea strives to adjust to her new—albeit undead—life.

For a boy wanting a zombie girlfriend, this situation would seem like a dream come true. But in Sankarea, Chihiro’s life becomes stranger than usual as he deals with Rea’s odd new cravings and the unforeseen consequences of her transformation. 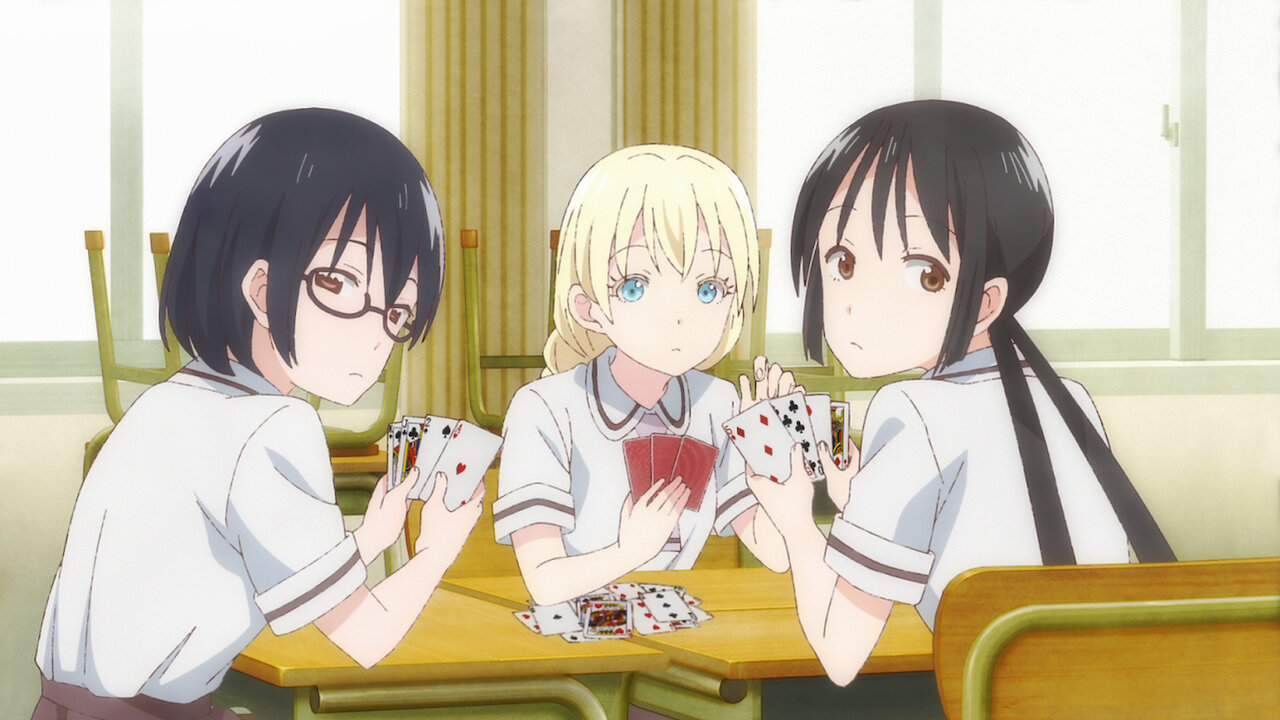 Olivia, a foreign transfer student who doesn’t speak English, and Hanako Honda, a loudmouthed airhead, play “look-the-other-way” during recess. The rowdiness of their behavior enrages Kasumi Nomura, who is taunted constantly by her older sister for losing games.

As Kasumi does not want to compete, she declines Olivia’s invitation, but eventually gets involved and gets her own way. It does not take long for a strange friendship to blossom between the odd trio, and they decide to form the “Pastime Club,” where they can continue their daily mischief.

Asobi Asobase girls never cease to make school life hilarious when they are up to their hilarious antics, whether they are failing to learn English, trying to become popular, or getting caught by teachers at the wrong time.

The core of Asobi Asobase is not the story itself, but rather the characters with their distinct personalities. Asobi Asobase is a wholesome experience not to be missed; its God-tier levels of trickery will mock you hard and bad if you’re not prepared for what lies ahead. 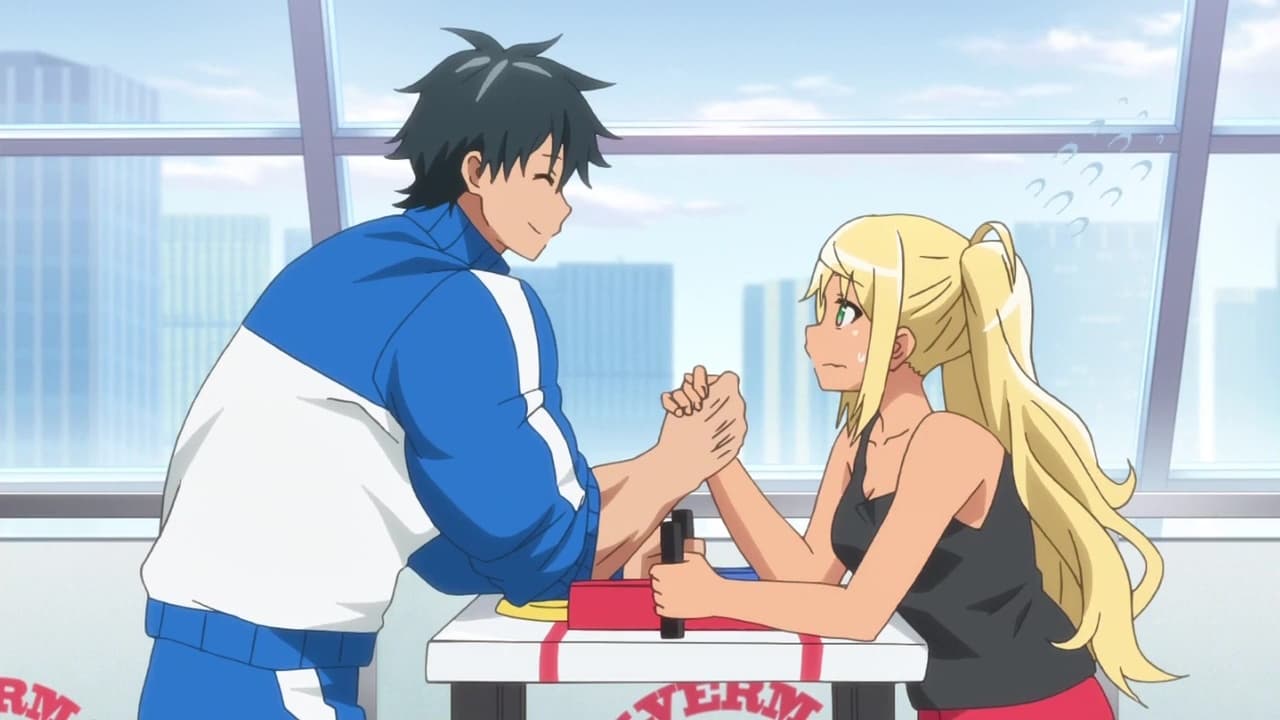 Hibiki, however, finds that she is in for a lot more than she anticipated. It’s not just that Silverman Gym is packed with world-renowned bodybuilders and athletes, but Akemi is also a complete muscle fetishist! As Hibiki watches the scene unfolding in front of her eyes, she starts to leave, but Naruzou Machio, a trainer, gets in the way and stops her.

What the series manages to do with its cast is the impressive part because, with simple character traits, it manages to deliver smooth and hilarious comedy. It’s got a colorful cast of characters who each add their own flair to the show and showcases some really solid comedy. 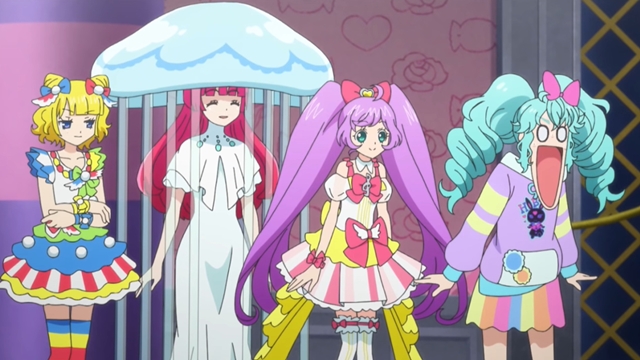 Little girls look forward to receiving their special ticket, one that will allow them to enter the world of PriPara (Prism Paradise). In PriPara, music, fashion, and daily auditions are part of the day-to-day life. Several of Laala Manakfriends and classmates aspire to become idols, but her school prohibits elementary school students from participating.

Fortunately, Laala only watches idol shows. Despite all of this, she manages to bumble her way into the PriPara world and make her debut. All her life, Laala has been told she’s too loud, but now she has found a place where she can sing her heart out.

Additionally, there’s a possibility that she might be the legendary Prism Voice. Adventure, fashion, and music awaits as Laala climbs her way to the top, on her way to become the cutest and most beloved pop idol in the world of PriPara!

New school year means many things, including joining a club. Yui Hirasawa is in a dilemma about which club to join, so she stumbles upon and joins the Light Music Club, which she misunderstands to be about playing simple instruments, such as castanets. Due to her inability to play an instrument, she decides to visit to apologize and quit.

Due to a lack of members, the Light Music Club is in danger of disbanding. As a result, the club members offer Yui anything to convince her to join, from food to slacking off during club time. As a result of her lack of musical experience, Yui insists on leaving. As a last-ditch effort, they play a piece for Yui, which ignites her passion and convinces her to join.

Thereafter, it’s just plain messing around with bits and pieces of practice. There is nothing better than spending time together with members of the Light Music Club!