10 Best Anime To Watch If You Like Spy X Family

The hilariously heartwarming adventures of Anya, Lor, and Loid are impossible to replicate. Still, a few shows come close.

Spy X Family has been hailed as one of the most hyped anime series of the Spring 2022 season. Last year, Spy X Family’s anime adaptation was announced, exciting many manga readers and anime fans alike. As part of the show’s premise, a spy has to assemble a family in order to prevent war from breaking out. Anya’s goofy antics with Loid and Yor as they try to act like a normal family despite their odd professions is heartwarming and hilarious.

So far, the show has been incredibly wholesome, and telepath Anya has won over many viewers. Moreover, the show is being produced by Studio Wit and CloverWorks, two amazing anime studios. Since the show will have 25 episodes, fans of the series will be able to enjoy the show’s action and comedy beyond the current anime season. In spite of that, fans are still in need of other great anime to tide them over.

Considering the popularity of this show, it is no surprise that fans may want more shows like it. Anime fans are lucky to have some fantastic options available to them. A man of extraordinary wealth, Daisuke Kanbe, has been assigned to the Modern Crime Prevention Headquarters as a detective. There he gets partnered with the humane detective Haru Katou, who values justice above all else. They are polar opposites, and their morals constantly clash. As Haru believes that money isn’t everything, he dislikes Daisuke’s use of money to solve cases. To solve the mysteries ahead, however, they will need to combine their efforts.

Episodes start off episodic with the MCs solving individual crimes to ease us into the story; then, it moves onto the main plotline. There is an immediate appeal to Daisuke and the entire theme of Balance Unlimited.

There are a lot of great characters in this series. However, Kato and Daisuke are the show’s real highlights. Despite their opposing views, they have such good chemistry that makes them good partners. One is a regular guy, while the other is a millionaire with a faulty common sense. As a result, they complement each other where the other lacks. After successfully clinching a prized vase for his collection, Yoshifumi Nitta, a yakuza member, is rudely interrupted when a strange capsule suddenly appears and falls on him. When he opens the capsule, he is met by a young, blue-haired girl who has no information about herself other than her name, Hina, and the fact that she holds immense powers. Even worse, if she doesn’t use her powers, she loses control and unleashes an explosion. Nitta is forced to become her caregiver due to no other choice.

Nitta asks Hina for help with a construction deal so she can use her powers freely. During this time, a rival yakuza group is attacking his boss covertly. Nitta’s colleagues later blame him for the incident, much to his shock!

When Nitta is given the task of attacking the rival group in retaliation, he steels himself and arrives at their hideout. Suddenly, Hina steps in and helps him wipe out the entire group. Nitta’s yakuza business might just benefit from Hina’s powers if she doesn’t use them on him first! A strange life begins for this unusual pair. 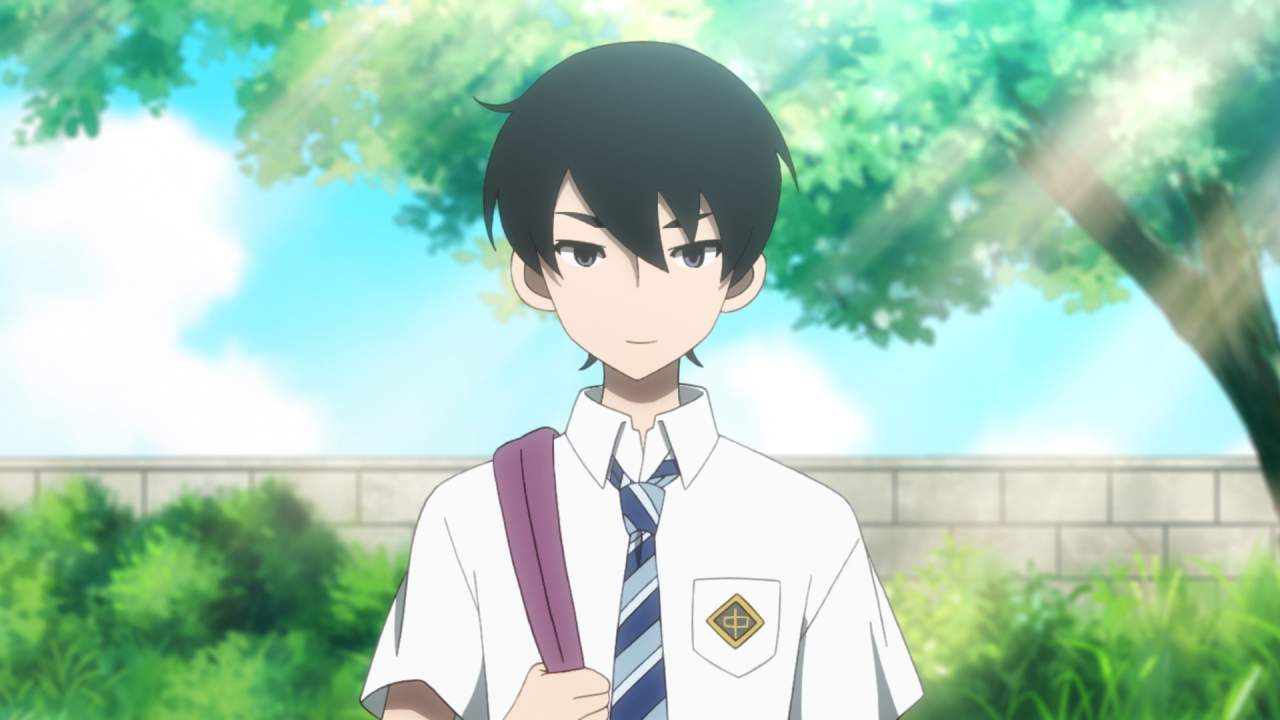 Inappropriate content is known to accompany the works of manga artist Kakushi Gotou. As a result of this raunchiness, when he had his daughter Hime, he vowed not to share his profession with her, as he believed she would be disillusioned.

Kakushi gets into tense situations because of this paranoia-induced belief. Even though he is a single father, he tries his best and often resorts to extreme measures just to protect his secret, such as assuming the identity of a salaryman every morning or holding emergency drills in case she finds her way to his work.

Kakushigoto depicts a father and daughter living side by side, maintaining a peaceful existence despite the father’s efforts to preserve the status quo. Time, however, reveals all secrets. In time, Hime must learn the truth behind the things she took for granted.

Kakushigoto captures the feeling of being a kid to a single parent whose doing everything they can on their own. There’s no guidebook to raising a child. 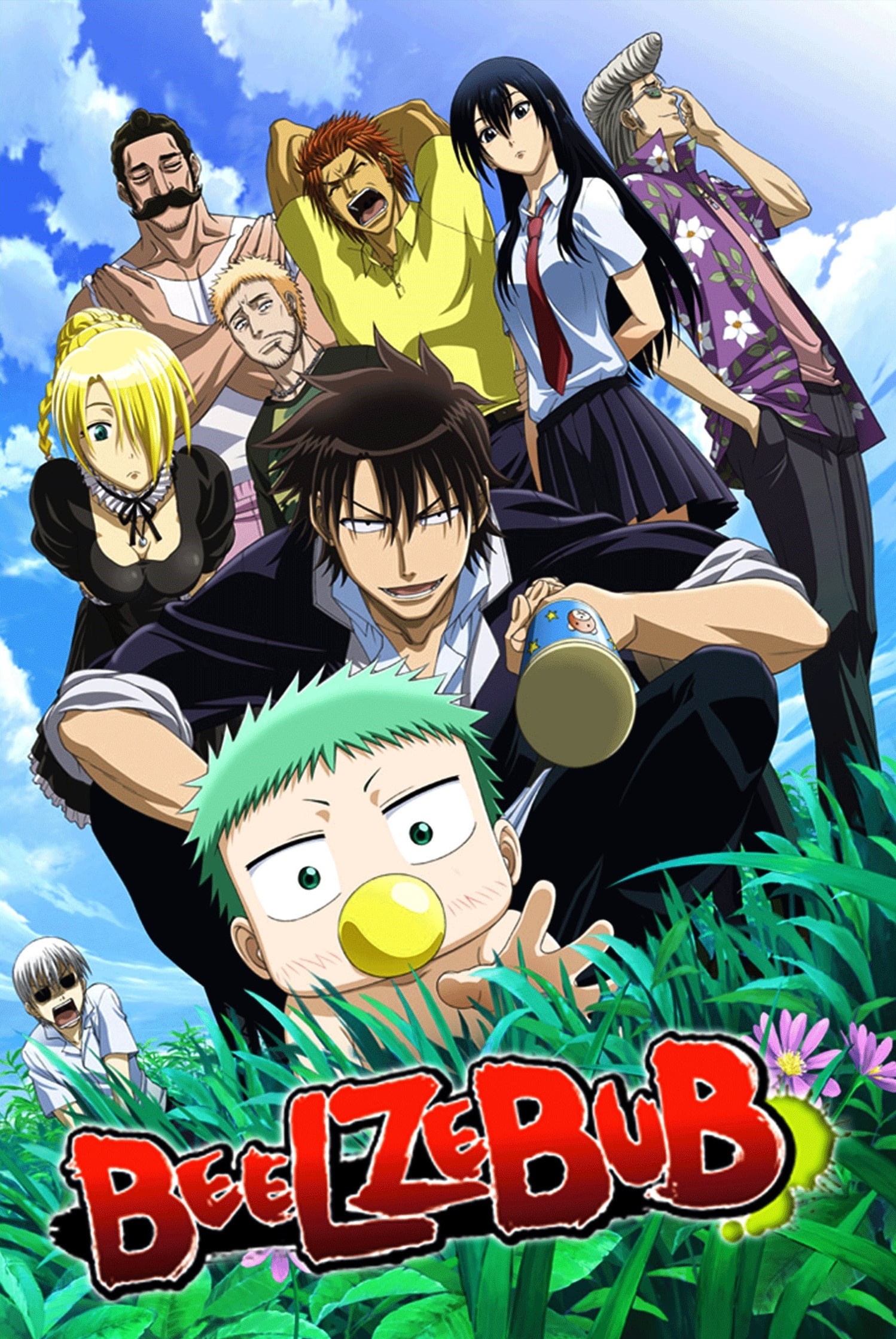 Ishiyama High is a school populated entirely by delinquents, where nonstop violence and lawlessness are the norm. However, there is one universally acknowledged rule—don’t cross first-year student Tatsumi Oga, Ishiyama’s most vicious fighter.

One day, Oga is by a riverbed when he encounters a man floating down the river. After being retrieved by Oga, the man splits down the middle to reveal a baby, which crawls onto Oga’s back and immediately forms an attachment to him. Though he doesn’t know it yet, this baby is named Kaiser de Emperana Beelzebub IV, or “Baby Beel” for short—the son of the Demon Lord!

As if finding the future Lord of the Underworld isn’t enough, Oga is also confronted by Hildegard, Beel’s demon maid. Together they attempt to raise Baby Beel—although surrounded by juvenile delinquents and demonic powers, the two of them may be in for more of a challenge than they can imagine.

The chemistry between the characters is also wonderful—especially between Beelzebub and Oga. 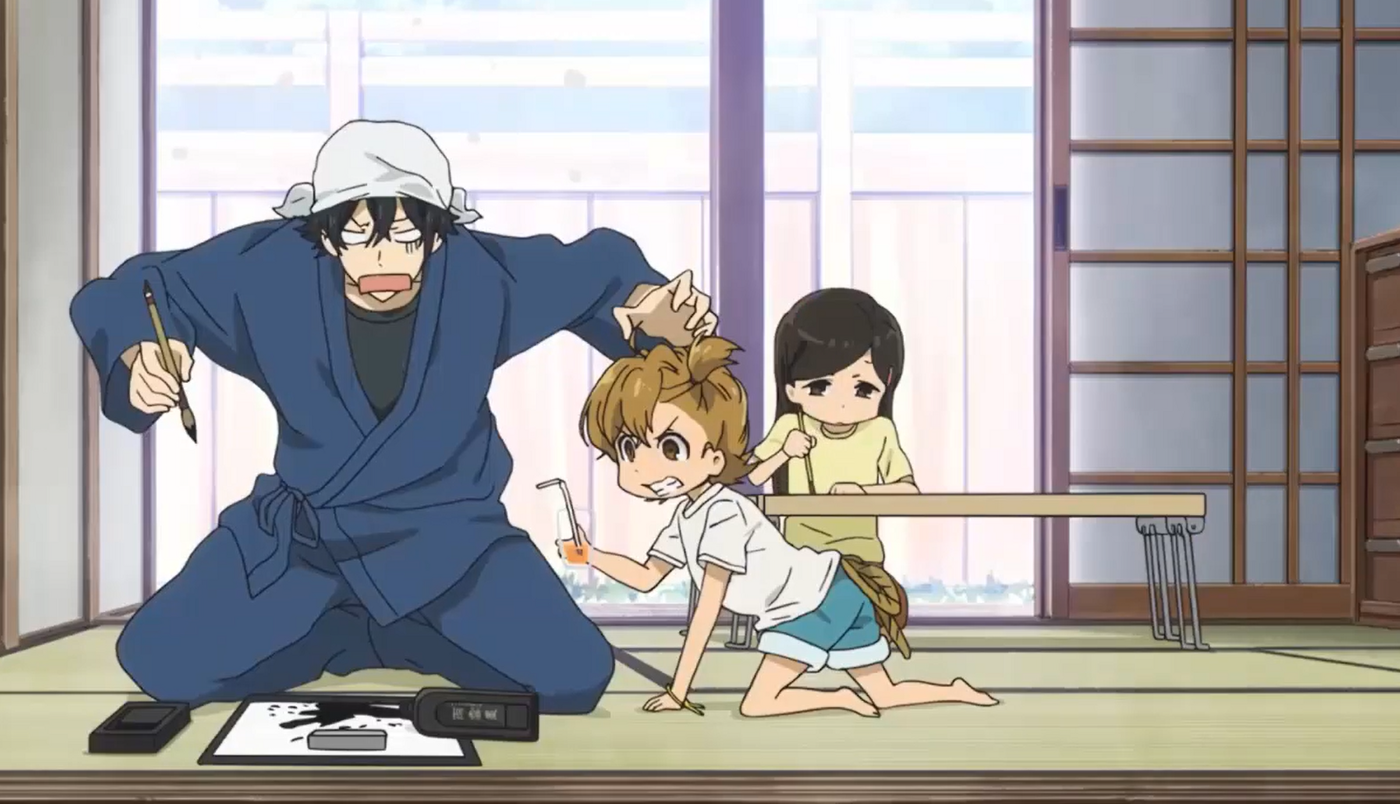 Seishuu’s father banishes him to the Goto Islands, far from the comfortable Tokyo lifestyle he’s used to as punishment and to aid him in self-reflection. Suddenly thrown into a rural setting, Seishuu must find new inspiration and develop his own unique art style-if he can keep the boisterous Naru Kotoishi, fujoshi middle schoolers, and energetic old men out!

In the Goto community, the newest addition only wants to get some work done, but the islands are far from the peaceful countryside he expected. Having to deal with wacky neighbors who are incapable of minding their own business, the arrogant calligrapher learns so much more than he could have ever imagined.

Barakamon shows that you don’t need aliens, magical powers, and love triangles in order to create an exciting anime. 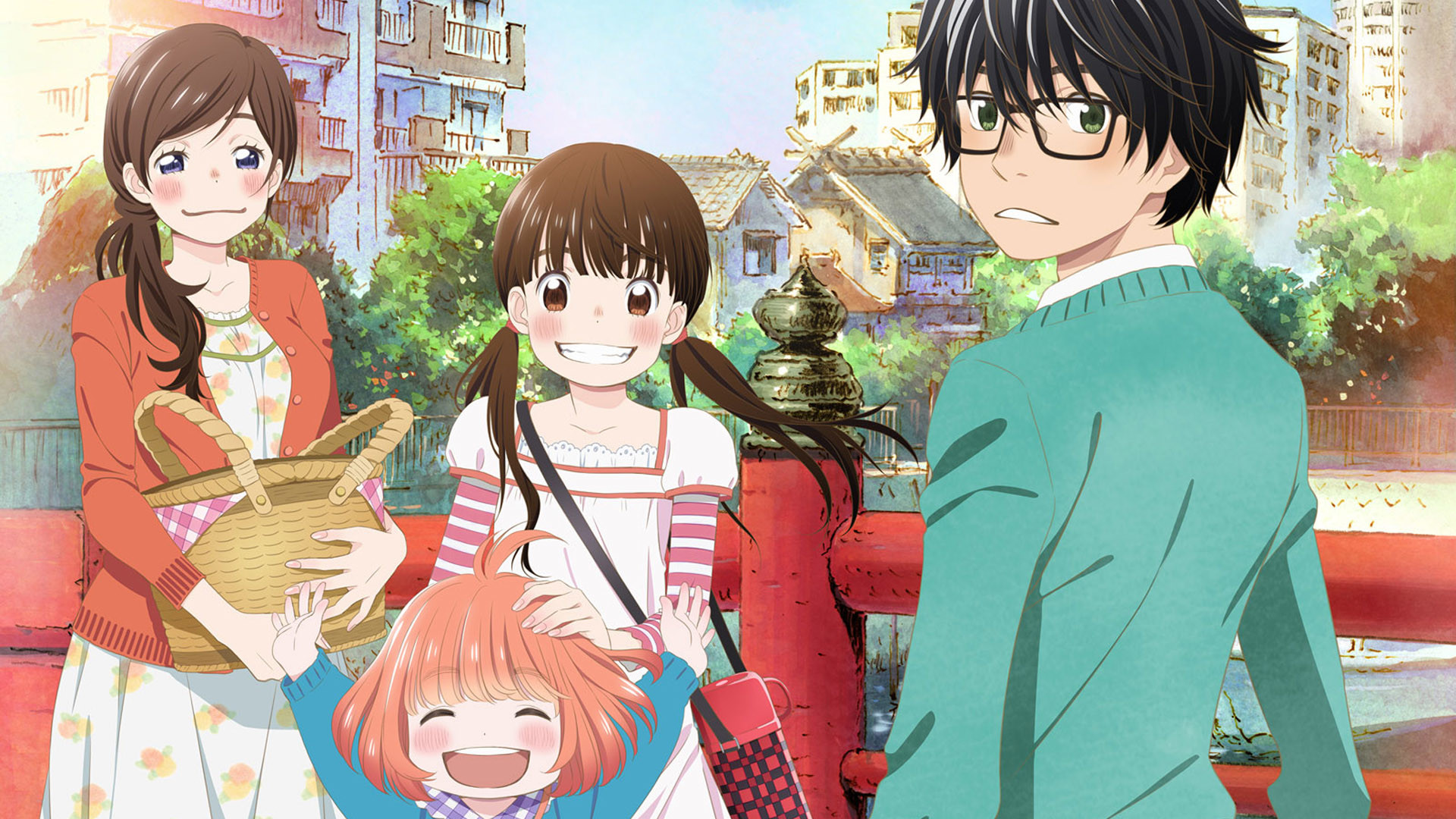 In the world of shogi, Rei Kiriyama is one of the few elites who reached professional status in middle school. The shogi community and his adoptive family put an enormous amount of pressure on him as a result. The young man moves to Tokyo to seek independence from his tense family life. A 17-year-old living on his own, Rei takes poor care of himself, and his reclusive personality makes him feel isolated from his classmates at school and at the shogi hall.

Rei meets Hinata, Akari, and Momo Kawamoto, three sisters living with their grandfather, who owns a traditional wagashi shop, not long after arriving in Tokyo. Akari, the firstborn of the three girls, is committed to alleviate Rei’s loneliness and poorly maintained lifestyle through motherly hospitality.

The Kawamoto sisters, coping with past tragedies, also share with Rei a unique familial bond that he has lacked for most of his life. As he struggles to maintain himself physically and mentally through his shogi career, Rei must learn how to interact with others and understand his own complex emotions. 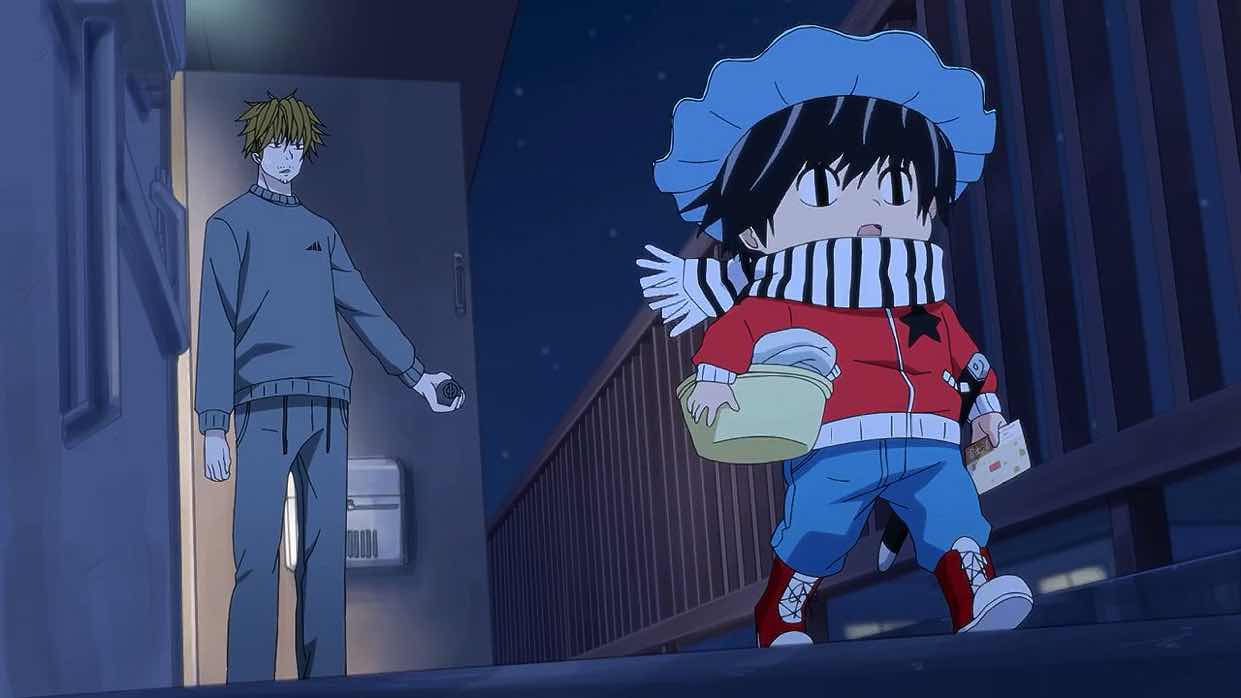 The “apartment comedy with laughs and tears” is the story of a four-year-old boy named Kotarou Satoou, who moves next door to an unsuccessful manga artist named Shin Karino. Kotarou lives alone since he has no parents. He not only seems to be earning a living, but he also seems better put together than his strange neighbors.

As we travel along, we learn more about his circumstances and why he lives alone.

The stories are episodic, similar to 4-koma manga. There is an overarching plot about Kotarou’s past that gets revealed slowly during the course of the show, but the main attraction of this series is definitely the relationships between the characters and the lessons to be learn from every story.

This is a great short series about interpersonal relationships and how children and adults alike can learn from each other. Different lives lead to different perspectives, and we all gain from understanding and communicating with other people. There are good and bad lessons in life. Sometimes, there is no good ending. 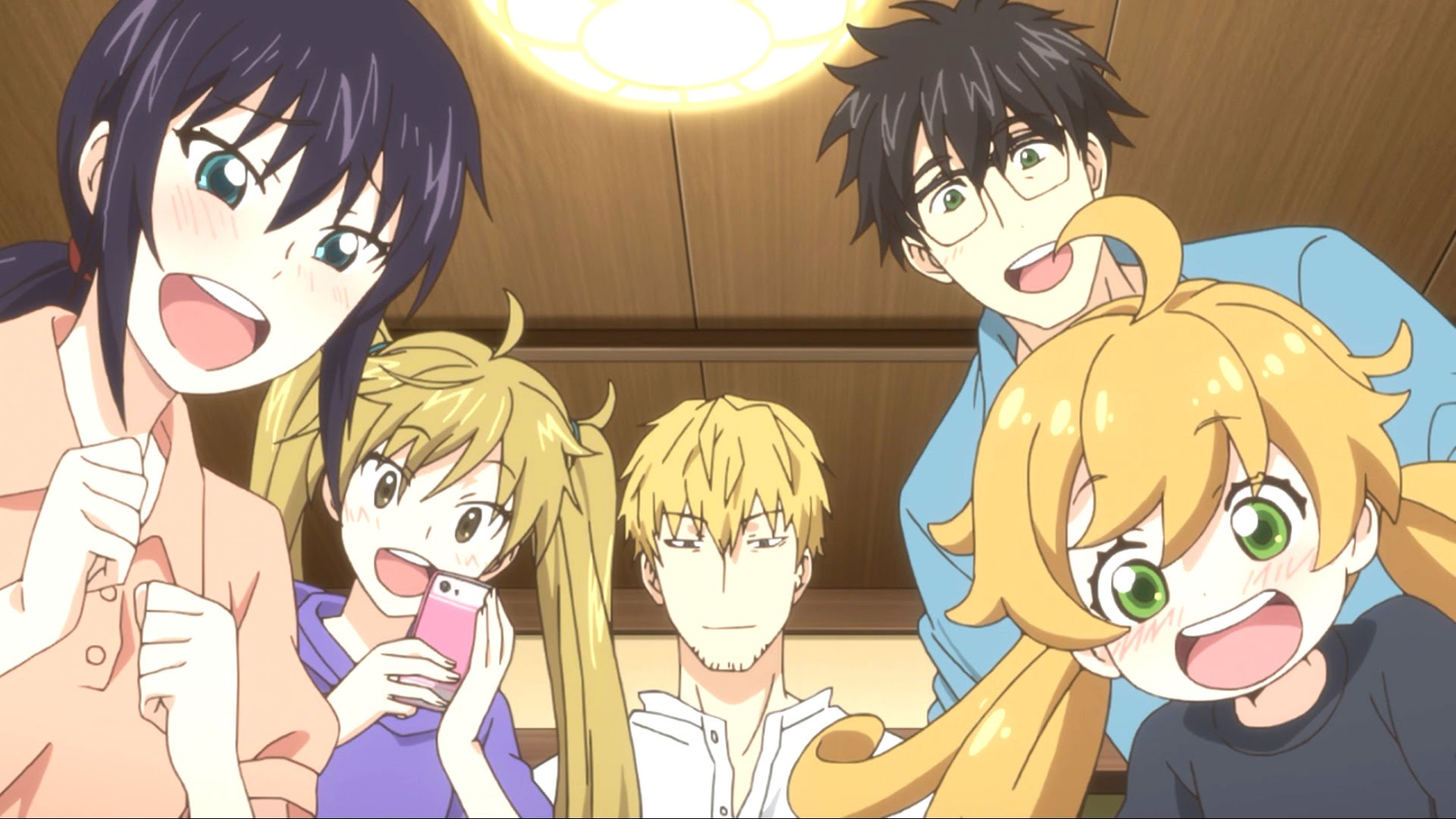 Kouhei Inuzuka has been taking care of his daughter Tsumugi since the death of his wife. Due to his lack of culinary knowledge and busy schedule as a teacher, he relies on premade meals from convenience stores to feed his child.

As Kouhei grows increasingly frustrated with his inability to provide a nutritious, fresh meal for his daughter, he agrees to dine at the family restaurant of his student, Kotori Iida.

The father and daughter discover on their very first visit that the restaurant is often closed because Kotori’s mother is away for work. After much insistence from his pupil, Kouhei agrees to continue to go to the restaurant with Tsumugi to make and share delicious homemade food with Kotori.

In this heartwarming story, the father tries his best to make his adorable daughter happy while exploring the meanings and values behind cooking, family, and the warm home meals that are often taken for granted. 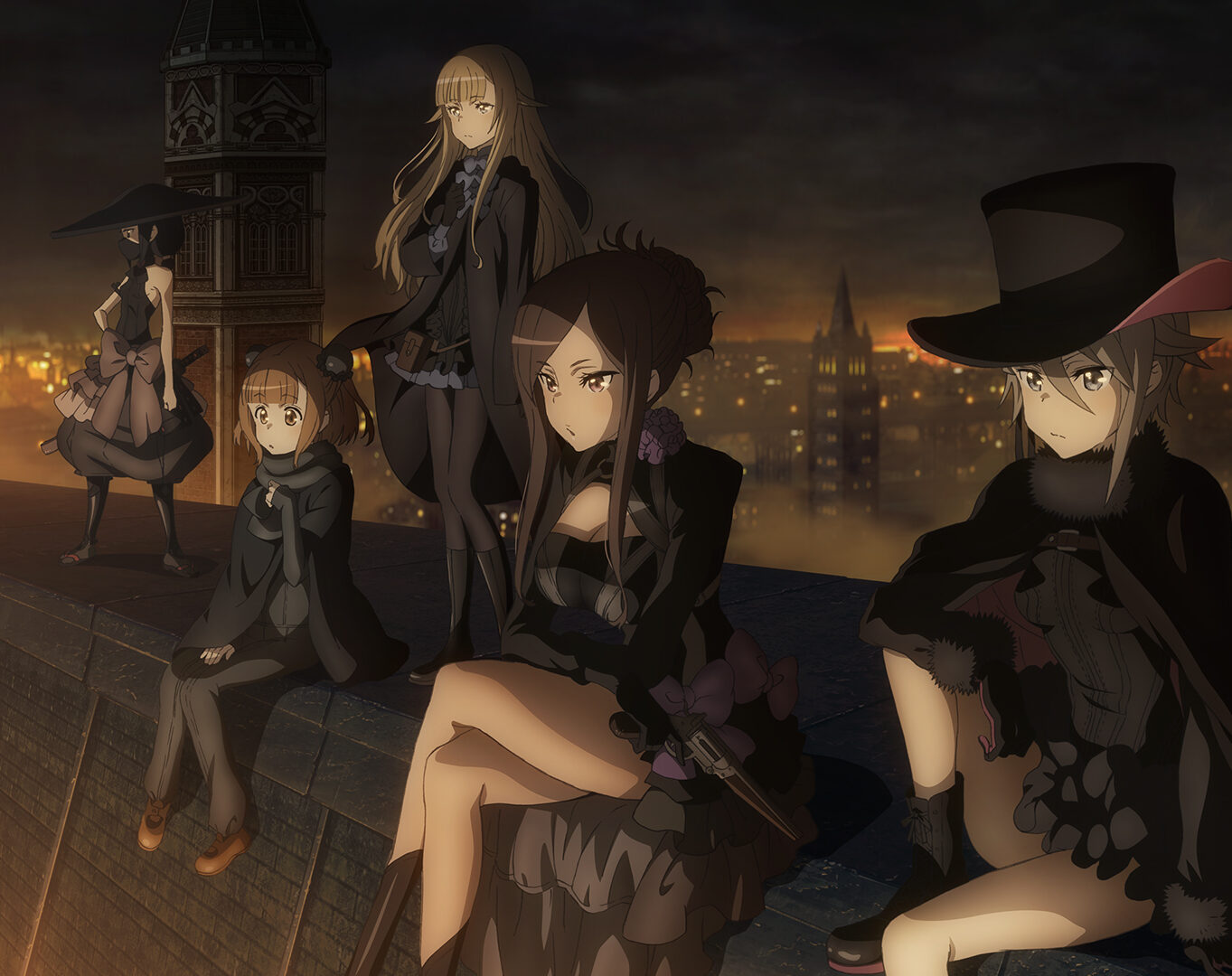 Cavorite, discovered in the early 20th century, allowed advanced military technology to be developed and steered the country toward conflict. London is now partitioned by a wall, and the Kingdom and the Commonwealth of Albion fight a silent war in which espionage is the only weapon that can destabilize the enemy. In the Commonwealth, a group of girls from Queen’s Mayfaire school work as undercover spies.

The group is led by Dorothy, an experienced driver with a striking personality, and it includes Ange le Carré, a cold-blooded liar who is an expert sharpshooter; Chise, a highly skilled samurai; and Beatrice, a voice-mimicking specialist.

To survive in a world filled with conspiracy, mystery, and infiltration, they use their unique individual skills. In the shadow of the war, they have only one goal in mind: completing their mission.

This is not your mindless entertainment, but not the kind that requires constant deep thinking either. All of the elements are of such high caliber and come together so effortlessly that part of the enjoyment comes from the appreciation of what they’re doing both separately and together. 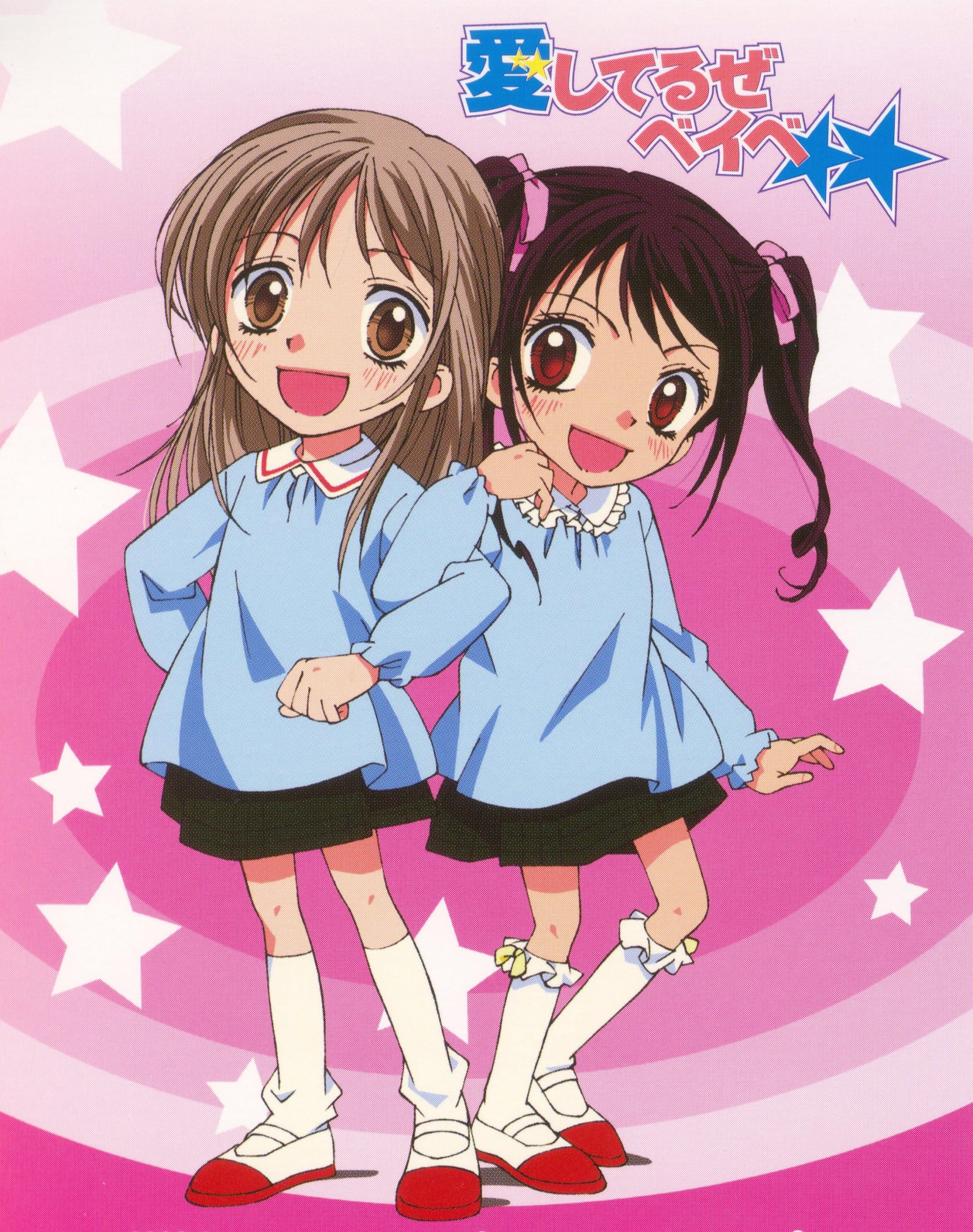 In every way, Katakura Kippei is a high school playboy. The last thing on his mind is responsibility, as he spends his days flirting with any female he can find. His life takes an unexpected turn as one day; he returns home to find his 5-year-old cousin in need of full-time care.

Kippei’s aunt Miyako had disappeared, appearing to have abandoned his cousin, Yuzuyu. With Kippei’s lack of responsibility and knowledge of childcare and Yuzuyu’s injured heart with the disappearance of her mother, their time together is in for a bumpy ride.

Like many other anime, each episode will feature a story that will thrust the main character, Kippie, into a situation where he has to broaden his horizons. These situations are things that could happen in real life and reach out to the viewer.

From the very beginning, it is clear how the story is meant to unfold, and it does just that. A touching story that captures your heart from the first time you see Yuzuyu until long after you’ve finished the anime.