Even if the summer movie season is currently in full swing, it’s never too early to anticipate the next autumn movie season and get pumped about the probable Oscar contenders. The movie Blonde from Netflix and filmmaker Andrew Dominik, featuring Ana de Armas as the legendary actress Marilyn Monroe, is arguably the most exciting release of this year.

This forthcoming biopic has a number of fascinating aspects, such as its NC-17 rating. But now that the movie has a new teaser trailer, we can see de Armas for the first time in this perhaps career-defining role.

Blonde, the biopic that fictionalises the life and career of legendary actress, singer, and model Marilyn Monroe, has at last received a teaser trailer. In it, Ana de Armas can be seen flashing an open smile that is uncannily similar to that of the famous sex symbol from the 1950s and 1960s.

Andrew Dominik, known for movies like the neo-noir Killing Them Softly, wrote and directed Blonde, which is based on the best-selling historical novel by Joyce Carol Oates. The filmmaker was astonished by the film’s NC-17 rating. It will portray a fictitious account of Monroe’s life, which Oates herself has previously endorsed and applauded on Twitter. The movie will take place during Monroe’s heyday in the 1950s and 1960s, paying particular attention to her inner life and worldview. The Australian director, who was born in New Zealand, has been in discussions about this project since the early 2010s, so it has been a long time coming.

Despite not being the first option, Cuban actress de Armas will play Monroe in the starring role. Throughout the course of the film’s development, Jessica Chastain and Naomi Watts were slated to play the major roles. Other actors in the cast include Oscar winner (who is likely referring to writer Arthur Miller) as the Playwright, Bobby Cannavale (who plays the Ex-Athlete), Joe DiMaggio (a former spouse of Marilyn Monroe), and Caspar Phillipson (who plays President John F. Kennedy). Plan B Entertainment, Brad Pitt’s production business, is in charge of making the movie.

The trailer, which is in black and white, opens with Marilyn sobbing in front of a vanity mirror and concludes with her flashing one of the brightest grins we have come to identify with the Hollywood icon. This captures in a little more than a minute the dichotomy of Monroe’s life, the agony she endured in private, and the almost dazzling smiles of her public image. The brief teaser trailer also includes a portion of the famous scene with the white dress in colour, in contrast to the black and white. A slowed-down and almost creepy rendition of “Diamonds are a Girl’s Best Friend” plays throughout the clip, adding to the ominous undertone that is already apparent from the trailer.

The four photos de Armas uploaded on her Instagram account recreated many of Monroe’s most well-known scenes. The “Diamonds Are a Girl’s Best Friend” scene from the 1953 musical Gentlemen Prefer Blondes, in which de Armas is wearing the iconic pink outfit from the movie, is one of these fantastic new photos. These pictures also feature what is maybe the most well-known picture in Hollywood history. The final image de Armas uploaded shows her reenacting the classic scene from The Seven Year Itch from 1955 in which Marilyn Monroe is seen atop a subway train.

“Andrew’s objectives were quite apparent from the outset – to offer a version of Marilyn Monroe’s life through her lens,” the actress said in the description of her picture, which lauded the movie and Dominik. He wanted everyone to understand what it was really like to be Norma Jeane as well as Marilyn, she said. That was the most audacious, unabashed, and feminist interpretation of her narrative I had ever seen.

This passage appeared as part of a longer piece on Netflix Queue in which Dominik discussed discovering Monroe’s humanity and her profound pain as a result of having to live her life in two parts. Her personal life compared to her public life, where she is regarded as a national treasure by her supporters. Some of the photographs, like the one where de Armas’ Monroe is attempting to get through a mob with a troubled expression on her face and her arm around a police officer, show that struggle.

Blonde, like the Joyce Carol Oates novel on which it is based, will not romanticise Monroe’s life in the way that most contemporary biopics do. As the movie carefully recreates the actress’ most famous performances, we will witness Monroe at the height of her influence, but we will also see the unvarnished in-between moments. The NC-17 designation is intriguing because of this, but Dominik has focused on the challenging topics connected to Monroe’s experience. The human cost of the Hollywood industry, the power and dangers of female sexuality, and the lifetime effects of childhood trauma, as stated by Netflix Queue, “demanded an unvarnished approach.”

It is not an easy assignment to recreate the life of movie diva Marilyn Monroe, but it appears that director Andrew Dominik has accomplished. The forthcoming film Blonde, featuring Ana de Armas as the actress, has been watched by American novelist Joyce Carol Oates, who has praised both for how they have captured the life of the renowned Monroe.

Based on Oates’ best-selling 2000 novel of the same name, Blonde explores Monroe’s sadly brief life and the price of celebrity. The author, who stated that she had already watched the movie at the Neuchâtel International Fantastic Film Festival in Switzerland, believes that director Andrew Dominik “succeeded” in accurately portraying Monroe’s life: “Andrew Dominik is a really great director. Instead of viewing it from the outside, from the standpoint of a guy looking at a woman, I believe he was successful in portraying Norma Jeane Baker’s experience from her point of view. He really absorbed her viewpoint.

Ana De Armas, the great actress who portrays her, I think it took her like four hours of makeup, said Oates of De Armas’ outstanding performance. Consequently, they aren’t actually there when you see them on television. It’s like a great vision, but to live off of it requires a lot of suffering.

Monroe, a sex icon in the 1950s and 1960s, lost her sense of self as a result of the appalling exploitation the film business brought her, treating her like a commodity rather than the person she is. Oates wrote in her novel:

She achieved worldwide popularity, but that is not a reputation that can be maintained. A lot of money was made for many guys by this person, but not much for herself. She didn’t have enough money to pay for a suitable burial when she passed away at age 36. As Marilyn grew older, she continued to be cast in these parts often reserved for youthful stars, which made her feel ashamed. You can’t keep acting like this stupid blonde who is getting close to 40. Some claim that she killed herself. I may not always have that opinion. She may have passed away from profound sadness, in my opinion.

Although the similarity between de Armas and Monroe in the teaser and these new photos is simply uncanny, a picture truly is worth a thousand words, as the proverbial saying goes. The photographs’ omissions say volumes and give away a lot more personal and sinister tale than what moviegoers are used to witnessing with this iconic actress.

Blonde, directed by Mindhunter and The Assassination of Jesse James by the Coward Robert Ford director Andrew Dominik, is perhaps one of the most eagerly awaited movies of 2022. Blonde, an adaptation of Marilyn Monroe’s life starring Ana de Armas, has been Dominik’s passion project for years. He first drafted the script back in 2008.

According to Joyce Carol Oates, whose book of the same name served as the inspiration for Blonde, she has seen a rough cut and has called it “startling, brilliant,” “very disturbing,” and “an utterly ‘feminist’ interpretation.” She also said that no male director has likely ever accomplished anything like this. Blonde will undoubtedly be a movie not to miss when it debuts on Netflix later this year thanks to great acclaim from the book’s author and a cast that includes Adrien Brody as Arthur Miller and Bobby Cannavale as Joe DiMaggio.

Dominik recently spoke with Collider’s Steven Weintraub about the movie he’s been working on for more than a decade, when viewers will probably see it for the first time, what the movie is about, how it deals with Marilyn Monroe’s legacy, and how Blonde will compare to Dominik’s other movies.

Dominik said that Blonde’s production was completed in July 2021 and that it has been finished for some time. I suppose it might have gone to Venice last year, Dominik replied. It may have emerged in an autumn crop last year, but cutting it required some time. It takes a bit to trim all of my movies. Blonde didn’t get it to Venice last year, but Dominik hopes to see it there this time around: “The plan is it goes to Venice now, so what’s that, September?”

As Dominik says, “Netflix are letting me distribute the movie I wanted to produce, and even with the NC-17 rating, I think it’s fairly fantastic,” thankfully, that version will be precisely what he wants to watch. Given that Dominik also discussed his unfinished “better version” of The Assassination of Jesse James by the Coward Robert Ford with Collider, it’s fantastic that Netflix is letting him release the movie he wants.

Blonde is a movie for all the unwanted kids in the world, Dominik explained when asked what it is. It seems like Raging Bull and Citizen Kane had a daughter. Blonde’s overall goal was to depict a childhood drama and then demonstrate how that drama divides adults into a public and private personality, according to Dominik, who went on to say: And how the adult perceives the world through the prism of that childhood drama; it’s sort of a narrative about a person whose conscious mind is taking over her rational view of the world; it makes use of Marilyn Monroe imagery.

This summer, Blonde will have its Venice Film Festival premiere before going live on Netflix on September 23, 2022. 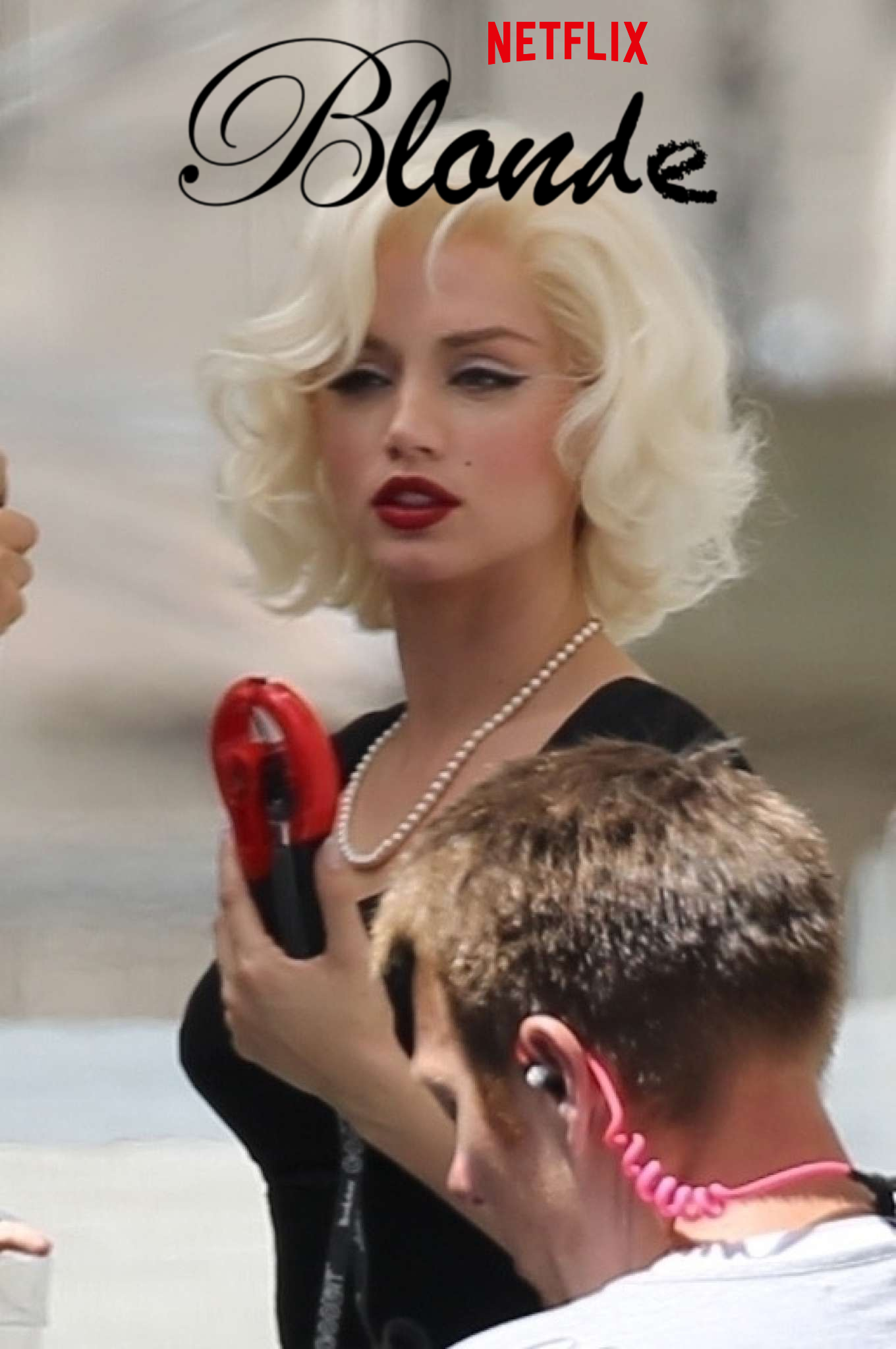 Blonde (2022) will be premiering on Netflix on September 23, 2022. We do not recommend illegal streaming and always suggest paying for the content you like to watch.

Amazon prime will not be streaming Blonde (2022). Additionally, several other films are streaming on Prime. Our recommendations are The Voyagers, It’s a Wonderful Life, Notting Hill, and Eternal Sunshine of the Spotless Mind.

HBO Max will not be streaming Blonde (2022). However, HBO’s subscribers can enjoy its other popular streams like Euphoria, When Harry Met Sally and Promising Young Woman.

Blonde (2022) is not available on Hulu. The new release line-up additionally includes Pam and Tommy, How I Met Your Father, Abbott Elementary, and Vikings.

Blonde (2022) will be available to stream on Netflix. However, other brilliant shows like The Power of The Dog, The Social Network, Tick, Tick, Boom, and much more are available.