When you combine science-fiction with elements of Christianity, you get 2021’s Demonic. Written, directed, and co-produced by Neill Blomkamp, Demonic is a horror film with themes that are not explored quite often.

To some extent, the premise is reminiscent of the technology used in Black Mirror but instead of portraying a society on the brink of destruction due to super-advanced technology, Blomkamp deviates into religious themes in his story.

The film stars Carly Pope as Carly, Nathalie Boltt as Angela, and Chris William Martin as Martin. The cast also comprises Michael J. Rogers as Michael and Terry Chen as Daniel. Demonic was filmed against the pandemic and despite its interesting and unique setting, received negative reviews from critics post its release on August 20, 2021.

Carly (Carly Pope) reunites with her old friend Martin (Chris William Martin) following a terrifying dream of being burnt by her mother Angela (Nathalie Boltt). The fire is used as a tool for foreshadowing where the plot is headed towards.

She learns from Martin that her homicidal and estranged mother has been relocated from prison to a hospital following a severe neural trauma caused by a fight. She is in a coma and has apparently called for Carly, who has left her for her murderous actions two decades prior. However, Carly decides to go see Angela. 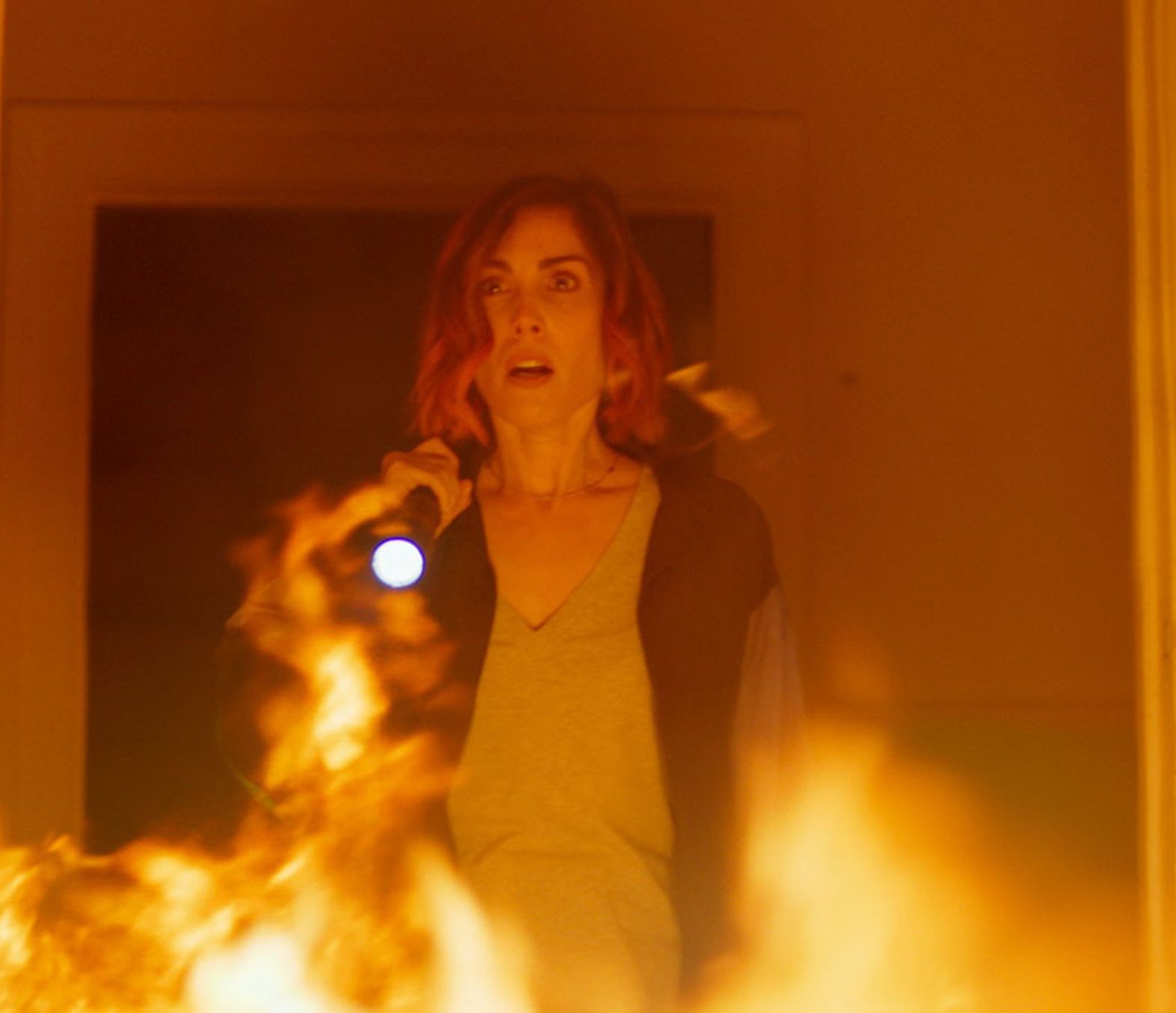 She meets two men (Terry Chen and Michael J. Rogers) in the hospital who tells Carly that they have the technology to enter the dreamscape of patients in comatose. She sees Angels, scarred all over her body, apparently from the prison fights. Carly is put under the simulation and she finds herself in her childhood home where she meets Angela. Carly is visibly resentful and hateful towards her but Angela asks Carly to leave.

Carly is interrogated about the experience by the men and asked to come again. Meanwhile, she suffers from strange hallucinations involving her mother. Carly goes back into the simulation and finds herself in a building.

She meets Angela outside who coerces Carly to leave immediately because she was called by ‘it’ and not Angela herself. Carly asks the men to pull her out of the simulation but they pay no heed. She ventures into the building where she sees her best friend Sam, dead and meets with a demonic entity. A scratch surfaces on her forearm, similar to the ones on Angela’s body and she is brought back.

After a rough altercation with the men about the incident, Carly meets with Martin who tells her about a demonic possession that supposedly caused her mother’s homicidal streak and how Carly could be affected by it. She also learns about a group of priests who are like a black ops unit against demonic possessions and operate as doctors and immediately connect it to the men at the hospital.

Later, Carly sees Sam turn into that demon and chase her while the real Sam was missing so she heads out with Martin to find Sam. After finding Sam, they try to free Angela from the possession but find out that one of the two men from the hospital possessed the demon now.

Carly meets with Angela one last time and watches her die in the simulation. She then gets into an altercation with the demon until she is finally able to save herself from its possession.

Several questions come into play here. How did Carly save herself in the end? What crimes did Angela commit? How did the simulation work? How does this so-called demonic possession work? Who were the people working at the hospital Therapol? Fortunately, every question here has an answer.

Demonic enters its climactic moment following Carly’s hallucinated encounter with ‘Sam’ who turns into a demon. Carly drives to Sam’s place and finds her missing while the door is wide open and the power is out.

She contacts the cops about the incident who are unable to find anything suspicious or any signs of forced entry in Sam’s house. She meets up with Martin and tells him about her hallucination/nightmare, the one where Sam turned into the demon from the building and attacked her.

She also shares how Sam asked Carly to look for her in the woods if she couldn’t find her. Martin recognises the patterns from his experience of being possessed by the demon and tells Carly that it was a premonition and Sam was in the woods. But, the demon did that to lure Carly.

They head off to find Sam and come across her. She tells Carly that she had visions of being burnt alive and that the men took Angela to the building. Carly decides to go back to the building to rescue Angela. 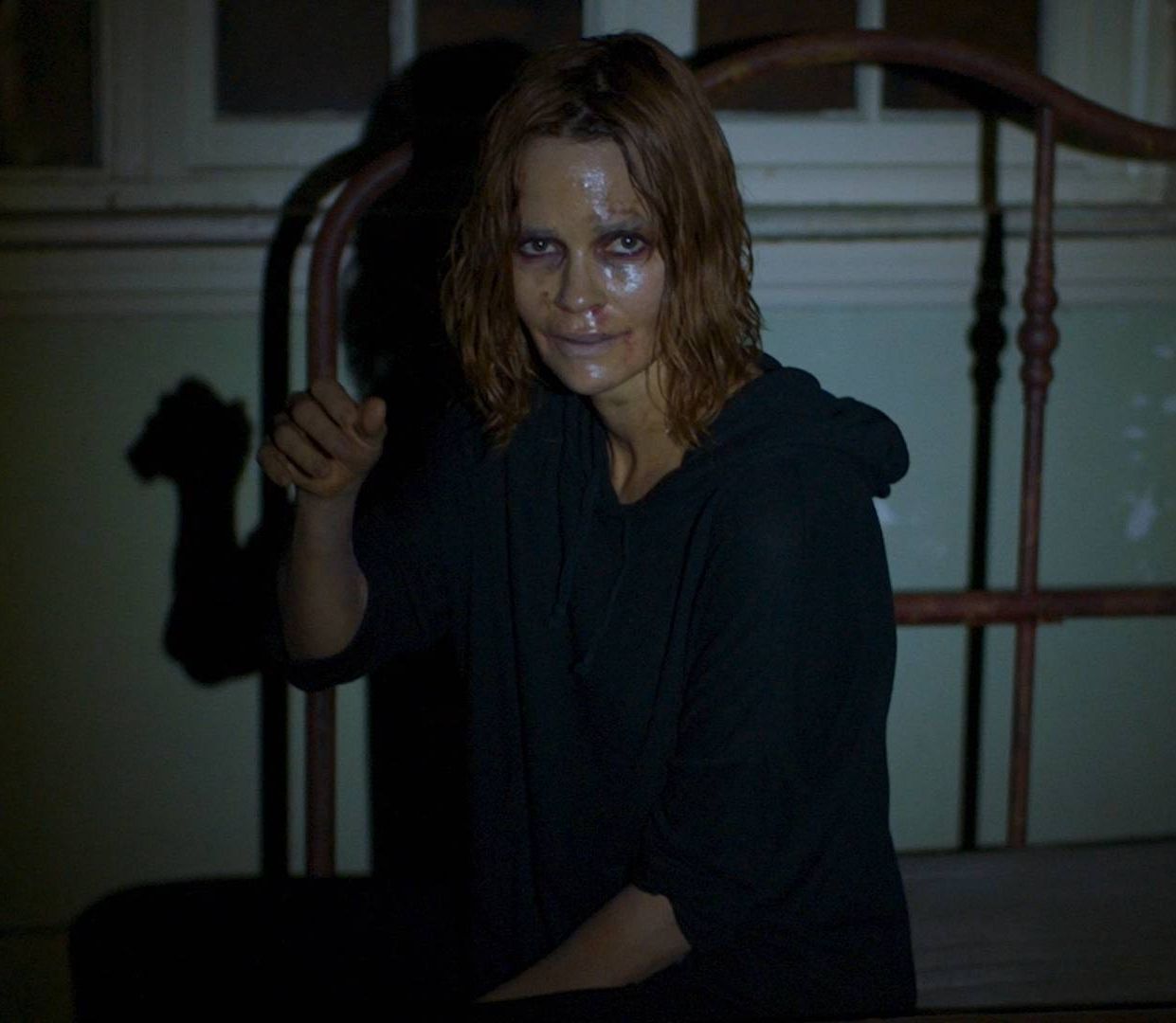 On reaching the building, Carly and Martin see a dead man lying against the wall. Carly notices a device lying on the ground and realises it’s the simulation. Martin sees the religious imagery in it and realizes that the men in the area are exorcists who are being killed by the demon.

Carly sees Daniel from Therapol hospital in the car but his face is bloodied. When they try to ask him about what is going on and Angela’s whereabouts, Daniel tells them that they always get the infected people back to the place where they got possessed. They use the simulation to enter their minds so that they can draw the demon out. Finally, he breaks the news that despite taking all precautions, the demon jumped from Angela and latched itself onto Michael.

He tells her that because Michael wasn’t in a state of comatose unlike Angela, it was free and was coming for Carly. Daniel gives her a holy lance which was in the Vatican for 1000 years and was the only thing that could kill the demon. He tells her that she had to go back into the simulation and get Angela out of there to save her.

They follow the cables and find several bodies of dead exorcists. Carly asks Martin to kill her if she gets possessed and he agrees. They find the room where Angela is being kept. She wears the headgear that will load her into the simulation and enters Angela’s dreamscape. Meanwhile, Martin leaves the room to look out for possible threats.

In the dreamscape, Carly enters a new place, a beautiful home. She comes across Angela, who looks the way she looked before the demon possessed her. She tells Carly that the house in this dreamscape was the house she had imagined for them prior to the possession, an idealistic future that never came into being.

As Carly tries to convince Angela that she can help her, Angela tells her that it was time for her to rest and that the demon was now outside. And, she dies. The heart monitor begins to flatline and the dreamscape falls apart, bringing Carly back to her senses.

Carly goes out to find that the car with Sam in it has been burnt. She is unable to find Martin but finally locates him in a dingy spot, tied up. Martin tells her that it is a trap and forces her to go when Michael (who is now possessed) comes to Carly and tells her that he likes to burn everything, especially people, and that after possessing Carly, he will burn Martin.

Carly runs away but the demon catches up to her, telling her that she was his new home. She acts frantically and is evidently disoriented. She uses the holy lance to stab Michael, which seems to have a good effect on the demon. However, it leaves its body and latches onto her.

The demon forces Carly to submit to it but with her sheer will, she stabs herself with the lance a couple of times. Finally, the demon leaves her body and gets lit on fire until it dies. In the end, Carly is seen recovering at the hospital with Martin by her side. She adorns Angela’s grave with flowers and the movie ends.

What were Angela’s crimes?

Carly’s mother Angela initially comes off as the antagonist. A homicidal maniac, Carly despises her mother to no end. She reveals her mother’s story while being interrogated at Theropol after the second simulation.

Angela’s life revolved around nursing. She loved her job. One day, as Carly was drinking with her friends Sam and Martin in her house while Angela was absent, she had an ominous feeling of something terrible happening to her mother. 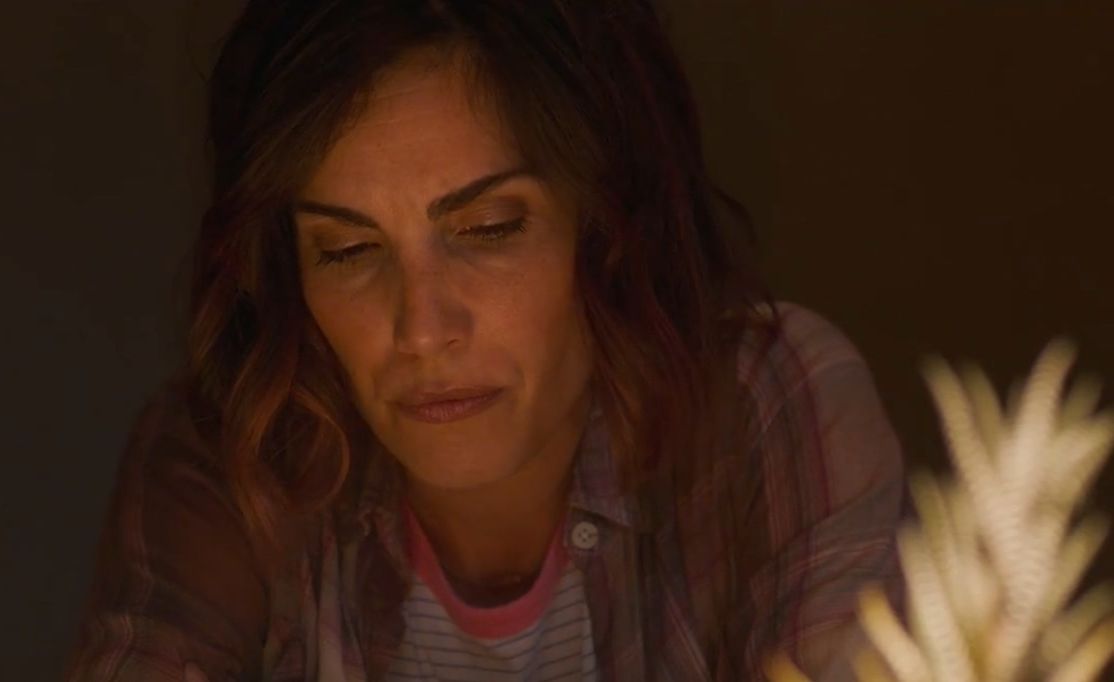 Angela had told Carly that she was going an hour north that morning to a sanatorium for tuberculosis as a part of the prevential medical team. She forced Martin to drive her there and found Angela’s car abandoned. She entered the building and found her lying on the floor with a cut exactly like the one on Carly’s arm.

Angela stopped talking to Carly and it went on like that for weeks. One day, as Carly was leaving for Sam’s place, Angela was seen cutting something as the kitchen counter got bloodied and she retrieved a beak.

One day, as Carly returned home, she saw Angela getting arrested. She had set fire to an old-age home where she worked, killing 21 people. She had also poisoned people at a local church and killed 5 others, including Carly’s grandmother.

After these revelations, Carly decided to abandon Angela.

How did the simulation work?

The simulation was an advanced technological device, used to pry into the minds of people. It would connect itself to the neurons of the person and project a dreamscape. Another person could wear a similar device on their heads and connect with others, entering their dreamscapes. 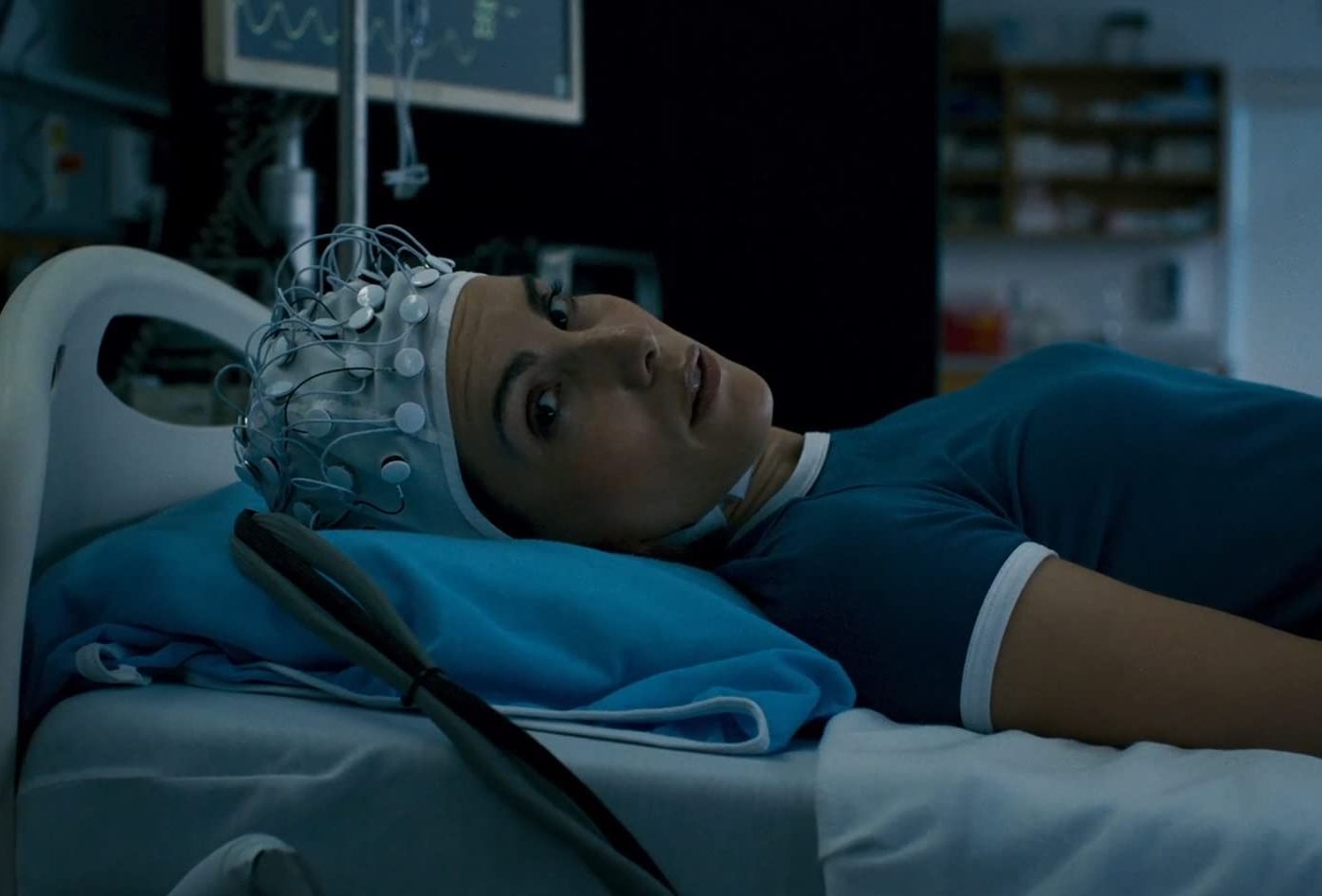 Carly would wear the headgear to enter Angela’s dreamscape while Michael and Daniel watched went on inside the simulation on their screens. As revealed by Daniel later, it was used by them (the exorcists) to enter their minds so that they can learn how to draw the demon out.

How did the demon possess people?

Martin used to have nightmares and had made sketches of what he saw during those events. One of those sketches looked eerily similar to what Carly saw in the building in Angela’s dreamscape. As explained by Martin, the demon supposedly haunts and torments its prey forever, influencing close friends and family as well. 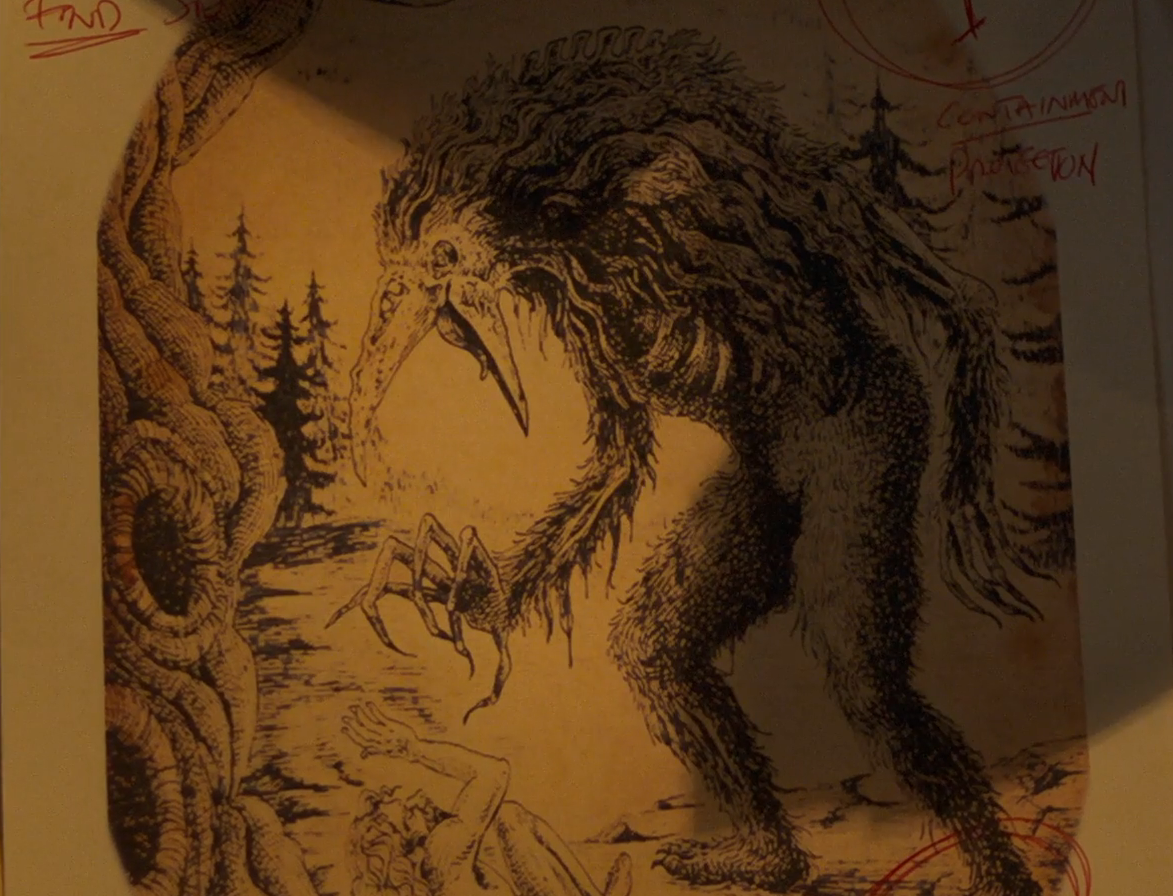 The sanitarium was apparently built on a haunted land with a horrible history of death. Centuries ago, it was a fur trading post and there were reports of bodily possessions and demonic activities. When a person got possessed, it would first make an amulet using a raven’s beak, as Angela was doing when Carly was leaving for Sam’s place.

Martin believed that the demon had a lair and Angela happened to walk past it following which the demon snatched her body.

Who were the doctors at Therapol?

Martin learned that the Vatican funded a unit similar to black ops but it specialised in exorcism and dealing with demonic activities. It used priests like soldiers and funded them to hunt demons. 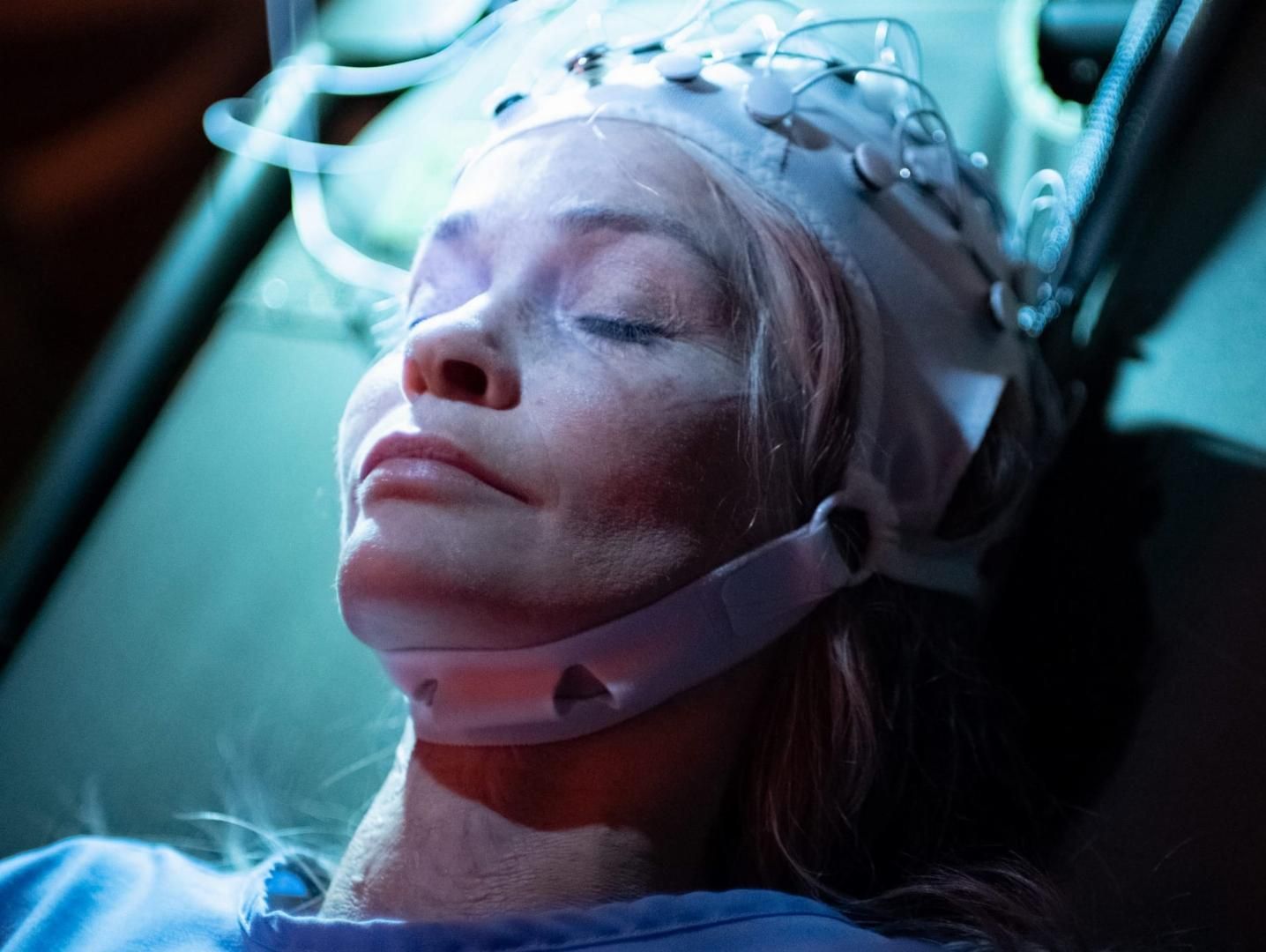 It acquired places like Therapol, private hospitals specialising in unexplainable cases and disorders in particular. The doctors were actually priests and used the simulation to figure out who is genuinely possessed. They take them to the place of infection and exorcise them.

The doctors at Therapol planned to take Angela back to the senatorium to exorcise her.