Dungeons & Dragons Honor Among Thieves 2023 Film – Everything We Know So Far!

Who needs heroes when you have thieves? – Oh well, it goes without saying that the level of excitement will be skyrocketing when you have a phrase like that. The upcoming fantasy action-adventure comedy film Dungeons & Dragons: Honor Among Thieves, from directors John Francis Daley and Jonathan Michael Goldstein, is scheduled for a March 3rd, 2023, official release.

The film, which was written by Goldstein, Daley, and Michael Gilio, is based on the Hasbro tabletop role-playing game of the same name. However, it has nothing to do with the original trilogy of films, which included Courtney Solomon’s Dungeons & Dragons in 2000 and Gerry Lively’s direct-to-dvd movies Dungeons & Dragons: Wrath of the Dragon God in 2005 and Dungeons & Dragons 3: The Book of Vile Darkness in 2012.

Honor Among Thieves, a remake of the D&D film series that takes place in the Forgotten Realms fantasy universe, is technically the fourth instalment in the series. a star-studded cast, the identity of which will be revealed later in the video. This film from Paramount Pictures promises to give the well-known TRPG a completely fresh perspective.

Without further ado, let us get on to the main topic of today’s video, in which we will share all the information we currently have about Dungeons & Dragons: Honor Among Thieves with you. This covers the anticipated plot, the characters and their roles, the settings, the monsters, the magic spells, and the weaponry. Ideally, be prepared for this!

Dungeons & Dragons: Honor Among Thieves (2023) – The Plot To Be Expected

One thing is for sure; you do not have to be a fan of the franchise or the tabletop role-playing game to get immersed in the fantasy world of D&D. Just one peek at the two-and-a-half-minute trailer of the upcoming movie, and you are in for it, asking for more. Produced by Brian Goldner, Nick Meyer and Jeremy Latcham, the latter best known for producing works such as The Avengers in 2012, Guardians of the Galaxy in 2014 and Avengers: Age of Ultron in 2015, Honor Among Thieves has a group of misfit adventurers, and in this case, a team of thieves, who are brought together by a common goal. From the trailer, it is pretty clear that they have aided the wrong person in stealing the wrong thing.

Of course, it was not their intention to unleash the greatest evil that the world has ever known, but now that the damage has been caused, they do have plans of fixing their mistakes, and no points for guessing, save the world. Pulling that off will not be an easy thing; executing a heist as epic as recovering the lost relic, the group needs strength, courage, magic and a Tiefling Druid for that matter. 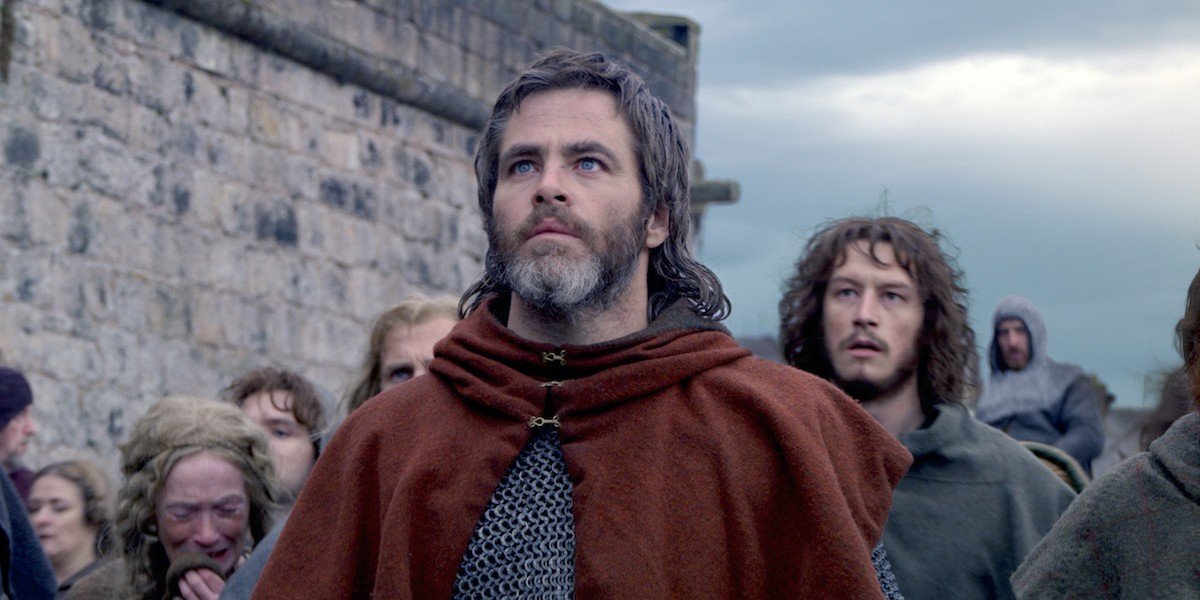 Conclusively star-studded, this brings us to the cast of the movie and the parts that they portray. We will begin with Chris Pine, a bard who plays the lute and does the occasional playful capers – most certainly not the introduction that Pine would have wanted. Anyway, his character is called Edgin; he is the leader of the group and the one to make plans. Also, if the existing plan fails, Edgin is there to make a new plan, which obviously points out to the fact that there are times when his plans do go wrong.

A closer look at Chris Pine’s attire, and one can see him wearing a pin, one that looks like the symbol of the Harpers. This can only mean one thing and that is the high probability of him being in the Harpers, the semi-secret old organization that is committed towards advocating good, conserving history and maintaining a sense of equilibrium between civilization and nature. Guess, we will have to wait for the movie to confirm that!

Next, we have Michelle Rodriguez as a badass axe-swinging barbarian called Holga, who clearly symbolizes the strength aspect of the group. You will be happy to know that the actress literally had to gain close to ten pounds of muscle via tremendous levels of work out and extensive amounts of fight training to fit herself into the role. We have Justice Smith portraying a sorcerer named Simon boasting some mind-blowing spell casting abilities as well as Regé-Jean Page playing Xenk, who happens to be a paladin seen to join the group later and one can only wonder what his cause for joining the team is.

Then we have Sophia Lillis portraying Doric, a Tiefling Druid, who is capable of shape shifting into various animals, an owlbear for instance! For those of you who are wondering what an owlbear is, it is a crossbreed and a vicious one, may we add? Going by the name, it has the furry body, strength and size of a bear and the head, talons as well as the beak of an owl. An owlbear is exceedingly dependant on its power of smell and sight, making it highly aggressive and unquestionably very dangerous. In the trailer, one gets to see a horse shape shift into an owlbear, brutally ambushing a group and then reverting back to its druid form, which is Doric.

No wonder, Lillis happens to be a significant character in the movie and one can only wonder what else she turns into! Surely, the wait for the flick to have its official theatrical release next year now seems to be arduous. Rounding out the cast, the film has Daisy Head, Jason Wong and Chloe Coleman with not much information about their characters, except for Wong playing somebody called Dralas.

And, saving the best for the last, we also have Hugh Grant essaying the part of Forge Fitzwilliam, a complicated and definitely not a dependable rogue. Now, if you ask us, we believe that there is a chance of Grant portraying the role of Lord Neverember, the lord of Neverwinter! But then again, we will have to wait for the movie to confirm that. 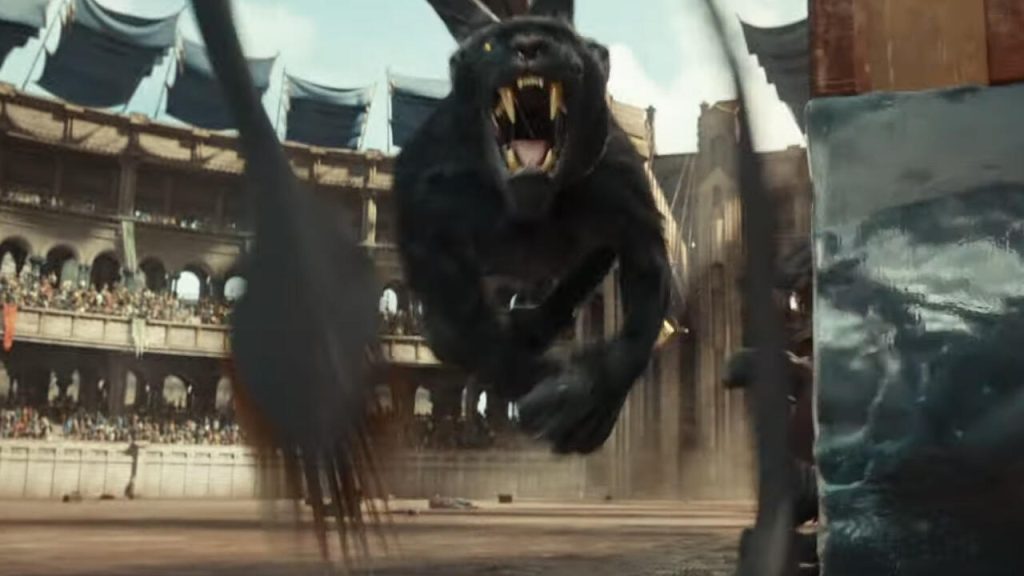 Shot mostly in Northern Ireland – Belfast, to be more precise, as well as Iceland, Goldstein and Daley made sure that they resorted to using as many practical effects and animatronics as visual effects to give it a more authentic feel and let the audience get immersed in it. Coming back to the locations in the trailer, what we have here is Nelanther Isles, which is shown at the very starting of the trailer.

Then we have the vast underground cities – Underdark, to be more specific, followed by the City of Splendors or Waterdeep. There is also Neverwinter featured and let’s not forget Revel’s End. Now that we are done with the locations, let’s get to the monster part, which happens to be a blend of the ones that fans would have wanted to see, as well as the ones that the filmmakers could bring to the screen and convincingly so.

The creatures were taken from the Monster Manual and the ones featured in the movie are a mix of both favorites as well as the lesser known ones. We have already spoken about the Owlbear before, so we will head straight to the Black Dragon, one that the trailer wastes no time in introducing. This fearsome beast is seen menacingly gliding over a peak full of soldiers and simultaneously shooting acid all over them.

It is pretty hard to disregard the Watchspider, especially its distinguishing red markings up on the bark of the tree in the forest scene. Next, we have a golden metal-studded dragon statue coming to life; now, this can be a White Dragon, one that is also known as an Ice Dragon, but we have to wait for the movie to know its real deal, or maybe for more trailers, if they have this on display again.

Then we have the Mimic, one with the toothy mouth and the extended tongue. The shapeshifting predator is seen making use of  its pseudopods to spring after its preys. Mind you, the Mimic is known for deceiving its victims by looking like an inanimate object and in this case, a treasure chest! Moving on, we do get a quick look at a Displacer Beast – the cat with the six legs and two protruding tentacles on the back used mainly for hunting purposes.

The trailer also has on display a Gelatinous Cube, which is basically this gigantic, carnivorous, transparent cube of acidic ooze. These cubes are famous for gradually dissolving their victims inside them and you need a lot of strength if you want to escape out of it. Last but not the least, there is also this colossal chunky Red Dragon that we get to see in the trailer, which in all probability happens to be the Themberchaud – definitely keeping our fingers crossed for this one! 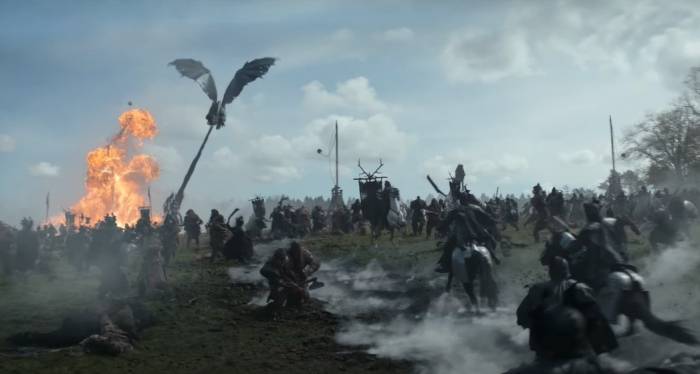 What is a D&D movie without some spells? It goes without saying that Honor Among Thieves has plenty of spells that are being cast all throughout. Apart from the exemplary Thunder Wave shot and the classic Fireball, there’s Lightning Bolt, the Timestop, the Shield as well as the Magic Missile. Well, these are the ones that are shown in the trailer, which obviously means there are more of such spells in the whole movie.

Now speaking of the weapons on display, there is a magical helmet donned by the sorcerer, a Green Flame Blade, a Flame Tongue sword, a blue floating magical orb and we sincerely hope that we aren’t wrong about the Horn of Orcus. The glowing red horn thing is seen to be in the hands of someone draped in a long red robe, one who is pale to look at, boasts a skeletal face with a tattooed bald head and is in all possibility, a lich. We know what you are thinking. If the trailer looks this exciting, the movie is quite capable of blowing our damn minds!

While there is no denying that the trailer already has us hooked to Led Zeppelin’s Whole Lotta Love, the upcoming movie brags Lorne Balfe’s musical score and add to that Barry Peterson’s spectacular work of cinematography. Already a hit amongst fans!

With this, we have come to the end of our video here. Do hit us with your thoughts in the comments section and let us know how excited you are for Dungeons & Dragons: Honor Among Thieves. Till then, stay tuned with us for more interesting content on the Dungeons & Dragons franchsie!