Exoprimal – An Insane Dino Survival Game For Dino Crisis Fans – Everything We Know So Far!

Rarely do video games appear whose appeal is both immediate and potent, appealing to all children everywhere and appealing to their deepest selves by posing one of the oldest and most contentious topics in gaming history: would dinosaurs or machines win a fight?

These kinds of intriguing, unconventional ideas are what keep the gaming sector vibrant and fresh, giving the audience much-needed pleasure in ways that are admirable. Action in Robots vs. Dinosaurs increased by crazy graphics? Come on, we can all agree that this game has incredible potential for success.

We have a very minor request before we continue with our explanation.

If you enjoy our work, kindly support us by becoming a subscriber. It may seem like a tiny gesture to you, but it means a lot to us.

What is Exoprimal about? 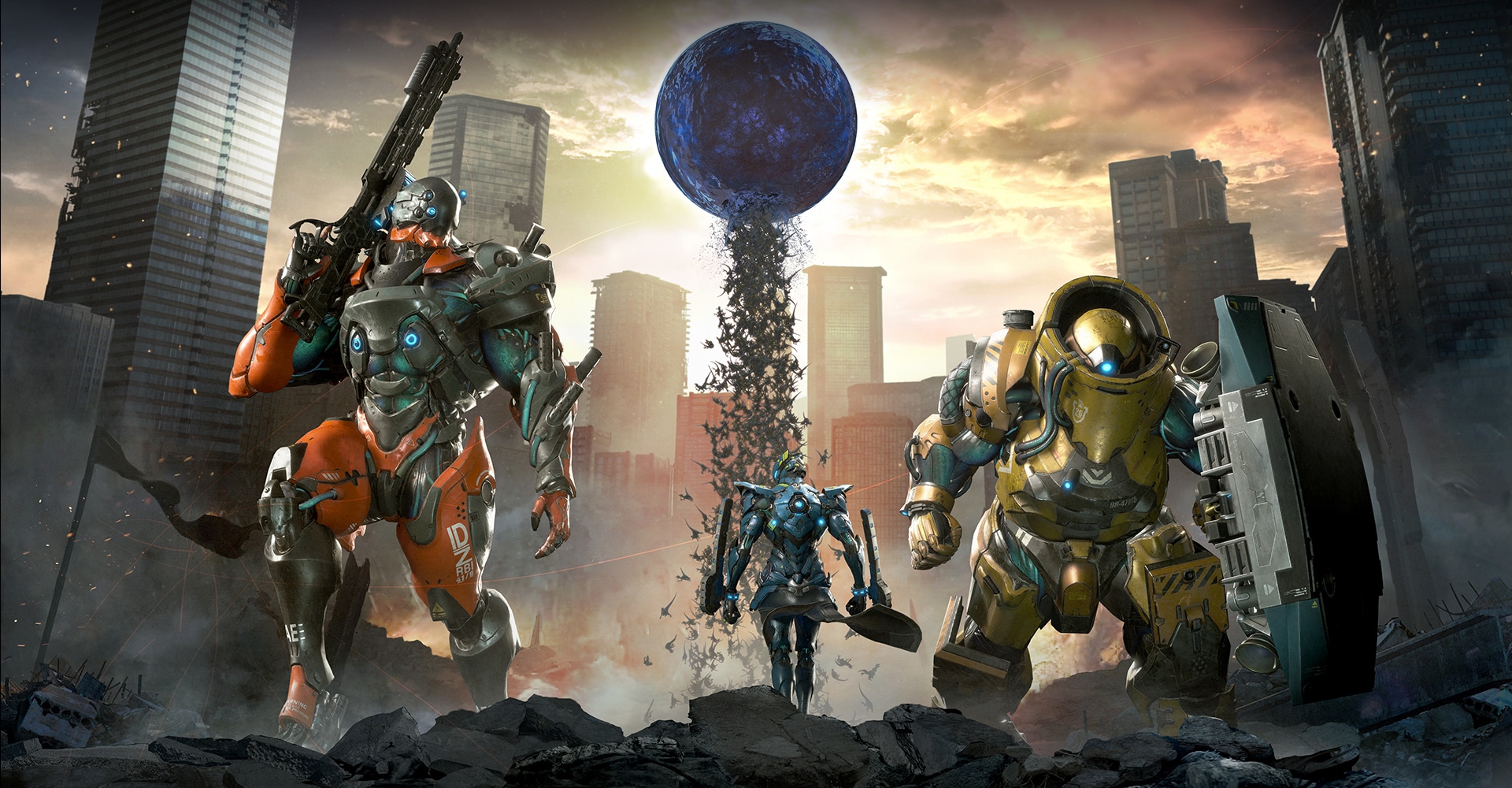 It’s the year 2040 and Dinosaur catastrophes have covered the globe, posing a serious threat to humanity’s survival.  However, not all hope is gone. The company Aibius has created Leviathan, an ultra-advanced AI that can forecast the whereabouts of subsequent breakouts. Along with Aibius’ innovative supercharged suits, or exosuits, this technology gives mankind a battling opportunity to stop the creatures’ hordes.

Exofighter operators, often known as exosuit pilots, are in limited supply. Pass the exofighter intelligence test and assist Aibius’ brave fighters in their battle to save humanity from extinction. Capcom developed and released this game, which tries to answer the age-old conundrum of Overwatch-style team combat by allowing you to flexibly switch among offensive, tank and combat support to assist your squad withstand endless waves of dinosaur assaults.

It’s difficult not to be enthusiastic for all the mecha vs dino action with verified professionals like Dino Crisis producers Hiroyuki Kobayashi and Monster Hunter Generations architect Takuro Hiraoka on deck. The player is sent to Bikitoa Island, in which the enigmatic Aibus Corps performs Exoprimal investigation. Exoprimal’s studies also clarify why two groups of Exosuited people are battling dinosaurs and one another.

Various missions, such as “Dinosaur Cull” and “VTOL Defense,” will pit gamers against each other in a hurry to finish their work before another team, providing Exoprimal an advantage. Exoprimal appears to be a team-based game, akin to Team Fortress 2 or Overwatch, with each category having its very own Exosuit.

An exotic FPS for its age 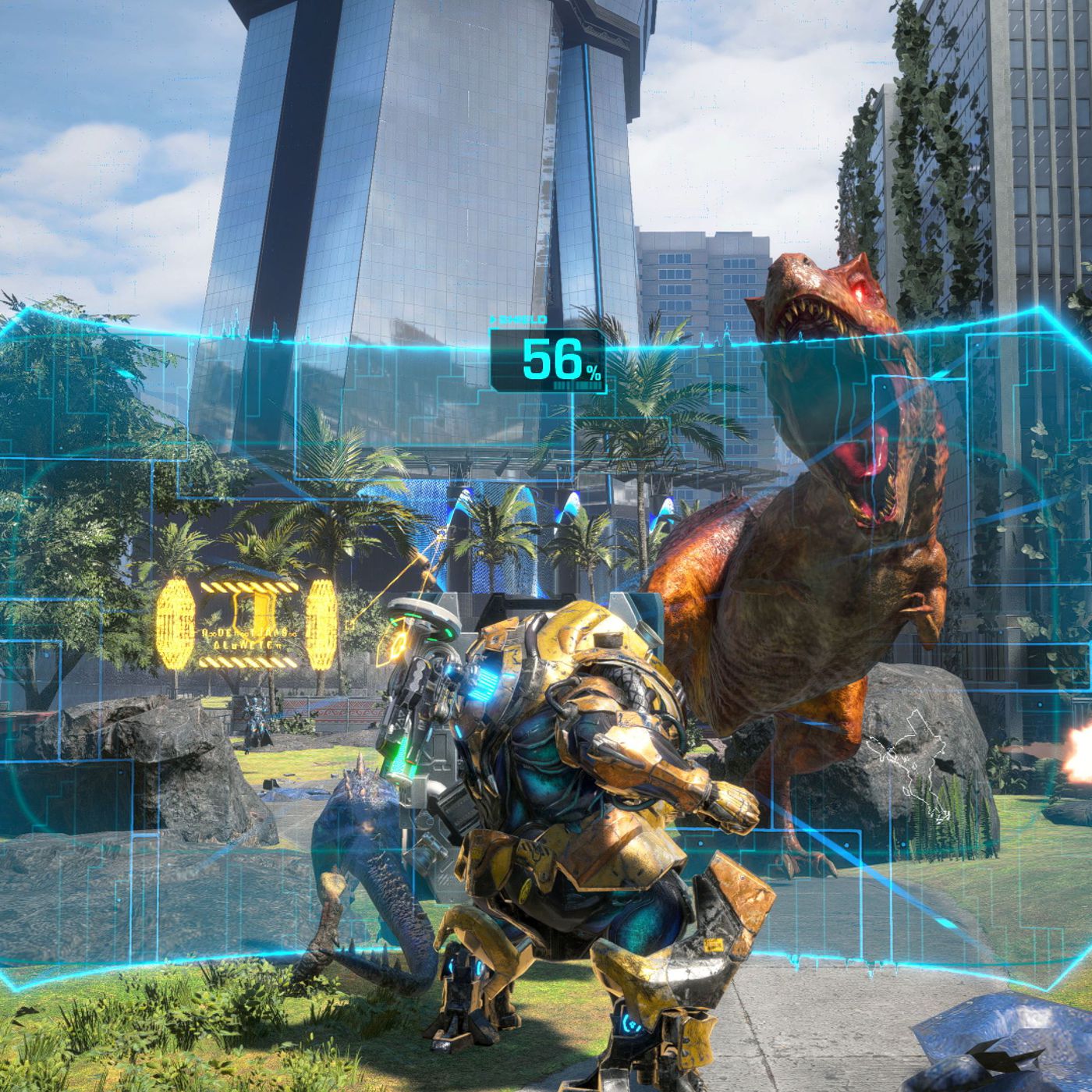 Although some strong action is shown in the trailer’s focus, Leviathan’s assessment of the history of mankind is shown in the backdrop. Leviathan looks to be the major enemy in Exoprimal’s tale, based on how the AI speaks about civilization and its shortcomings, as evidenced by a phrase later in the video where it begs humans to die fighting for them. Leviathan, much like most AI in movies, TV programs, and videogames, appears to have gone wild.

Nonetheless, this latest video is lengthy enough to give you a good overview of Exoprimal’s categories as well as the game’s various objectives. The classes, especially, are the show’s feature, with different melee, distant, tank and healer categories. During missions, we get to see the player disembark and switch classes, which must make things easier to adjust to the scenario and test out the various classes. The action appears to be fast-paced and exciting, and that is always a plus.

We were exposed to a range of game concepts and the actual story of the title by the debut trailer, which was shown during a PlayStation 5 State of Play in March 2022.

Does Exoprimal Have A Connection To Dino Crisis? 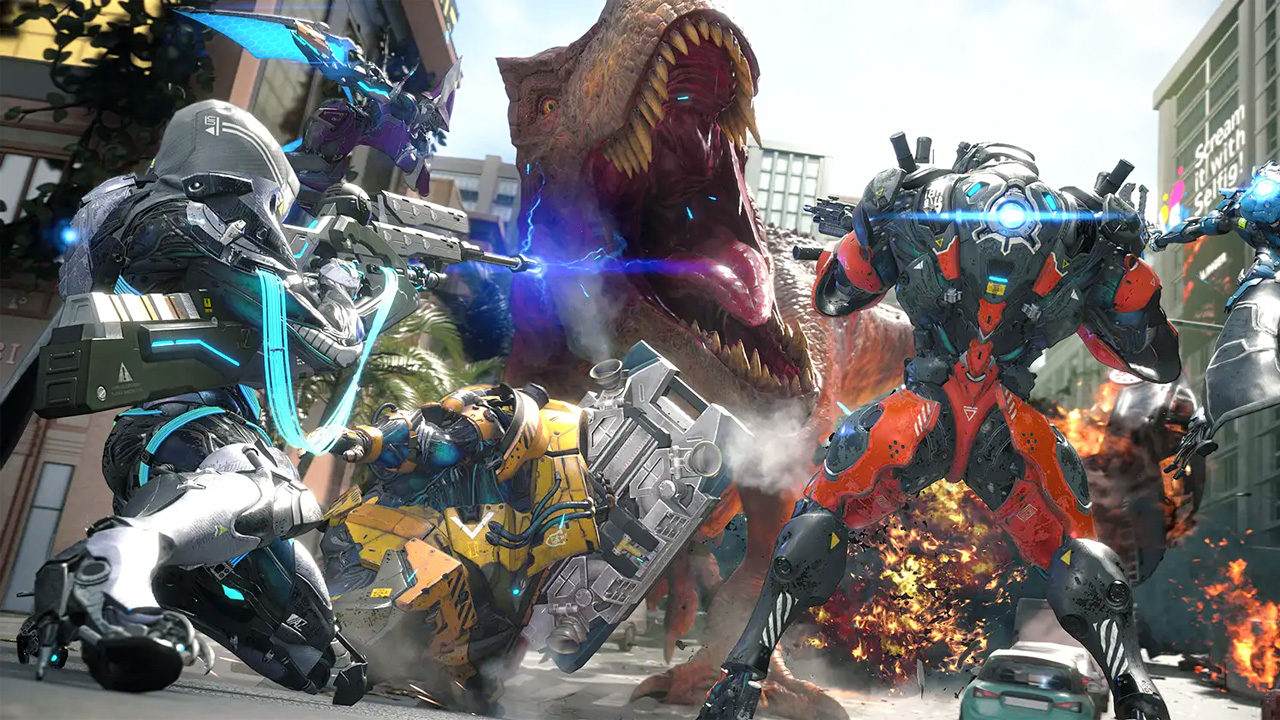 Since the game’s original announcement, though, the public has been posing questions about Exoprimal, particularly if it has any ties to this other renowned Capcom brand, Dino Crisis. With Capcom rebuilding classic games like Resident Evil 2 with the RE System, fans hoped that Dino Crisis might be revived as well, and many speculated that Exoprimal might be connected in some way.

One figure in Dino Crisis notably matched the heroine Regina in the game’s first teaser, causing a flurry of speculations and conjecture about a probable link. Keeping tabs on Exoprimal’s current huge display, producer Ichiro Kiyokawa and director Takuro Hiraoka cleared the air on any potential ties to Dino Crisis. When pressed during a brief interview, the duo responded that Exoprimal is “its very own special thing and therefore has no reference to Dino Crisis.” Hiraoka went on to explain that Exoprimal is a complete launch, laying to rest any speculation that it is Capcom’s effort at a free-to-play style game.

When Is Exoprimal Releasing? Which Systems Will play Exoprimal? Capcom has only guaranteed a 2023 launch date for the game, and nothing more specific has been divulged. Capcom has been quite sure in its 2023 deliveries, so we anticipate seeing the title debut soon, and we’ll learn as much from the Capcom conference during Summer Game Fest. It is set to release for PC, PS4, PS5, Xbox One, and Xbox Series X/S. 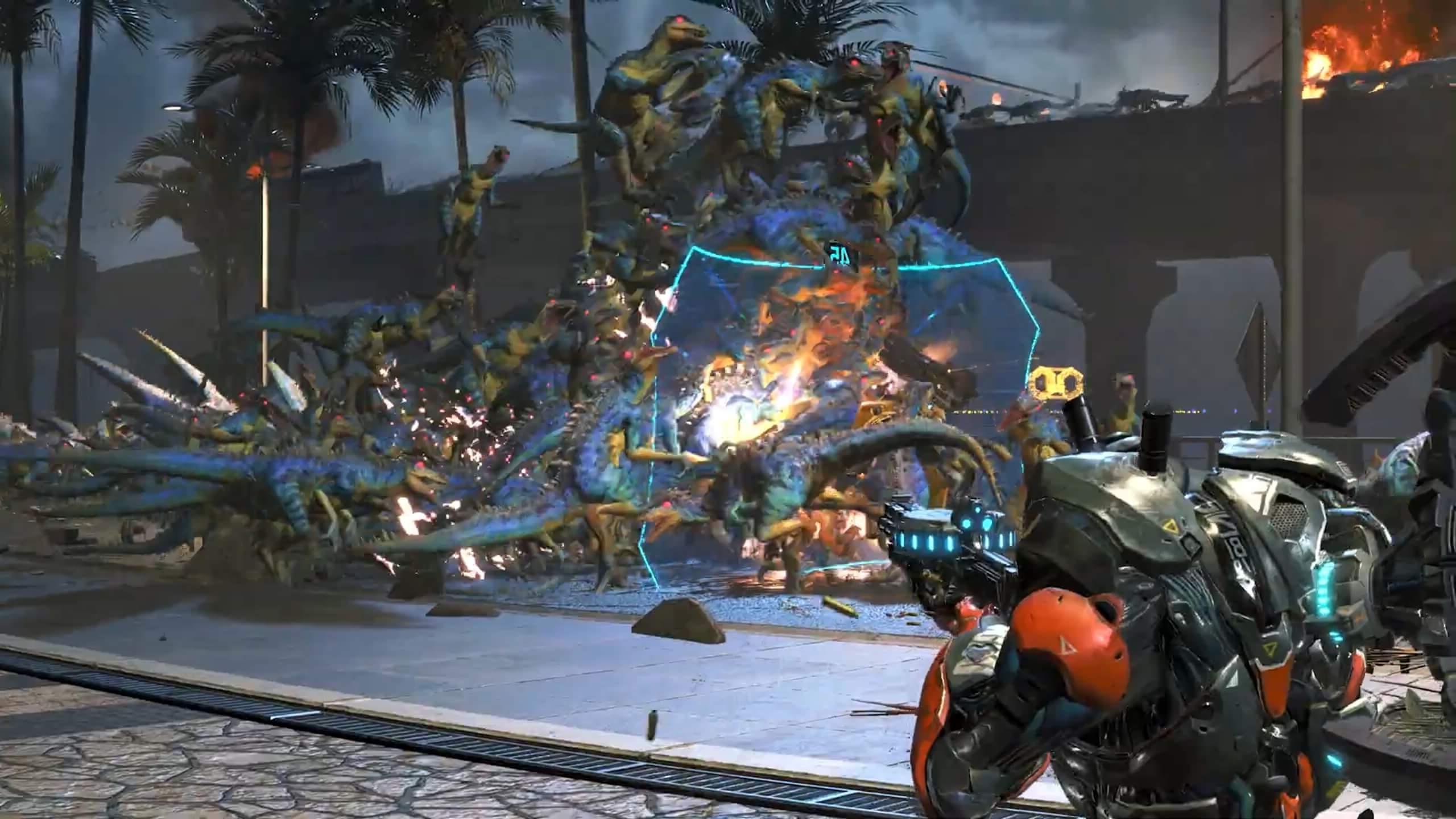 Network tests are common in the gaming business, with nearly every multiplayer online game undergoing one in the period preceding up to its official completion. Exoprimal’s network trials are exactly on pace, with a delivery date of 2023 still on the table. A network test has a straightforward purpose: many programmers use it to monitor the demand on the game’s infrastructure at different times in different areas.

As a result, a player’s performance in a network test might be extremely varied, with some users being able to play the game without trouble while others experiencing significant slowness, server failures or persistent technical faults. All this is done to assure that the product is as flawless as possible when it launches, with none of these technological difficulties affecting players who spent $60 to get in on the first day. On three different dates, Capcom will organize a network trial, each of which will focus on a different part of the game’s networking capabilities.

Because Exoprimal’s network tests are restricted, participation will be constrained and individuals interested in trying out the game before the 2023 release must meet a few strict access conditions. The initial set of criteria requires the user to have both a Steam profile and a Capcom ID, as well as to have connected both accounts via Capcom’s official site. Players should also be at least 17 years old.

Only participants from the United States and Canada would be picked for the first round, with individuals from the rest of the world having the chance to be selected for the 2nd and 3rd sessions. The network test is also only playable on PC, and Capcom needs that the player have a PC that meets the stated criteria, that can be obtained on the Exoprimal network test section on Capcom’s main site.

If the user checks all of those criteria, they can consider signing up on Capcom’s website immediately. Those interested in participating in the network tests must register by June 29, since the enrolment period ends on that day. The first phase of the network testing will be held on July 4, and the 2nd and 3rd sessions will be held on July 12. After completing the network assessment, gamers will be asked to complete a questionnaire on their total evaluation of the game.