Neon Maniacs, a hilarious 1980s creature feature film, is what we have for you today. Under the titles Neon Maniacs and Evil Dead Warriors, it was released in 1986. The original script called for 27 monsters and was significantly longer. The filmmakers, however, were on a short budget and had very lofty goals.

They made the decision to go for it nonetheless and created a fantastic fest of a dozen creatures for this movie. Each of them was distinct in its own right, with a variety of skills and appearances, and each even had a preferred method of murder. So let us find out what today’s encounter with these novel creatures holds.

Night Falls So Do Their Victims – Neon Maniacs 1986

Set in the regular world, as it is ruled by violence, the Neon Maniacs darken the paths of young children. With this ominous message, we see a man discover a set of cards inside an animal skull. The pictures resemble a tarot deck of comic book villains. As he flips through them, an axe comes down and kills him. The pictures are of the Neon Maniacs, a dozen monsters who live under the Golden Gate Bridge.

We see a bunch of teenagers hanging out in a van and going to get some beer. They drink beer at Tracy Park when they are attacked by the monsters. These teenagers and their deaths make up the most part of the storyline. They are seen being killed by different monsters using different techniques. They kill everyone except Natalie. There is no explanation given, but somehow, they were unable to kill her at that time.

She is saved by the appearance of two police officers. So, they come after her later that night. She stays alone in a big house. So, of course, after an adventurous night of murder and interrogation by the police, she decides to take a relaxing swim. One of the monsters tries to catch her before she jumps into the pool but to no avail. He then disappears as she swims. I thought that he would jump in the water, considering how desperate he was to kill him, but I guess it was his bedtime instead.

Meanwhile, Paula, a young girl in Natalie’s school, is a horror movie addict with an actual bedtime. You can see a number of masks and posters of various horror movies displayed in her room. She is highly fascinated by horror movie characters and the supernatural. So, like an inquisitive horror fan, she goes up to Natalie to ask her about that night. However, Natalie doesn’t want to talk about it. She is tired of not being believed by the police and the parents of the kids who died. She tells Paula to go away. So, Paula takes things into her own hands. She goes exploring Tracy Park to find any clues. You can see the amount of excitement on her face when she sees the goo on the ground.

She is the first person to find out how to kill the maniacs. While she is searching for them, she comes across a few dead pigeons. Before she can go inside the gate to find more evidence, a police officer shows up and asks her to leave. She quickly goes back home and sneaks out again when her parents leave for the night. She has an inkling that there is something hiding there. When she reaches the location, she sees the maniacs exiting from the gate.

One of the maniacs falls into a buddle of water, and his hand turns into goo. She sees all this and captures it all on her camera. However, they do not show up on the tape. Later that night, one of the maniacs comes to find her and kill her. But she manages to defeat him. She tries using a crucifix which doesn’t work, and then water. Water works like a charm, and the monster suddenly turns into goo.

On the other hand, Natalie and Steven have been having an adventure of their own. They meet again when Steven comes to deliver groceries to her house. While they are there, he asks her out for a movie, and she agrees. So, while Paula is trying to investigate the monsters, these two are taking the subway to watch a film. However, the monsters show up on the subway as well.

They kill the train operator and try to attack the two. Considering the 80s, the technology is a bit too good. It is able to detect if there is something wrong with the train and does an automatic stop and opens the doors in the nick of time for Natalie and Steven. They make a run for it the moment the doors open and get into a bus. But it doesn’t end there. One of the monsters tries to grab Steven and kill him through a bus window. Natalie quickly shuts the window and severs the maniac’s arm.

The next morning, Paula shows up at Natalie’s house. She tells her that she too has seen the maniacs, and she now knows a way to stop them. At first, they contemplate telling the police, but their previous reaction to Natalie’s story was not promising enough for them to try another time. This is when an idea strikes them. They decide to use the school’s battle of bands event to catch the maniacs.

They think it will be a safe space for Natalie and Paula since many kids will be present at the event. But they forget that these monsters are pure killing machines. If they cared about consequences and being caught, they would’ve become serial killers. Natalie is still sceptical about being at the event, but both Steven and Paula reassure her with their water guns.

As predicted, the monsters enter the school. They ensure chaos and create mass destruction. Meanwhile, Paula and Steven use different water sources to attack them and disintegrate as many of them as possible. Later, the three of them tell the detective that the monsters live under the Golden Gate Bridge and can be killed using water. But he doesn’t believe them. However, he does go with them and check if the maniacs are actually living under the Golden Gate Bridge.

But they aren’t able to find anything and return home. But the detective still has his doubt about it and goes to confirm it once more. This time, however, he decides that it is a good idea to go alone. And lo and behold! A monster appears from a portal of sorts and eats the detective. The Maniacs travel to Earth via a gateway that is on the back of an old truck inside a storage facility at the foot of the Golden Gate Bridge in San Francisco. However, this bit is never mentioned in the movie. The movie ends on this note without concluding or giving closure on what happened to the children who died or the police officers.

The Neon Maniacs A Tribe Of Monsters 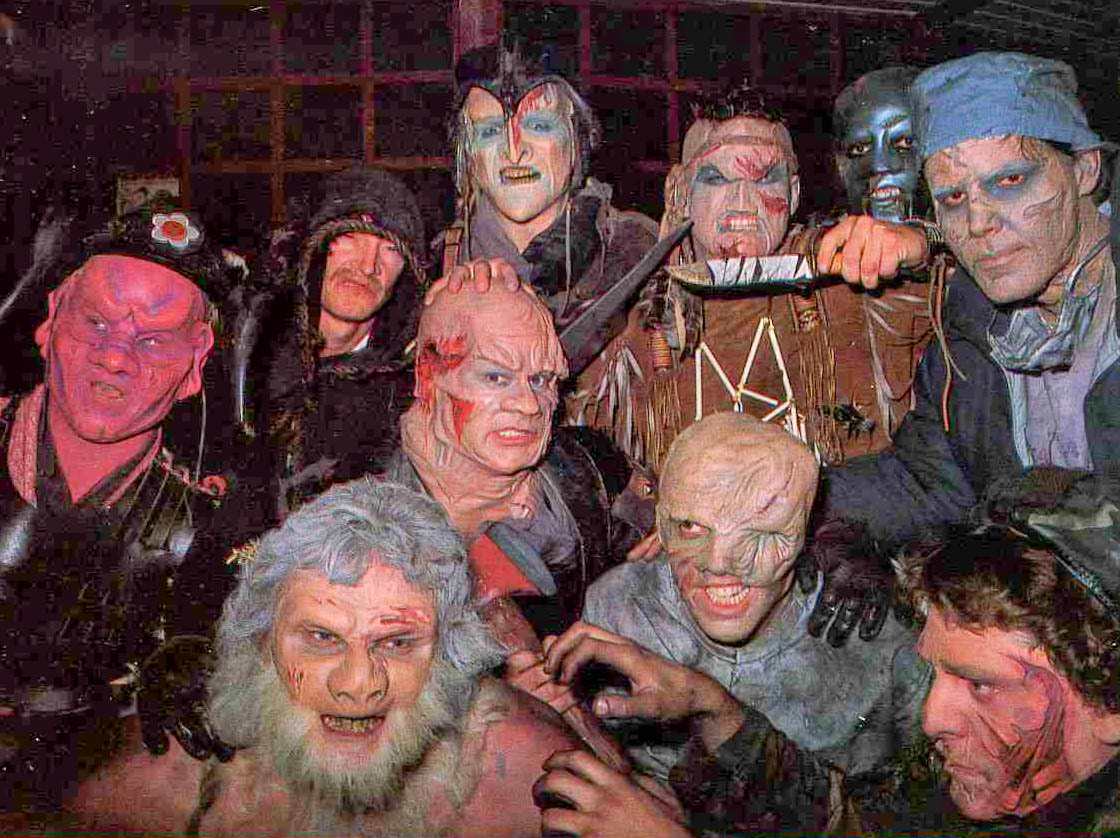 As we mentioned, the neon maniacs are a tribe of a dozen monsters. They are inter-dimensional beings who travel through a portal in the back of an old truck under the Golden Gate Bridge. They are like serial killers, but they don’t have a type. Each of them has a unique way of killing people, but they kill people judiciously and without discrimination.

The motley crew is like a psychotic version of the Village People. They are all gritty-looking monsters with rubber mask-like faces. There are Archer and Axe. As their names suggest, Archer is the one with the crossbow while Axe is the one with the axe. Axe is the first maniac we see in the beginning when the first man dies. Juice is a maniac with the ability to electrocute people. His body is metal, and he wears a ghastly mask with a slash across the face and a glassy eye. He is quite the representation of a science fiction maniac.

On the other hand, there is Samurai, who is quite obviously, a Samurai. He wears the Japanese attire of a Samurai, but he doesn’t look Japanese in the film at all. Other than that, there is Punk Rider, Decapitator, Soldier and a zombie surgeon called Doc, who is seen ripping a heart out from the ribcage of a security guard. We see Hangman as well, who was the same monster whose hand Natalie chopped off using the window of the bus. These are the few monsters that are recognizable and who get as much screentime as possible.

These monsters aren’t elaborated on, and neither are they given individual time due to budget constraints. In fact, some of the monsters are credited to two different performers. This happened because the shooting of the movie shut down for three months due to budgetary constraints. When they started reshooting, the same actors were not available. The oddest thing about these monsters is that while they turn into goo when they come in contact with water, they still choose to teleport using a portal that is near a source of constant seawater.

Why should you watch Neon Maniacs 1986? 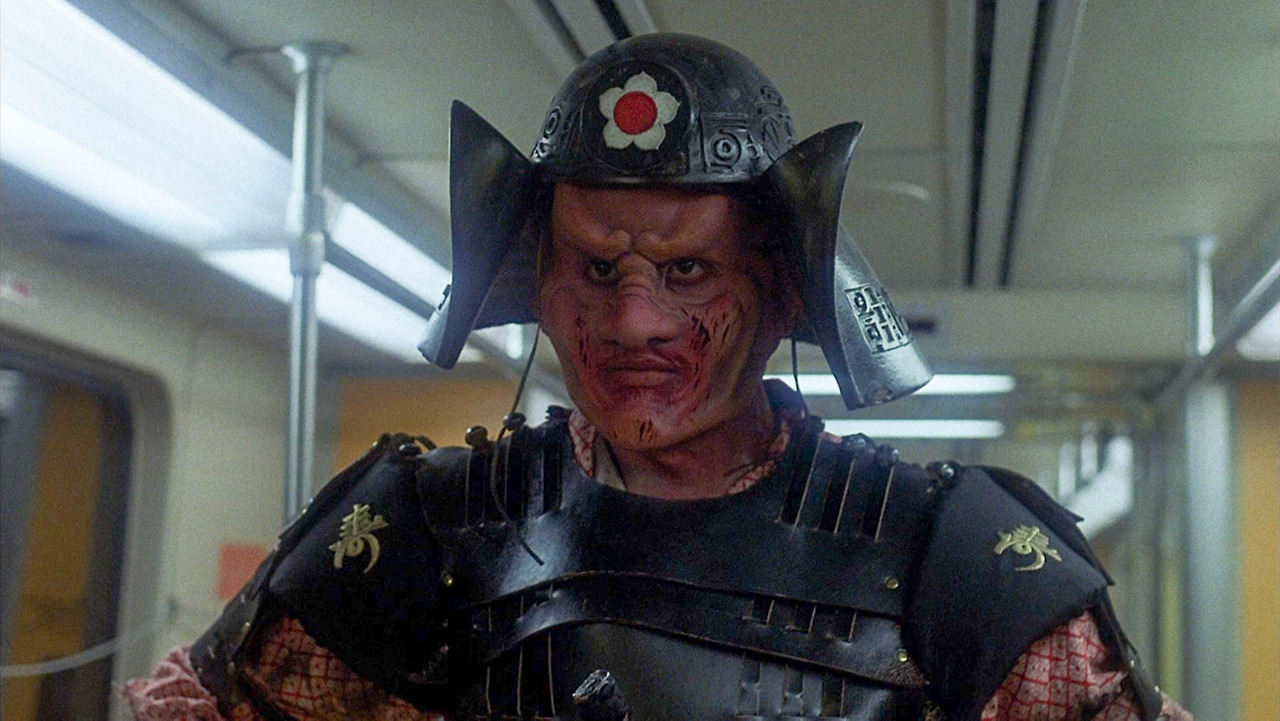 The Neon Maniacs is a fun film if you want to watch something with a lot of comedic relief and not a lot of plot or storyline. But somehow, it is still a movie that I would want to watch on a bad day to feel better. It has the feel of a comfort movie through and through. It plays like a home movie made by someone like Paula, which is somehow highly entertaining. I think it is worth the watch, at least once. Some people even want to see a sequel, so why not give it try once?