Ted Nicolaou directed TerrorVision, a 1986 American science fiction horror comedy film. Albert and Charles Band produced and wrote the film. Empire International Pictures released TerrorVision in February 1986. The story centers around an alien creature that is transported to Earth and ends up within the home of a strange family, where three children must care for it to prevent it from going on a hungry rampage. 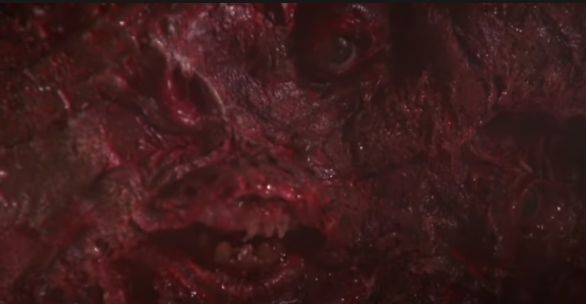 We start off with an alien garbage disposal on the planet Pluton. Another alien has turned a scary-looking monster with one eye known as the Hungry Beast into energy. He sends the energy hurtling into space, where it bounces off a few planets. Meanwhile, the Putterman family on Earth is trying to get satellite television. Mr. Putterman is pulling all the stops to get a finicky DIY satellite antenna to work.

He hits the satellite with a hammer to make the television repair guy work, but it attracts the bolt of energy from Pluton instead. The reception is poor at first, but as a bolt of extraterrestrial energy strikes the dish, it rapidly improves, and their television starts working.

Sherman Putterman and his ex-military grandfather, a survivalist, decide to enjoy a night of horror films presented by Medusa while eating lizard tail jerky. I’m sure it is as disgusting as it sounds, but Sherman’s grandfather makes a pretty good case for it. Meanwhile, Suzy, Sherman’s sister, introduces the family to her rocker boyfriend, O.D.

It might be a clever play on how rockstars end up overdosing on drugs, but I might just be reading too much into it. Either way, he is quite the punk rock replica of goth musicians. Suzy’s parents don’t seem to mind it much. They then get ready for a wild night as they go to meet a few swingers.

Sherman and his grandfather keep trying to find good movies to watch, but they struggle to find scary content. During that time, the grandfather tries to use the satellite controls. But we all know what happens when old people use technology, so Sherman was worried that good ol’ gramps would break the controls.

He didn’t, but the satellite did stop working a couple of times. Mr. Putterman had called the repairman for the satellite before leaving. He arrived shortly after the grandfather messed up the controls. He goes to work on the satellite, but when Sherman and his grandfather go to check on him, he isn’t there. The poor man had disappeared into thin air.

Ultimately fall asleep, but they are startled awake when the Hungry Beast appears from the television. One of his eyes slithers and snuggles right next to Sherman under the covers. It seemed cute until it devoured Sherman’s grandfather. The Beast just grabbed his head, and green liquid started pouring out. It was quite disgusting to watch, but it also had a cinematic horror kind of beauty to it.

After seeing his grandfather disappear, Sherman went and locked himself in his little bunker bedroom. Sherman tries to phone the cops, but they think he’s trying to prank them. The Beast, we see, has the ability to travel from television to television, and unfortunately, Sherman has a tv in his room. He was about to grab Sherman in his crab-like claws, but the Beast gave up when the police didn’t take Sherman seriously.

Sherman’s parents, as well as swingers Cherry and Spiro, arrive soon after. Despite Sherman’s pleas, his mother locked him in the bomb shelter lookalike bedroom so he won’t ruin their evening. He keeps trying to tell them that the monster ate grandpa and is living inside the TV, but his mom doesn’t listen to him.

Meanwhile, Mr. Putterman shows the swingers around and takes them to what the Puttermans like to call the “Pleasure Dome.” Another intergalactic being appears on the TV and tries to warn the couples to destroy their satellite and stop using the television for at least 200 years. Mr. Putterman just takes that as an example of excellent TV quality instead.

Sherman sits in his shelter and watches TV when Medusa asks the viewers to give her a call. Unfortunately for him, she dismisses him and calls him a lunatic. Later, the Beast enters the house’s sex-themed “Pleasure Dome” through the television and eats Cherry while she is waiting for Stanley Putterman in the pool. The Beast then imitates her in order to entice Spiro. He gets into the pool for some fun and ends up at the bottom of it instead.

After a while, Sherman’s parents go to the pleasure dome and find the couple missing. They look at the bottom of the pool and find the Beast lurking in there, waiting for them. It sinks its claws into them and kills them too. Sherman hears their screams and calls the police department again, only to get dismissed once again. As O.D. and his sister arrive, Sherman uses some plastic explosive to break out of the bunker.

Sherman’s sister is skeptical of his monster story, and when they search their parents’ room, they discover doppelgängers of their parents, their grandfather, and the swingers. So, it’s no surprise when she doesn’t believe him. Sherman also starts questioning his reality after that. However, they soon come across the Beast in another room. It pursues them but gives up when it sees O.D.’s heavy metal memorabilia, which he likes because it reminds him of his caretaker’s gloves.

They eventually learn that food and television can be used to pacify the Beast and that they can teach it a few words like “TV,” “music,” and their names. They ponder profiting off the Beast and contact Medusa in the hopes of arranging a television appearance. She thinks they are cuckoos at first but becomes interested when they offer to throw a party.

While waiting for Medusa to show up, the Beast’s alien captor appears on TV to tell the earthlings that they must destroy their television equipment to prevent the Beast from spreading. It makes the Beast agitated, and he ends up eating O.D. The Beast then goes on to eat a police officer who had come to arrest Sherman for the prank calls. Sherman destroys all of the televisions he can find.

Meanwhile, the Pluton alien captor appears on the screen to exterminate the Beast. He tells them that the Hungry Beast are common pets on his planet. However, they are prone to mutations that can make them highly unstable, making them eat everything in sight. When that happens, the people of the planet exterminate them. Unfortunately, this one did not end well for the sanitation department of Pluton.

Medusa, somehow, decides to show up at the house for the promised party. She kills the Pluton Alien, mistaking him for the Beast that Sherman and Suzy had described to her. The actual Beast shows up with a lot of gusto, and the trio struggles to stand their ground. The monster takes a giant breath and eats all three of them.

The next morning, Medusa’s chauffeur is startled awake by a crude impersonation of his boss hiding in the back seat of his car, asking to be driven to the television station.

The Hungry Beast An Alien Monster 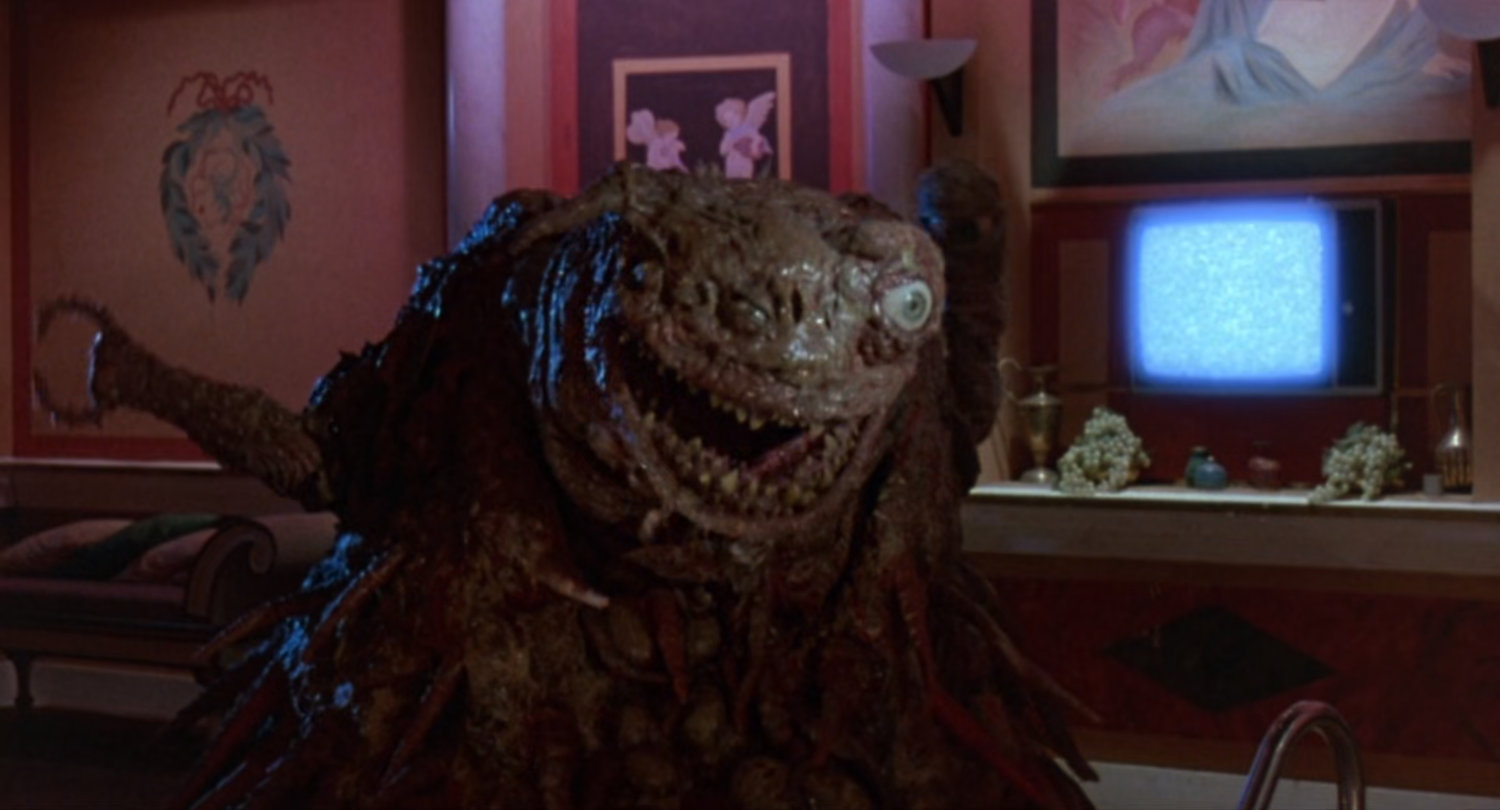 The Hungry Beast is an extraterrestrial creature in the form of invaders like the Thing, Critters, and Blob. It follows the common trend of the time where invaders would arrive and devour humanity in large numbers. Unlike many other films in this genre, the Hungry Beast is depicted as a rogue, and humankind is aided by the Pluton aliens, who see the Hungry Beast’s enormous danger (even though they are kind of responsible for beaming the monster to Earth in an effort to save their own world from its insatiable hunger).

The Hungry Beast started out as a pet on Pluton before it turned into a rogue mutant. It was then turned into pure energy and beamed off-world to protect its residents. Unfortunately for Earth, the Hungry Beast’s energy matched the wavelengths collected by satellites, allowing the alien to invade the world through television sets.

The Hungry Beast appeared to be more comparable to an animal than a fully functioning being at first since it was governed by an inherent urge to consume and hunt. It didn’t help that he spoke no words and was capable only of ambushes. Though he did begin to enunciate a few words by the end.

Despite this lack of spatial and verbal recognition, the Hungry Beast was able to absorb the genetic data of the victims it devoured and could speak by spawning victims’ heads on its tentacles, revealing a far higher intelligence as it used these heads and voice-mimicry skills to evade detection several times and even establish some basic conversation (though it was ultimately still ruled by its hunger over everything else). It was a massive, slimy, and highly creepy creature that made him really fun to watch.

Why should you watch  TerrorVision? 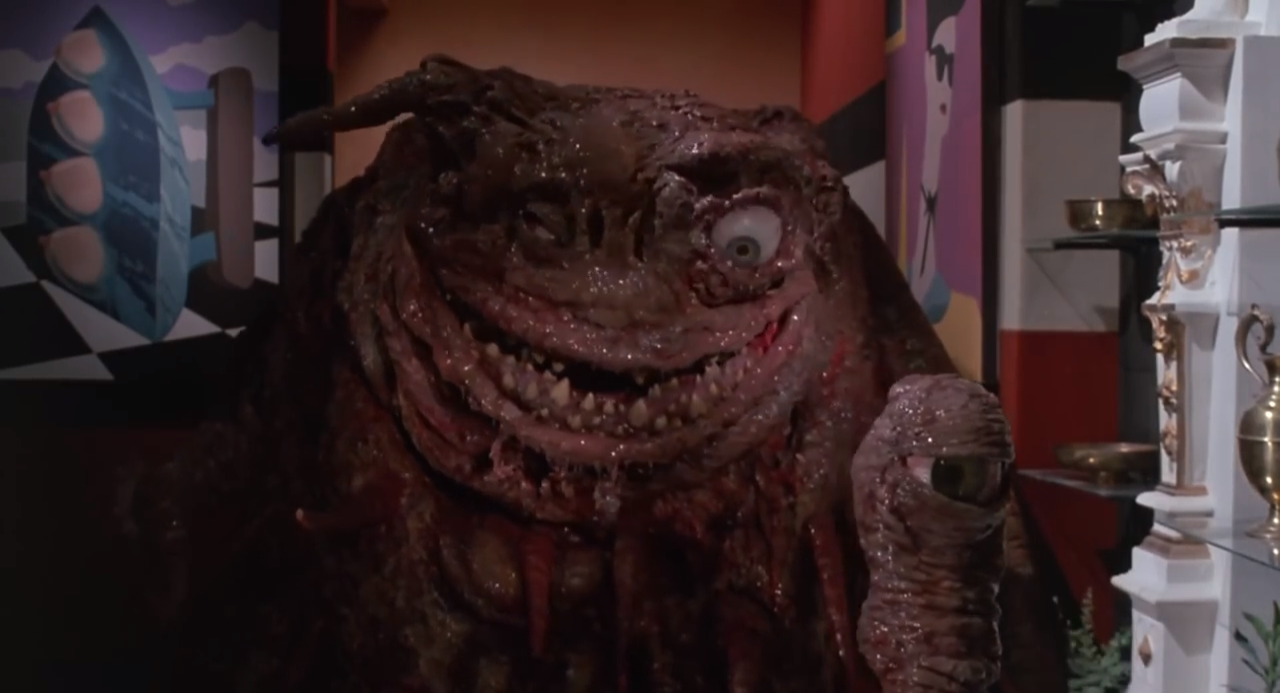 TerrorVision is quite literally a cinematic masterpiece. It is like a highly entertaining and extended version of Tales from Darkside, except it has a lot more adult jokes and innuendos. It has the funniest characters that are capable of transporting you into a world of comfort and pure joy. It was one of the most comedic horror movies I have seen, containing some of the crassest ‘in-your-face’ gore. It is a highly entertaining movie, and it is perfect for a night in with friends and family.