We come across numerous terrifying creatures in fiction and history. These creatures formed part of folklore and mythology at times, while at other times, they were created by authors to give suspense and fear to their readers. H.P. Lovecraft is one of the genre’s most well-known authors.

Throughout his life, he is credited with the invention of numerous such monsters and stories, but he is best known for his fictional grimoire, the Necronomicon or Book of the Dead. The Unnamable is a 1988 film directed by Jean-Paul Ouellette based on H.P. Lovecraft’s short story of the same name from 1923.

The film is about a terrifying entity that cannot be named or described. The film was a low-budget creature feature with both charm and flaws. Mark Kinsey Stephenson, Charles Klausmeyer, Laura Albert, and Alexandra Durrell play the key characters in the film.

THE TALE OF “THE UNNAMABLE” 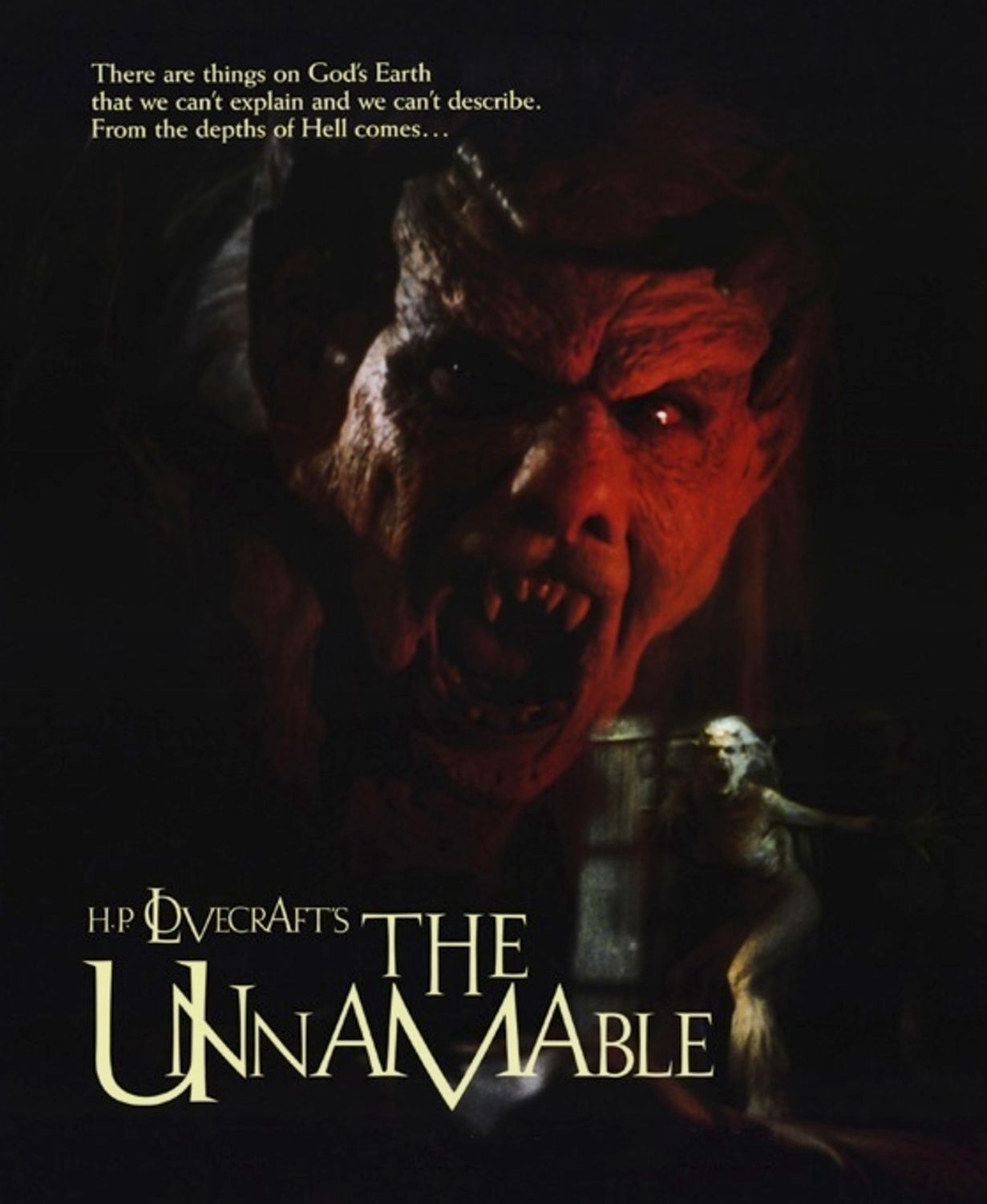 The film begins with Joshua Winthrop, an elderly warlock whose wife bore a creature in her womb that had consumed her on its way out to the mortal realm. To protect mankind from the fury of this horrible creature, the old warlock locked it up in the attic. When Joshua tries to console the creature one night, it tears out his heart. The next morning, we observe a clergyman and a few other helpers burying Joshua’s remains.

To keep the evil out of the house, the clerics said a few prayers. The timeline then jumps to 1988, where three friends are discussing the legend of the unnamed creature in the same house where the horrifying tragedy occurred more than a century before. Randolf Carter tells his buddies Howard and Joel about a child who went insane after staring at one of the house’s windows and seeing the reflection recorded on the glass pane. Joel ignores the narrative because he considers himself a sensible person who would not believe in rumors regarding superstitions.

Carter on the other hand tells him that science is limited to what is known. He goes on to mention that the incident of the boy was recorded in the personal diary of a very ancestor of his and also recounts the incident mentioned by the clergyman to prove the legitimacy of his story. Joel, tired of his goofy friend, asks everyone to spend one night in the abandoned house to prove there isn’t any creature lurking in that house and it is just a myth. Both Carter and Howard refuse since they would much rather prefer the comfort of their dorm to an abandoned run-down house. Joel decides to do it all by himself as the remaining two walk back to their campus.

On the drive back, Carter and Howard debate how they would take the title of cowards if Joel lived to tell the tale, but they would not endanger their own lives. Carter is contacted by Wendy on his way in, who asks for his help with a friend’s homework, which Carter gladly accepts. We catch Howard looking at Wendy as she speaks with Carter and then as she walks out the door. He phones her and apologizes for bothering her and assures her that he was not stalking her, to which she responds that she has no feelings for him and that he should stop following her because they just danced once.

We watch a panicked Howard rush into the library the next morning to warn Carter that Joel hasn’t returned. Meanwhile, we flashback to the previous night, when Joel waits in front of the house until nightfall before entering. He takes a stroll around the home, which is brimming with artifacts. He enters the attic after hearing a few unusual noises and unlocks the door that had held the beast captive for years, only to die at its hands.

Then we return to the current day in the library, where Wendy and her companion Tanya are seen entering. Wendy expresses her gratitude to Carter for his assistance. They are seated at a different table when they are approached by two senior college students, John and Bruce, who invite them to the same haunted house at 8 p.m. Both John and Bruce are waiting for them in front of the house at night.

When both the girls arrive we see Tanya hesitating to enter the house but does so after being convinced by Wendy. They go around exploring the house looking for a conducive place to make love. John and Bruce play a few pranks to scare the girls but aren’t very successful. Meanwhile, Howard bumps into Carter and tells him that Joel was supposed to visit his parents today but hasn’t made it, so they both decide to go looking for him. Back in the house, we see Wendy leave Tanya with Bruce to go and make love with John.

While in the act Wendy first discovers a bone that John dismisses as the doing of an animal, then they find Joel’s ripped head making them scream out in fear. Bruce, on the other hand, tried to force himself on Tanya who refused any physical advances and while they were making small talk after his failed attempt they were startled by Wendy’s scream. All of them try to make their way out of the house but find the entrance to be locked. John becomes the first victim of the creature followed by Bruce who was trying to protect Wendy.

As Tanya tries to open the door, Cartel and Howard enter the house, making Tanya collapse at the sight of their shadow. Both of them try to wake Tanya up and succeed eventually. She tells them of the Creature to which Carter doesn’t believe her, but Howard does. Howard tries to find Wendy with Tanya and Carter stumbles upon the books of the warlock and tries to find a way to defeat the creature. 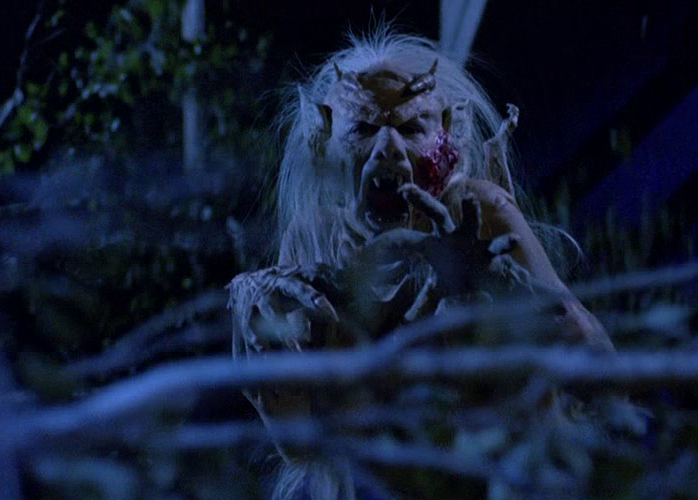 There are many of fun trivia associated with the film. For example, the script was written in seven days and the movie was shot in one week. An ad in the magazine Drama Logue alerted Mark Kinsey Stephenson to the movie. Laura Albert made her cinematic debut in this flick. Laura Albert was sick with a high temperature on the day the library scene was shot. Laura Albert has maintained the sickle she wields in the movie.

WHAT TO EXPECT FROM THE MOVIE 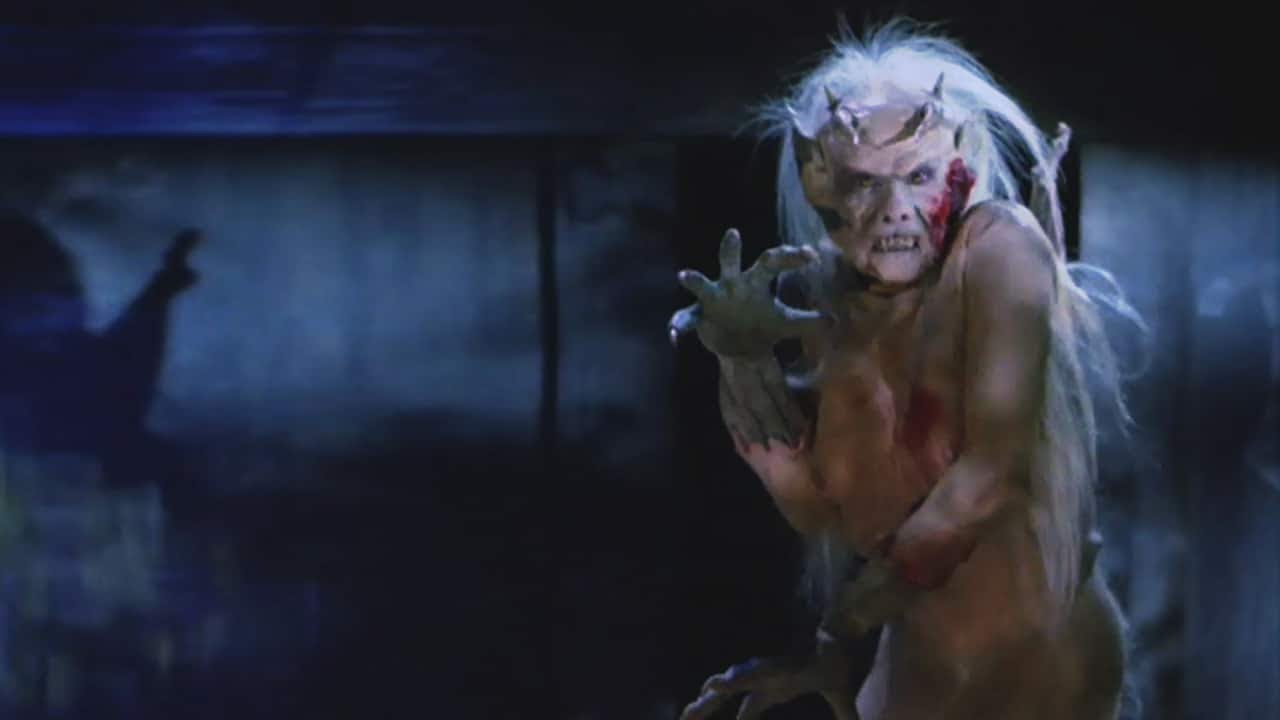 The beast at the core of the storyline is unnameable since its horrors cannot be accurately explained, and the short story of the same name doesn’t really lend itself to a visual format either. As a result, producing a film about something nebulous, unquantifiable, and entirely inexplicable feels like a miscalculation. However, director Jean-Paul Ouellette tried his best on showcasing the indescribable creature with little to no description that was available to him from the short story considering its namesake.

Given that the film was released in 1988, the absence of visual effects is understandable. But what he was able to capture was the thrill of a horror film giving the audience moments of gut-wrenching solicitude. There are all of the expected elements: dim lighting, inexpensive sets, amateur camera work, murky images, and a disorganized plot.

The sound effects however are absolutely elementary and miss the mark completely at gripping the audience and rather come off as almost unnecessary in some parts, every stride is exaggerated. Other sounds have an unneeded and obnoxious echo effect applied to them.

This was most likely done to add creepiness to an otherwise uninteresting film, but it quickly becomes annoying. The house depicted in the movie falls short of its 20th-century construction in depicting a house from the 17th century. The actors do the job to the best of their abilities but fall short in capturing the essence of fear instilled by the creature. As is the case with most low-budget horror flicks from the 80s.The only actor who still does alright is Katherine Alexandre as the Creature. 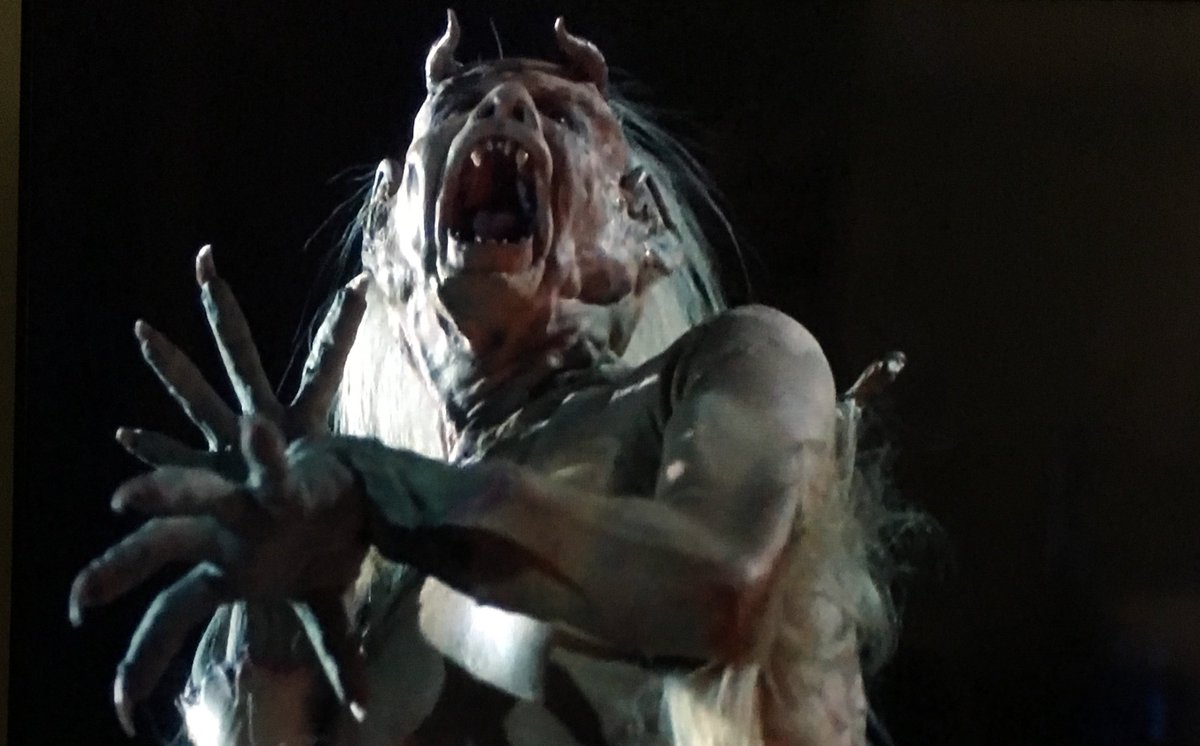 Randolph Carter, describes the creature as devil-like, with four-inch horns, hooves, and a human-like appearance. The picture of the monster was supposed to be permanently carved on the house’s windows, from which it looked out. The creature as depicted in the movie has horns, hooves, white hair and white hairy legs resembling the lower body of a goat. It has pale wrinkled skin and the ears of an elf.

Allyda also has small wings on its back which aren’t functional but have significance on why the creature is named Allyda, as Allyda in Latin means the “small winged one”.The creature does not seem to have any remorse or any joy but only insatiable hunger. The irony though is depicting a creature that cannot be described or named.

THE SEQUEL TO “THE UNNAMABLE”

The Unnamable II: Randolph Carter’s Statement (also known as The Unnamable Returns) is a horror film directed by Jean-Paul Ouellette and released in 1992. It combines aspects from H.P. Lovecraft’s short tale “The Statement of Randolph Carter,” and is a sequel to The Unnamable, which is partially based on Lovecraft’s short story of the same name. Mark Kinsey Stephenson and Charles Clausmeyer reprise their roles as Randolph Carter and Howard, respectively, from the previous film. Professor Warren is played by John Rhys-Davies, and the dean of the university is played by David Warner.

The film begins outside the Winthrop house, which is crowded with police officers and medical technicians, much as it was in the previous film. Howard is being brought into an ambulance with three large gashes on his chest, Tanya is being placed in a police car, and Randolph is holding Joshua Winthrop’s book of spells, which he hands to Howard to keep safe. Randolph approaches the university’s Dean about the home, and the Dean advises him not to become involved in things he would never understand. Randolph then approaches Professor Warren, who accepts Randolph’s offer of assistance.

Howard has pulled along, and the three of them arrive at the location where Randolph emerged from the earth in the first film. Howard is to maintain vigilance by being near the vehicle. Warren and Carter eventually discover Alyda, Joshua Winthrop’s demon daughter, encased in the roots of the tree that took her out of the home in the first film. To rid her body of the demon, Warren injects the horrific monster with insulin.

This strategy succeeds, as she emerges as a stunning lady, nude and entangled in tree roots. Sugar is given to her to help her recover from an insulin overdose, and the two release her from her shackles. However, the demon remains in the tunnels and begins hunting Alyda down so that they can reunite. Randolph defeats the demon during a fight in the Arkham Library, but Alyda dies at the same time.

LAST BUT NOT THE LEAST

The Unnamable isn’t a great film, but Randolph Carter and Howard Damon’s low-budget pair is entertaining to watch. The film gets brought out of the muck of dead-teen flicks from the 1980s and onto the shelf of Lovecraftian cinema thanks to Ouellette’s restrained direction, Stephenson’s performance as Randolph, and Alexandre’s stunning portrayal of the beast. The film is rather old, which is both an advantage and a disadvantage. It’s entertaining as a throwaway film from the 1980s, but don’t anticipate anything more.