The 1980s marked a significant shift from what we now refer to as modern society. As is typically the case with horror films, it is due to the way society was structured in the 1980s. Slasher movies were frequently released to satiate the curiosity of viewers and enthusiasts.

As a result, numerous films that could be made on a budget were released in the 1980s, and enthusiastic audiences packed the theatres to see forbidden or contentious subjects. The Zero Boys, written and directed by Greek lunatic Nico Mastorakis, is one such undiscovered masterpiece.

Zero boys, or a different take on Friday the 13th? 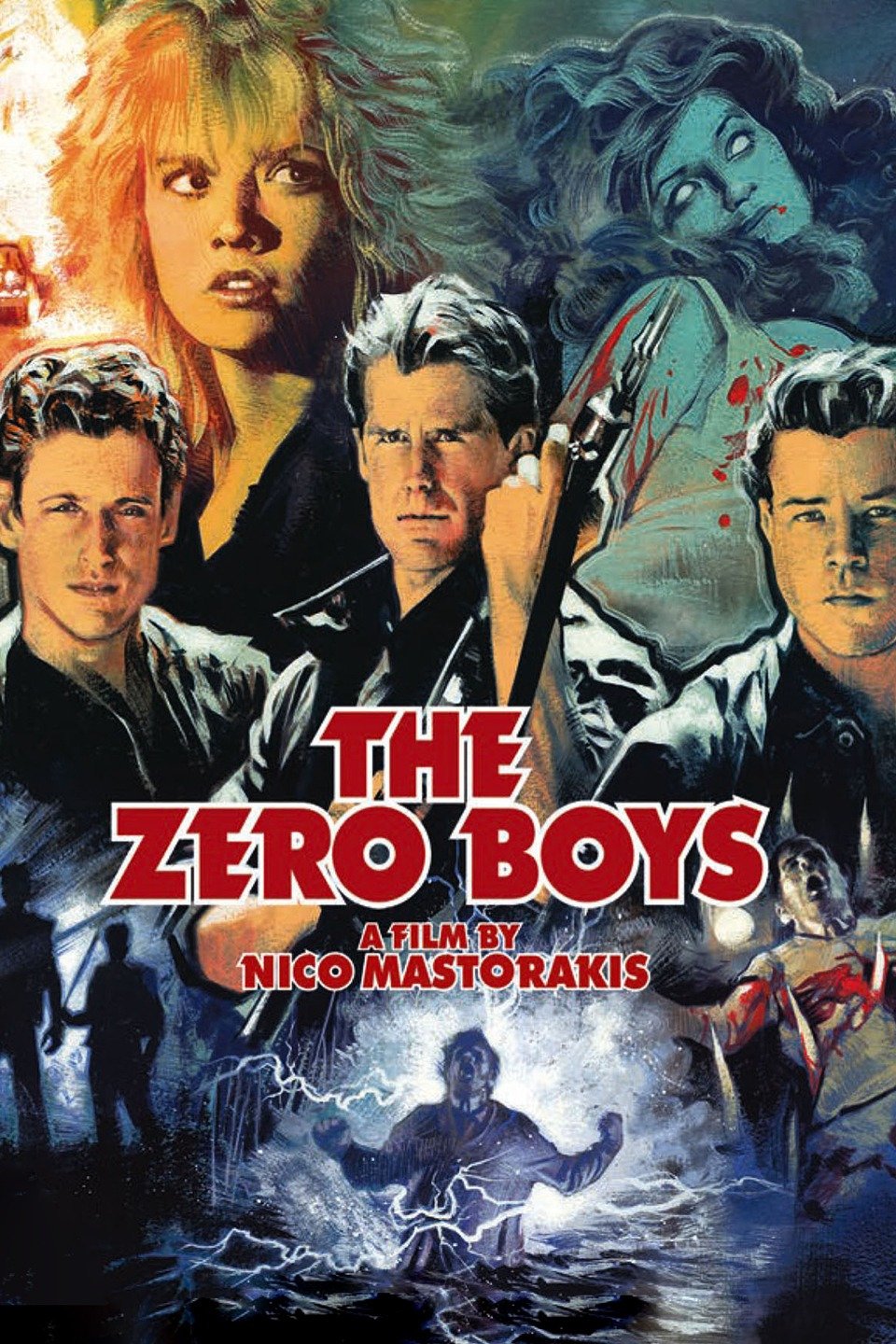 The action film that starts off as a western-style gunfight ends up being a paintball competition between two groups. Steve, the main character in our story, helps the winning team, the Zero Boys, win the game. Larry and Rip are additionally a part of the ensemble.

The three intend to head to the woods in the mountains to celebrate their victory with Sue and Trish, Larry and Rip’s girlfriends. Steve might have Casey’s girlfriend, Jamie, for a day if Steve and the Zero Boys win, according to a wager made by Casey, the opposing team leader. The bet between Casey and Steve, which Jamie believes was really Steve’s idea, has clearly offended and infuriated Jamie.

The six leave for the celebrations and pick up a few things before heading towards the woods. The group reaches the woods, where Jamie seems distant and bored. Trish asks Steve to open a can of beer, and Trish asks him to talk to Jamie. Larry expresses his feeling that Jamie would be a pain in the ass, to which Steve says, “She’ll come up.”

Larry further asks how someone can date Casey, and Steve says curiosity, clearly indicating Steve is the mature one in the gang. Steve goes to keep Jamie company, and the two seem to match each other’s vibe. Jamie enjoys Steve’s company and opens up to him. Suddenly, the group hears the scream of a woman. They pack their things and get in their truck to look for the woman screaming. While searching, Jamie spots a woman running through the woods, but she disappears when Steve and Jamie go to investigate.

Steve spots blood on the trees and comes across a cabin in the woods. The group heads to the cabin to see if anyone lives there, but they find the house empty. Sue has the idea of chilling in the home, and Steve agrees to stay for a while. Rip finds a note on the fridge that was left for guests of the owners of the house. They decide to stay at the cabin for a while, but Steve is against the idea.

A bit later, Steve signals something to Sue, and she goes out to grab their things from the truck when she feels the presence of someone in the woods. She thinks it is her friends trying to scare her, but when she does not get a response, she goes back in.

After Sue goes in, the group celebrates Rip’s birthday and their victory. After Rip cuts his cake, he takes his present, Sue, to the bedroom upstairs to have sex. Upstairs in the bathroom, Rip scares Sue by pretending to drown in the bathtub. Back downstairs, Larry and Trish make out, so Steve and Jamie head out to the front porch to sit on the swing, where the two get to know more about each other and end up kissing. In the additional bedroom, where Larry and Trish are having sex, Trish seems to notice a pair of eyes staring at them from a crack in the ceiling.

Larry gets annoyed and thinks Trish is faking and not enjoying the moment, and the two end up in a fight. Jamie finds a bone outside by a lake that she says is a human vertebra, but Steve thinks it could be from anything from a coyote, bobcat, or even a bear.

Steve throws the bone in the lake and takes Jamie back inside as it gets cold outside. After they head inside, seeing Trish and Larry fight, Steve asks about what happened, and Sue tells him that Trish thinks she saw someone staring at them while they were having sex. Jamie gets the idea to leave the house and head to a disco. Everyone agrees and heads for the truck, where they find the engine fried out.

A horrified Jamie calls Steve and says she saw someone with a knife stalking them from afar. But the rest see no one and think Jamie might be scared and hallucinating. It starts to rain suddenly, and with nowhere to go, the group heads back inside. When they head inside, the power seems to have run out, and Steve suggests they check the generator. The guys take out their guns, and Jamie is shocked to see the boys carrying real weapons.

Rip and Larry head out to the generator room, where Larry scares Rip and references Jason from Friday the 13th. The two start up the generator and turn to leave when they see someone run and hide from behind them with a knife. They hurriedly leave the generator room, and Rip stumbles upon a bunch of human skeletons. Everyone is shocked to learn of the dead bodies after Larry and Rip run to the house.

Everyone hears a woman’s screams again, like before, which are coming from the barn outside. Steve, Larry, and Rip head to the barn with their guns, where they discover a torture chamber equipped with a video camera and TV. The killer tortures a girl whose screams the group heard earlier.

Meanwhile, the three girls block the cabin door using a big box. Since it is so heavy, Trish thinks someone is inside the box, and the other two girls tease her by telling her to open it. Trish and the other two open the box and find a dead girl. After seeing the dead body, Trish throws up and goes upstairs to clean up in the bathroom, even though Steve asked them to stick together.

Jamie tells her to stay together, but she does not listen and goes alone anyway, where the killer kidnaps Trish once he gets the opportunity. Shortly after, the boys return to the house, where they see the body and learn of Trish’s disappearance. They hear Trish’s screams and see someone taking her inside the barn and rush to save her but find the door locked.

They see Trish being tortured by someone inside through the barn door cracks and shoot at the lock, but as if by magic, no one is there; when they go inside, they find some cameras and monitors showing someone torturing Trish as if to mock them. They are angry and shoot at the monitors and cameras to vent their frustration and knock down a glass to reveal a torture room.

Inside, they find another trap door the killer must have used to take Trish away. Steve finds a bunch of dynamite that they keep. Steve and Larry return to the house, where they are greeted by a phone call from the killer, who psychotically tells Steve he will kill Trish since they destroyed his equipment. Everyone starts hearing footsteps and dragging noises from the ceiling when suddenly a trap door opens from the roof, and Trish falls through it wrapped in a plastic bag.

It looks like the killer killed her by suffocating her with the plastic bag, and Larry cries, holding her in his arms, but she turns up to be alive, to everyone’s relief. The group slowly recovers from the whole thing, and Steve and Larry sit by Trish and ask her about the killer; she says that the killer asked her to tell Steve that all six would die a slow death.

Everyone starts to prepare to leave the area when Jamie looks out the window and finds their truck repaired and ready. Meanwhile, Sue finds a woman’s severed head inside the fridge and freaks out. Everyone runs for the truck and flees the place after using the dynamite from before to blow up the killer’s car.

On their way out of the woods, Rip starts celebrating as if they had escaped from the hands of the creeps when suddenly, an arrow hits Rip, killing him on the spot. Steve drives the truck to get out of the woods but is stopped by a fallen tree, trapping them in the woods. Steve says it is a trap and gets everyone out of the truck, but Sue refuses to leave Rips’ body behind.

Rips’ body is placed at the back of the truck. Steve convinces her to go with them. As they run, we get a glimpse of two shadowy figures, revealing there are two killers, not one. Meanwhile, Jamie falls behind while tying her shoelaces when she hears a metallic noise, which turns out to be one of the killers standing afar with a machete, mirroring Jason from Friday the 13th.

She runs through the woods and stumbles to the ground while the killer approaches. Jamie hides in the tall grass to hide from the killer, and he starts cutting the grass. To Jamie’s relief, the killer seems to get far from where she hides, and seeking an opportunity, Jamie makes a run for it. Running uncontrollably, Jamie comes across the dead body of a mechanic hanging from a tree when Steve finds her and takes her away.

As the group reunites and continues their escape, Sue falls into a booby trap filled with poisonous spikes. Steve, Jamie, and Larry form a human rope to rescue Sue to safety, and Trish sits by a tree, resting her injured leg. While they save Sue, one of the killers appears from the woods and shoots crossbows at Steve. Trish guns him down and saves the lives of Steve and Sue in the process. Short of Rip, the group recollects and continues looking for a way out.

Steve and Jamie leave Larry, Sue, and Trish in a small barn they come across in the woods to look for help as Trish is slowing them down. Elsewhere, the other killer finds his partner’s body, lying in the trap set by them, stabbed by the spikes inside. Steve and Jamie are the targets of another trap, leaving them hanging upside down from a tree. The two somehow cut free from the ropes and got back up. Meanwhile, the killer comes across the small barn Larry, Trish, and Sue are hiding under.

To rat them out, the killer uses a snake to scare them, but the three calm themselves enough to not react, and Larry grabs the snake and kills it using his knife. Steve and Jamie cross a lake using a tree bridge when the killer jumps out of the water and shoots Steve with two arrows. Jamie electrocutes the killer with her stun gun by putting it in the lake, but she fails to kill him, so Steve shoots and kills him. Jamie embraces an injured Steve as the camera pans towards the sky, lit by a rising sun. The movie ends on a cliff note as we see another man sitting on top of a tree, pointing his gun toward Steve and Jamie, revealing a third killer. 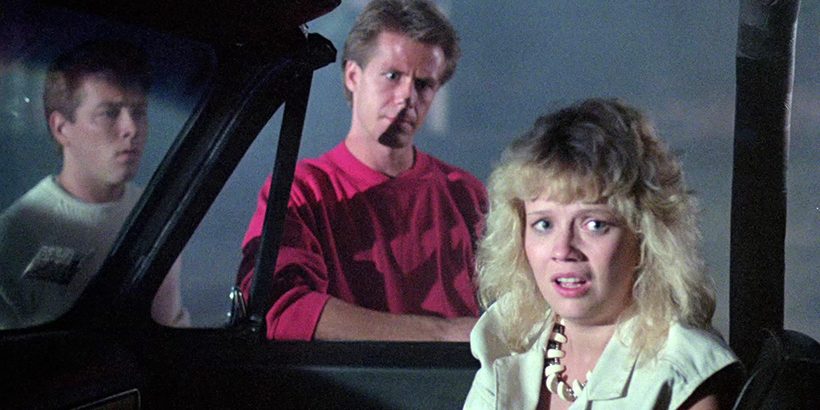 “The Zero Boys” is mostly a reattempt at the classic 80s action-horror franchise, Friday the 13th. The most surprising thing to catch the attention of the viewers would be the involvement of music and compassion legend Hans Zimmer. The group discovers a horrific massacre on a trip into the mountains with their girlfriends.